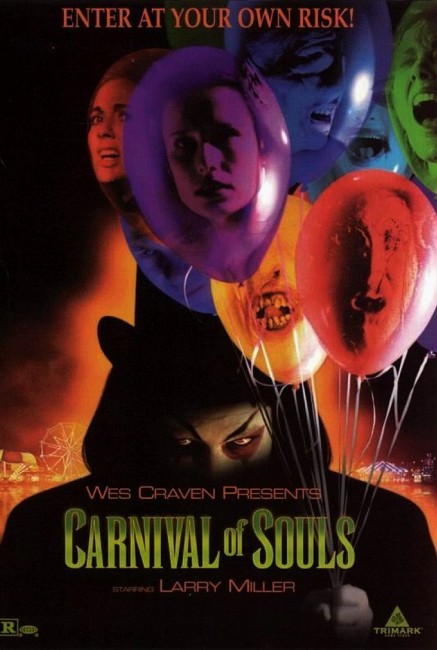 Alex Grant, owner of the Mermaid bar, starts to have a series of bizarre hallucinations in which she is taunted by nightmare creatures. Also in these dreams is Louis Seagram, the carnival clown who befriended her mother and then molested Alex as a child but is now dead, possibly due to Alex’s actions. The carnival on the other side of the bay draws her back to it, even though it has been closed for many years. Soon Alex is no longer sure any more what is real or what is hallucination.

In the 1980s, Carnival of Souls (1962) was revived and became one of the great rediscovered genre classics. It is a film that exerts a creepy, unsettling atmosphere that is hard to shake – you can understand why it became a cult film carried by word-of-mouth reputation.

That renewed interest then resulted in this colour remake, which has been produced by genre directors Wes Craven and Anthony Hickox, known for Waxwork (1988), Sundown: The Vampire in Retreat (1989), Hellraiser II: Hell on Earth (1992) and Warlock: The Armageddon (1993). It is an interesting creative team-up. Wes Craven and Anthony Hickox are directors whose work is at almost entirely opposing ends of the genre spectrum – Craven’s films are cerebral and deal in the overlapping of dream and fiction with reality, while Hickox’s films are splatter and effects driven and only regurgitate old genre themes or are sequels to other people’s films. The Carnival of Souls remake not too surprisingly falls between the two influences.

The director is Adam Grossman who previously made the extremely silly Sometimes They Come Back … Again (1996) and has failed to do anything subsequently. Not too surprisingly, the remake lacks all the things that made the original work so well. For one, it abandons black-and-white for colour and shoots in a California coastal town rather than the banal, smalltown Utah locations the original chose. Thus this Carnival looks like any other contemporary horror movie whereas the sheer ordinariness of the original in comparison to its contemporaries made it seem unique.

Moreover, this is a Carnival of Souls that comes too much in the shadow of the A Nightmare on Elm Street (1984) and the Hellraiser (1987) makeup effects driven horror film. It features numerous sewn-shut face creatures and reality/dream intrusions, but none that amount to anything memorable. (Although there is one good scene where the heroine goes to visit her psychologist of several months only to be told he has never seen her before).

The remake appropriates various images from the original such as the car crash off the bridge, the sinister man following the heroine and the carnival itself. Unfortunately, where the original wound its happenings into a highly effective deathdream revelation, the remake makes no sense whatsoever. It adds a banal plot about The Man now being a pedophiliac clown from the heroine’s childhood. While the film hints at her having done horrible things and possibly having been responsible for killing the clown, it offers absolutely no answers. We are not even certain whether the scene where she drove off the pier with him in the car was dream, reality or hallucination as the film contradicts what it says about this at other points. In fact, Adam Grossman blurs the line of reality and hallucination so frequently it is impossible to make any sense whatsoever out of what happens in the film.

Bobbie Phillips, an actress whose career has wavered between bimbo parts and serious drama, is bland and not up to carrying the lead role. One was reminded one far too much of Larry Miller’s comedy roles, notably as the hamster-raped dean in The Nutty Professor II: The Klumps (2000), to take seriously. He plays rather campily. However, there is a surprisingly good performance from Shawnee Smith, once the heroine in The Blob (1988). She is never better than when she gets to sing – and in her own voice too.