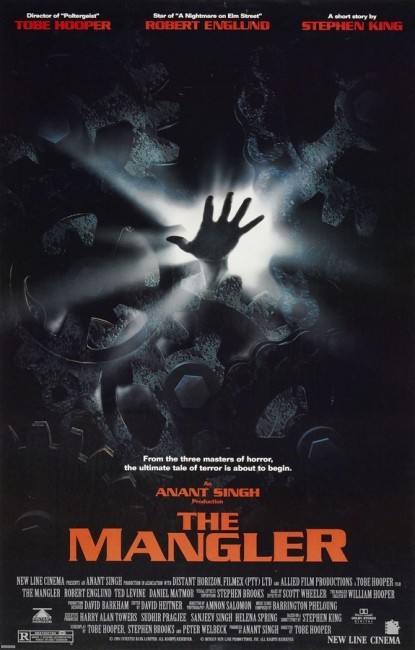 People are being killed at the Blue Ribbon Laundry in the town of Riker’s Valley, Maine. Local police officer John Hunton investigates and realizes that the Blue Ribbon’s owner Bill Gartley and a local judge are conspiring to cover the deaths up. Along with his neighbour, anthropology student Mark Jackson, Hunton comes to believe that The Mangler, the laundry’s giant clothes press, has become possessed. They also discover that the firstborn children of the town’s elders have all been sacrificed to the mangler on their sixteenth birthdays. Hunton realizes that the only solution is to conduct an exorcism of the mangler.

After making the original The Texas Chain Saw Massacre (1974), director Tobe Hooper was once seen as one of the leading lights of the horror genre. The three decades since then have not been kind to Tobe Hooper. One tried to defend Hooper against his naysayers for as long as possible. Salem’s Lot (1979), Poltergeist (1982), Lifeforce (1985) and The Texas Chainsaw Massacre 2 (1986) are all far better efforts than many at the time gave Hooper credit for. However, Hooper’s decline throughout the 1990s and 00s has been truly sad to watch with dismal efforts like Spontaneous Combustion (1990), I’m Dangerous Tonight (1990), Night Terrors (1993), The Mangler, The Apartment Complex (1999), Crocodile (2000), Mortuary (2005) and Djinn (2013). The decline is something akin to seeing a Nobel Prize laureate having been reduced to an advanced Alzheimer’s sufferer.

The film adapts an enjoyable Stephen King short story The Mangler (1972), which appears in the Night Shift (1977) collection. The King story has a neat succinctness. It was based around an implausibly absurd idea – that of a possessed laundry press – which King played with perfectly droll seriousness for the sheer joy of doing so. It is a story that is well suited to film – it has a straightforward simplicity that writes itself.

Alas, Tobe Hooper and collaborators manage to mangle the story completely. Grafted onto the possessed mangler story is now a ludicrous plot about the townspeople engaged in an inexplicable conspiracy to feed their children to the mangler as some modern incarnation of Moloch in return for success, prosperity and a fertile valley. Here the story tries to have its cake and eat it – at one point, the film suggests that we have a child sacrifice devouring demon laundry machine but then it also tries to incorporate the elements from the original short story about virgin’s blood and belladonna accidentally dropped into the mangler bringing it to life. As a result, both explanations end up at contradictory cross-purposes with one another to thoroughly confusing effect. It is never clear, for instance, what the locals were sacrificing their children for or why the townspeople have one finger chopped off.

Furthermore, when it comes to the aspects taken from the Stephen King story, the film fails to retell them with the evident drollness that King did and the results are thoroughly silly. The silliest of scenes is when the film introduces nonsense about the mangler’s evil also managing to possess an icebox whereupon Tobe Hooper tries to make scenes of Daniel Matmor with his arm jammed in an icebox door seem scary.

If the film’s problems ended there, The Mangler would probably be merely misjudged. It might even have been possible that the film could have been saved if other aspects had been up to scratch. However, the film is lamentably mangled in other arenas as well. One of the worst aspects is the acting. Ted Levine, who had just come to notice as the serial killer Buffalo Bill in The Silence of the Lambs (1991), is badly miscast as the hero and plays as if he is drunk. Robert Englund, a regular Tobe Hooper collaborator, gives a typically awful performance, while for some reason outfitted with a set of leg braces, crutches and an eye patch behind his glasses.

One of the film’s silliest aspects is the design. Everything seems designed and costumed to a point of cartoonish realism – from Jeremy Crutchley’s press photographer who seems a ludicrous caricature of what people imagined a press photographer was in the 1940s to Robert Englund’s overdressed villain to the laundry itself, which becomes a sweating foundry that has pits in its basement that seem to go all the way to the bowels of the Earth. The most absurd of all is the design of the mangler, which goes from what should be a standard machine of about ten feet in length to something over 40 feet high.

There were two sequels:– The Mangler 2 (2001), which was in fact about a malevolent computer virus named The Mangler, and The Mangler Reborn (2005), which does return somewhat to the first film/short story featuring a man who buys the mangler in an auction and that starts feeding victims to it.