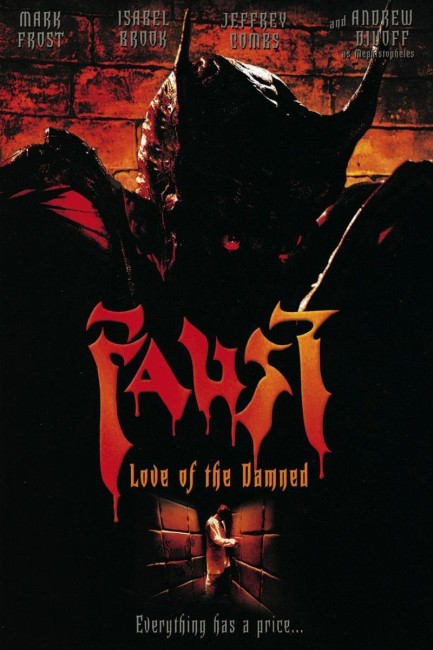 Police detective Dan Margolis arrests a man who has slaughtered the entire Chinese embassy using a set of bladed gloves. The man is placed in an asylum where psychologist Jade de Camp labours to connect with him using unconventional music therapy. She is able to get through and learns that his name is John Jespers. John tells how he was an artist until his life was shattered when the Russian Mafia murdered his illegal immigrant girlfriend. He was about to jump from a bridge when he was approached by the enigmatic M who offered him a deal – vengeance in return for John signing a contract for his soul. He agreed and was transformed into a steel-clawed figure, invulnerable to damage. However, after exacting his revenge, John found that as part of the contract, M could send him to kill at will. He refused to be a part of this. Now, M’s occult cabal, The Hand, snatch John from the asylum and M has John buried alive for defying him. When John realizes that Jade’s life is in danger, he returns from the grave as an avenging demon to save her and stop M.

Yuzna seemed perfectly suited as a director to make Faust: Love of the Damned, which is adapted from the graphic novel series from Avatar Press. The Faust: Love of the Damned graphic novels, which began in 1989 and are still being published, created a censorship storm when the series came out. They garnered a reputation as containing some of the most out there sexual and horror content of anything in the graphic novel market, with some comic stores refusing to stock the series. The film version here looked the most promising of all of Brian Yuzna’s films, at least going by the pre-publicity material. The graphic novels had a cult following and the central concept of an avenging demon superhero seemed to hold the potential to be something along the lines of another The Crow (1994) or to be what Spawn (1997) promised but failed to deliver.

Alas, Faust: Love of the Damned is a thorough disappointment on all accounts. The film promises a great deal at the outset – a soul-scouring journey into darkness the way The Crow did, the way the Spawn graphic novel and animated series did. Instead, it emerges as a version of Spawn as directed by Stuart Gordon or conducted as one of the A Nightmare on Elm Street sequels and filled with campily over-the-top splatter effects. As he has upon several other occasions, Brian Yuzna relies on the surrealistic makeup effects of Screaming Mad George. However, these are frequently ridiculous. The most preposterous of these is a scene where Andrew Divoff causes a woman to grow a giant set of tits and then melt down until she is nothing more than four lumps of breast and buttock.

Crucially, where Faust: Love of the Damned fails is in its lack of any darkness. Mark Frost’s performance in the demonic anti-hero role is conducted with a single bug-eyed expression. It is a one-note performance with no variation. Even more so, there is no passion to the romance. When you consider that Isabel Brook is someone that Jaspers has come back from the grave for because he loves her, Brian Yuzna’s failure to invest any type of passion in the relationship amounts to an almost complete indifference to the tone of the film. Beyond this, the film’s failing of mood extends to the writing of the script (which comes from one of the authors of the graphic novels). Characters make random changes throughout – Jeffrey Combs starts out for at least half the film as a sympathetic detective then suddenly makes a random change to become one of M’s slavish acolytes; Isabel Brook sells her soul to save Frost but then is simply able to stand up and reclaim it at the end; while Jespers wavers between being a bad guy mass murderer and a sympathetic avenging hero without clear distinction. We are not even clearly sure why M is obsessed with capturing Isabel Brook after he buries Mark Frost.

However, the biggest plausibility gap is where Jespers/Faust, after selling his soul to M, is suddenly able reclaim it and affect a resurrection from the dead. There is a stunning lack of how and why he is able to do such a thing. One tends to feel that selling one’s soul is something that should have a total and utter finality of choice to it – it should be something irreversible, not something akin to a movie hero bullet wound that they can suddenly shake off and get back up from.