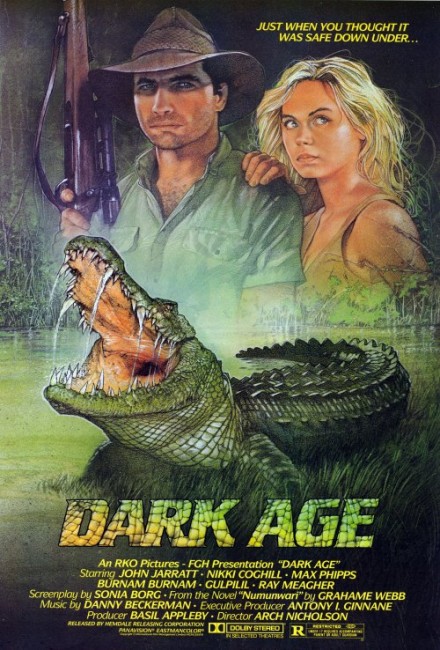 Two men are killed by a giant crocodile while out poaching on the river near Malparinga in Australia’s Northern Territories. Local ranger Steve Harris goes out in search of the crocodile but the local Aborigines tell him that he cannot kill it because it is Numunwari, a dreaming crocodile. The crocodile then devours a child in a nearby Aborigine village. Steve’s superiors demand that it be found and killed. To Steve’s upset, they bring in hunters who indiscriminately kill any crocodile they find. Steve instead joins forces with the Aborigine elder Oonabund in a more dangerous effort to capture the Numunwari and return it to its homeground.

Dark Age is the inevitable outthrust from the success of Jaws (1975), which spawned a great many copycat films about rampaging ocean-going and land-based predators. Although we had plenty of crocodiles menacing people in 1940s adventure films or the likes of Live and Let Die (1973), even Neville Brand feeding people to his pet croc in Eaten Alive (1977), these were more wilderness encounters and Dark Age was the first of these to use a killer crocodile as a premise for a monster movie. The killer crocodile film has grown up into its own mini-genre since then with the likes of Killer Crocodile (1989), Lake Placid (1999), Crocodile (2000), Dinocroc (2004), Croc (2007), Primeval (2007), Supercroc (2007), The Hatching (2016) and Crawl (2019). Australia has produced the two best entries in the genre with Black Water (2007) and Rogue (2007), the latter also paying homage to Dark Age by featuring an appearance from this film’s hero John Jarratt.

Dark Age comes from Arch Nicholson who previously had worked as second assistant director on one of Australia’s best Jaws copies, Russell Mulcahy’s killer boar saga Razorback (1984). Nicholson has made a handful of films, none of any distinction, then vanished into Australian tv and did nothing of note before his death in 1990. The most notable name on the credits is that of executive producer Antony I. Ginnane, who was behind many of the classic films of the great Ozploitation fad of this era, including Patrick (1978), Harlequin (1980), Strange Behavior/Dead Kids (1981) and Turkey Shoot (1983), among others. Dark Age was not seen in Australia for many years, due to its release being held up by the financial collapse of the US distributor Embassy Pictures in 1986.

While on one hand Dark Age wants to be a copy of Jaws, it has another serious side to it that makes it more than just the average Ozploitation film. There is a theme wound in throughout about the conflict between white European culture and native Aborigine ways. You can see this contrast from the earliest sections when the party led by Max Phipps set out to go crocodile hunting amid making derogatory comments about the Aborigines and are promptly devoured, which is contrasted to hero John Jarratt who is seen working with and treating Aborigine culture with respect. Later in the film, Jarratt is the only one white person who is able to get a handle on the menace because of his willingness to look at it through Aborigine eyes.

In many respects, Dark Age feels like a Jaws copy mixed with Peter Weir’s The Last Wave (1977). The hero in both films has the same arc – where he must take a step beyond Western culture with its reason-based outlook and accept an Aborigine mystical worldview in order to understand the nature of the menace. Certainly, this pro-Aborigine outlook gives Dark Age a very different subtext to most other Jaws copies – for one, the climax of the film is about trying to save the crocodile rather than kill it.

Outside of this, Dark Age follows the usual run of Jaws cliches and plot tropes – the lone law enforcement officer who is the only one that takes the reality of the menace seriously; the authorities who want the menace downplayed/covered up and are prepared to take shortcuts for the sake of business interests; their authorising a wild hunt that brings all and sundry out to chase the prize money, causing chaos; and the climactic scenes where the hero goes out to hunt the monster alone in a small boat accompanied by an expert hunter.

The major complaint of the film is that while it is interesting in terms of script, Arch Nicholson never does much on a directorial level. There is one good scene where Nikki Coghill races to save an Aborigine child as the crocodile comes in the water, only for Nicholson to defy cinematic taboo and have the child devoured. There is also a good scene towards the end with John Jarratt and the Aborigines in a small dinghy attempting to spear the vastly outsized crocodile with harpoons, which plays out with undeniable tension.

The actual appearances of the crocodile are scarce – one suspects the reason for this is the same one that plagued Jaws, lack of convincing effects in this department. The film climaxes with the good old Ozploitation standard of the car chase, which seems disappointing in the need to throw in some contrived tension, not to mention left field black hat villainy that emerges at the last minute. With most of the rest of the film taking place on the water, these scenes abruptly jump tracks and place the action on land.

There is certainly good photography of various regions around Australia that include Cairns, the far north of Queensland and Alice Springs. A young and handsome John Jarratt, later to gain fame as the psychopathic killer in Wolf Creek (2005), plays with a very intent and serious expression.

Dark Age is discussed in the documentary Not Quite Hollywood: The Wild, Untold Story of Ozploitation! (2008).