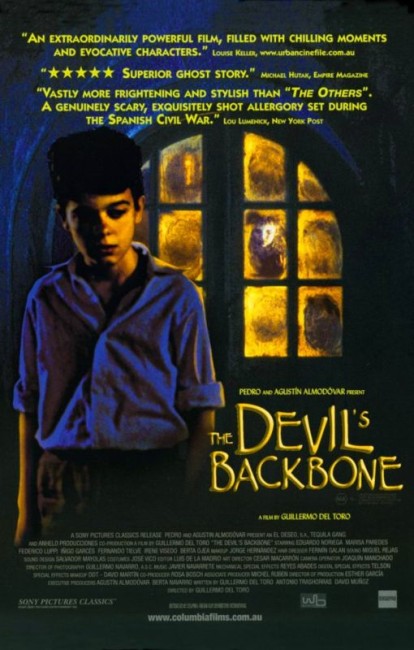 During the midst of the Spanish Civil War, young Carlos is placed at a remote and impoverished orphanage set up to take care of boys whose fathers are off fighting for the socialist cause. Once there, Carlos becomes certain that he can hear and see the ghost of another boy Santi who previously occupied his bed and drowned in the pool in the cellar. At the same time, the orphanage’s safety is threatened by the tensions between the suppressed desire of Dr Casares for the headmistress Carmen, her affair with the handsome younger handyman Jacinto, and Jacinto’s determination to obtain the gold bullion hidden in the building that Carmen is guarding for the socialists.

Mexican-born Guillermo del Toro first emerged as a director of great promise with the vampire film Cronos (1993). Del Toro then came to the US mainstream to make the modestly effective giant bug film Mimic (1997), which proved a little too quiet for most audiences and vanished without a trace, and then went onto Blade II (2002), the graphic novel adaptation Hellboy (2004), the highly acclaimed, awards-winning fantasy Pan’s Labyrinth (2006), The Shape of Water (2017) and Nightmare Alley (2021). In between his Hollywood sojourns, Del Toro went to Spain to make The Devil’s Backbone, which is produced by no less than Pedro Almodovar.

Guillermo Del Toro has drawn clear inspiration for The Devil’s Backbone from The Sixth Sense (1999) and its central image of a child able to see and communicate with the dead. The makeup effects on the ghost boy certainly make him look unsettlingly spooky. Del Toro crafts his appearances with unsettling effect – there are at least two very intense scenes with the dead boy coming after Fernando Tielve.

However, The Devil’s Backbone is also a horror film that seeks to be more than a horror film. As important to it as the horror element also seems to be the historical setting. (Guillermo Del Toro has a great fascination with the Spanish Civil War, using it also as a setting in Pan’s Labyrinth where fantastic elements were likewise contrasted against the grim realities of the historical era).

Del Toro does a fine job in the crafting of a beautifully photographed sense of place and in building the characters around the orphanage and their inter-relational dramas. These scenes are given as much weight as the supernatural scenes, resulting in a ghost story that seems an odd cross-genre hybrid. Indeed, in the US, The Devil’s Backbone went out as an arthouse release and was greeted more by the foreign language crowd than those who seek out genre-identifying horror, even though it was given ample coverage by genre magazines.

For all that, The Devil’s Backbone feels like a good but never fully satisfying film. For one, the denouement is surprisingly traditional. For all the chill dread eeriness that Guillermo Del Toro evokes the appearances of the child with, its revelation as merely a child seeking retribution for its murder seem a little banal and ordinary in proportion to the build-up. Dozens of other ghost stories have conducted variations on such a plot denouement and one anticipated that Guillermo Del Toro might have conducted it with far more conceptual ambition than that.

Furthermore, the film throws all manner of interesting and unusual images at us – the unexploded bomb dropped by the Fascists half-buried in the courtyard that is claimed to house souls; and the titular Devil’s Backbone, an alcohol that is soaked in the foetuses of deformed children. Were this a literary work, either image, especially considering that the film is entitled The Devil’s Backbone, would have had enormous symbolic function and would come to echo other parts of the story. Here however they remain merely offbeat images that Guillermo Del Toro fails to ignite or attach any importance to.