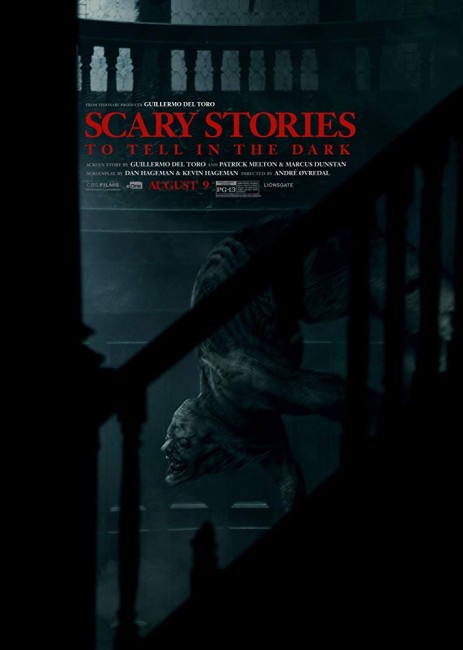 The town of Mill Valley, Pennsylvania, 1968. School friends Sheila Nichols, Auggie Hildebrandt and Chuck Steinberg are out trick-or-treating when their haul is snatched by school bully Tommy Milner. They respond by pelting his car with their arsenal of tricks. Tommy and his gang pursue them. Fleeing, they take refuge at the local drive-in theatre and hide in the car of Ramon Morales who steps up to protect them, Joined by Ramon, the four head to an abandoned house that is rumoured to be haunted by Sarah Bellows after she was locked away by her family. In a room behind a hidden panel, Sheila finds Sarah’s book of stories. Back home, she watches as stories start writing themselves on the blank pages, featuring them, Tommy and others as characters. As this happens, the stories unleash entities that come to kill them.

The directorial chores have been handed over to Norwegian director Andre Øvredal whose The Troll Hunter (2010), a Found Footage film made with a quirkily eccentric sense of humour, became a word of mouth hit. Øvredal had earlier made Future Murder (2000), although hardly anybody appears to have seen this, and followed The Troll Hunter with the horror film The Autopsy of Jane Doe (2016). Subsequent to this, Øvredal went on to make the Norwegian mythological fantasy Mortal (2020).

Scary Stories to Tell in the Dark emerges as an ungainly beast on screen. It feels as though it has been slung together to incorporate a host of competing influences. In recent years, we have had the hits of tv’s Stranger Things (2016- ) and the remake of It (2017), both featuring a group of kids that were on the cusp of adolescence facing a supernatural menace. This seems to have mandated that we get a similar bunch of kids at the centre of the story here.

The other problem the film faces is how to turn a collection of short stories, most of which run to around a hundred words each, into a single narrative. The most obvious way would have been some sort of anthology but for whatever reasons Øvredal, Del Toro et al choose not to do this. However, the single story format the film opts for gives the film the problem of trying to create a dramatic structure to carry the stories. Thus Scary Stories reaches to the recent hit of Goosebumps (2015) for a similar idea. Goosebumps had the denizens from the various R.L. Stine stories being unleashed from their books and a group of kids racing to stop these. This comes up with a similar idea where each of the deaths of the characters is written in a book and then comes to life.

The book come to life idea has been done before. Indeed, Scary Stories could almost be a horror version of The Neverending Story (1984) – or perhaps more so the excruciating The Neverendinng Story III (1994), which had the characters from the book emerge into the real world. There was also the imaginative I, Madman (1989) in which the reading heroine is stalked by a maniac emerged from a book. By contrast, while these others contain a clever and intriguing play of meta-fiction, I don’t think Scary Stories to Tell in the Dark does anything particularly imaginative with its premise – the figures from the stories emerge to kill their victims and that is about it.

Nor for that matter does Andre Øvredal do anything imaginative with the film. The appearances of the various creatures is slight and nothing much happens when they do – Austin Abrams is pursued by a scarecrow, Natalie Ganzhorn develops a giant zit, Gabriel Rush may have cooked a corpse’s toe in a soup, while the climactic scenes involve a lot of running around the house.

The most imaginative of these is the scene where Austin Zaju is pursued by a something called the Pale Lady – a pasty faced ghost figure that looks like an obese version of the ghosts from the Ju-on/The Grudge films. It is not that Scary Stories to Tell in the Dark doesn’t suggest it has potential – the build-up is fine, leading you to expect something much more than the tame and uneventful scares that we do get – but the delivery fades into the same anonymity of every other multiplex horror film out there.