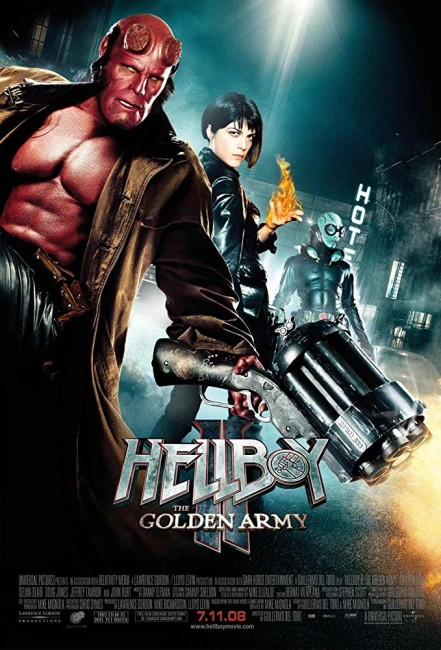 As a child, Hellboy learns the story of how Balor, the king of the elves, had an invincible clockwork golden army built for him. After deciding that the army was too powerful, Balor locked them away deep in the Earth and split the Crown of Bethmora that controls the army into three parts. In the present-day, Balor’s son Prince Nuada desires to reunite the crown and kills his father when he tries to stop him. The Bureau for Paranormal Research and Defense becomes involved when Nuada massacres a Manhattan auction house to retrieve one of the pieces of the crown. Under the new Bureau head Johann Krauss, who exists as ectoplasm inside a suit, they follow the trail down to the Troll Market. There Abe Sapien discovers Nuada’s sister Princess Nuala who is on the run with the remaining piece of the crown. As Abe becomes attracted to Nuala, Nuada bursts into Bureau headquarters after her, fatally wounding Hellboy in the process. The only hope to save Hellboy’s life is a trip to where the Golden Army lies beneath the Giant’s Causeway in Ireland. However, this involves making a deal that will give Nuada the final piece of the crown.

Since the 1990s, Guillermo Del Toro has emerged to become one of the top fantasy filmmakers in the world. Del Toro first appeared with the Mexican-made vampire film Cronos (1993), which gained a good deal of acclaim as an arthouse release. This attracted enough attention to have Del Toro brought to the US to direct Mimic (1997). Del Toro went from success to success, alternating Spanish-language arthouse works like The Devil’s Backbone (2001) and Pan’s Labyrinth (2006) with comic-book fuelled works like Blade II (2002) and Hellboy (2004).

Following the extraordinary acclaim enjoyed by Pan’s Labyrinth, Del Toro became recognized on the wider (ie. non-genre) stage. At the point this film was released, he seemed to have his fingers in every imaginable pie – with reported adaptations of the Marvel comic-book Dr Strange, H.P. Lovecraft’s At the Mountains of Madness, a new version of Pinocchio and Frankenstein, Disney’s Haunted Mansion ride. He sidetracked off onto the non-starting Hobbit movies for Peter Jackson, eventually ending with co-screenwriting credit on the finished trilogy The Hobbit: An Unexpected Journey (2012), The Hobbit: The Desolation of Smaug (2013) and The Hobbit: The Battle of the Five Armies (2014). In between this, he also produced other works (see below). Del Toro finally settled on his next directorial project as being the giant robots film Pacific Rim (2013), followed by the ghost story Crimson Peak (2015) and the amphibian man romance The Shape of Water (2017), which won Del Toro an Academy Award as Best Director.

Hellboy, adapted from the Mike Mignola comic book, was one of Guillermo Del Toro’s least satisfying works, although enjoyed a healthy cult afterlife subsequent to its cinematic release. Del Toro and Mike Mignola also oversaw two animated spinoffs with Hellboy Animated: Sword of Storms (2006) and Hellboy Animated: Blood and Iron (2007). With Hellboy II: The Golden Army here, Del Toro makes a sequel. Del Toro has taken the opportunity of being able to command a much larger budget to expand the original out onto a wondrous scale. Although, rather than further superheroic adventures or more of the same the demonic combat of Hellboy, Del Toro takes The Golden Army in other directions. The Golden Army is less a superhero film than one that slots into the eccentric fantasy worlds peopled by strange creatures that have popped up in recent years – see works like Takashi Miike’s The Great Yokai War (2005), MirrorMask (2005), Luc Besson’s Arthur and the Invisibles (2006) and indeed the labyrinth sequences in Pan’s Labyrinth.

Del Toro takes enormous delight in peopling Hellboy II: The Golden Army with an menagerie of eccentric and offbeat creatures – Mr Wink, a giant troll that has a huge rock-like fist that blasts off his arm on the end of a chain; a horde of malevolent tooth fairies that devour human bones; guards with black beaked heads that look like predatory birds; a shop assistant with a head that has been built like a wooden model cathedral; the arrival at the Giant’s Causeway to be greeted by a creature with a small cart instead of legs and an angel of death that has no face excepting for a shell and eyes around its wings. During the venture down into the Troll Market, the creature effects people go wild in terms of creations. There is also an amazing prologue telling the story of the elves and the forging of the crown, where Guillermo Del Toro has seemingly set out to imitate the Danish puppet fantasy Strings (2004).

The best of the new creations is that of Joachim Krauss, a character taken direct from the comic-book who consists of ectoplasm and lives inside a diving suit with an opaque glass helmet for a head – the scene where he provokes Ron Perlman who ends up punching him and puncturing the helmet is side-splitting.

The big set-piece of the film in terms of creatures and effects is when Nuada unleashes the Elemental in the streets of Manhattan, where the seed grows into a massive plant creature rampaging about the streets. What is so striking about the scene – as say compared to the similar monsters that raged through the area in Godzilla (1998) and Cloverfield (2008) – is how the concern in the sequence is less about putting on a display of mass destruction than it is over Hellboy killing a creature that is the last of its kind.

This time Guillermo Del Toro seems to have much more of an ease with the characters who are delineated with far more roundedness, particularly Selma Blair’s Liz. There is an amusing running B-plot about Hellboy and Liz’s relationship problems. As in Hellboy, The Golden Army is anchored by the wonderfully laconic and laidback performance from Del Toro’s regular contributor Ron Perlman. The most amusing scene in the film is where Hellboy and a lovesick Abe Sapien both get drunk to the accompaniment of Barry Manilow’s Can’t Smile Without You (1978).

More disappointingly, Guillermo Del Toro seems so absorbed with his creatures that he never invests too much in creating the screenplay. This is fairly rudimentary and tends to travel in a straight-line – it is eminently predictable, for instance, from the point that Del Toro introduces the brother and sister who share each other’s injuries that she will save the day by sacrificing herself. In a way, the perfect co-writer for a future Del Toro project would be Neil Gaiman. Gaiman fantasies like Neverwhere (1996) and MirrorMask perfectly mirror the world of strange creatures that Del Toro is trying to create here – indeed you could easily imagine the venture into the world of the Troll Market as being another corner of the secret underworld of Neverwhere.

Guillermo Del Toro and Ron Perlman talked about a third Hellboy film for several years but nothing ever emerged. Hellboy (2019) was a reboot of the series with David Harbour taking on the title role.