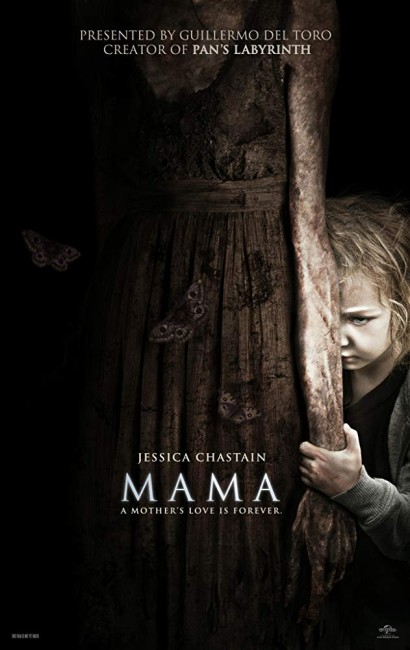 As the Recession hits in Richmond Oregon, businessman Jeffrey LeSange flees with his two young daughters Victoria and Lilly, having killed his business partners. The car skids on the icy road and goes over an embankment. Jeffrey takes refuge at a cottage in the woods but is attacked by something in the dark. Five years later. Jeffrey’s brother Lucas has placed everything he has into searching for their whereabouts. His trackers find the cottage where the two girls are alive in a feral state. They are placed under the care of Dr Gerald Dreyfuss. Lucas and his girlfriend, the rock guitarist Annabel, go to court to sue for custody. Back home, the girls prove strange, insisting that they have an invisible companion called Mama. As something hospitalises Lucas and Annabel is left with sole care of the girls, she and Dreyfuss come to suspect that Mama is a real supernatural presence.

Mama comes executive produced by Guillermo Del Toro, the high-profile director of genre films such as Cronos (1993), Blade II (2002), Hellboy (2004), Pan’s Labyrinth (2006), Pacific Rim (2013) and Crimson Peak (2015). Ever since his name started to rise, Del Toro has become manically hyperactive in terms of the number of projects he is willing to take on, having announced more directorial works than any sane individual could be expected to handle in a single lifetime. He has also been happy to lend his name as an executive producer to other films with the likes of The Orphanage (2007), While She Was Out (2008), Julia’s Eyes (2010), Splice (2010) and Don’t Be Afraid of the Dark (2011), as well as the tv series The Strain (2014-7), which was based on his novel. On the other hand, this has started to become indiscriminately applied with Del Toro also associated with a number of DreamWorks animated films like Megamind (2010), Kung Fu Panda 2 (2011), Puss in Boots (2011) and Rise of the Guardians (2012).

Mama comes from newcomer Spanish director Andres Muschietti, here hiding behind the more Anglicised name of Andy. Muschietti had previously made the film as the three-minute long Mama (2008). This obviously inspired Guillermo Del Toro sufficiently to give backing to Muschietti to expand Mama as a full-length film. The resulting film marked Muschietti’s feature-length directorial debut.

The promise that Mama‘s trailer held rapidly proves to be one that falls apart in the hands of a novice director. (Clearly, Guillermo Del Toro was too preoccupied with his other projects to offer much in the way of guidance). The film never seems to consist of much more than Muschietti offering up peripheral pop-up scares. These rapidly start to become tiresomely cliched, having been overused in a great many other films and only being served up in a repetitive and uninspired way here.

There are times that Andy Muschietti seems on the verge of creating something genuinely eerie but blows it. A perfect example is where the trackers enter the cottage in the woods for the first time and we see filthy, half-human things scuttling through the house and up on the top of benches and refrigerator. The scene looks entirely unearthly but what kills it is the addition of loud, amplified slams on the soundtrack that seem to be there with a bullhorn telling us when to jump and be scared. The best effect that Muschietti gets off is the scene where Isabelle Nelisse is in the bedroom tugging on a blanket and we think she is playing with Megan Charpentier only for Charpentier to come out of another room down the hall and in successive shots we see a shadowy figure outlined against the wall and then Nelisse being lifted up around ceiling height.

In the end, Mama disappointingly reveals its hand as being nothing other than another tired ghost story. The feral children angle and the initial unearthliness of the scantily observed Mama creature holds promise but there increasingly appears to be little raison d’etre to the film. The script is predictable and you can see everything coming from a long way off. Once you get past the premise, where it becomes clear where everything is going and as the script wheels old hat genre devices into play, you cease to become engaged in what happens in the film because it holds no surprises, no unexpected shocks, no characters of any interesting depth, just the ratcheting of creaky old horror movie devices. Moreover, the constant profusion of loudly overstated soundtrack shocks kills all the atmosphere.

Perhaps the most unusual aspect of the film is the casting. The headline name is Jessica Chastain. Mama opened within a week of Chastain’s Academy Award-nominated performance in Zero Dark Thirty (2012) and the two roles could not exist at more opposed poles to one another. If one didn’t know, you would never guess it is Chastain here with her natural red hair hidden under a black dye job and she Gothed out with tattoos. The disappointment of casting an actress of Jessica Chastain’s calibre is that the film does nothing with her. Though she is given black hair dye and a set of tattoos, her Goth character could just as easily be replaced with Zero Dark Thirty‘s Maya – or for that matter The Help (2011)’s Celia – for all the difference it makes.

Up against her is Danish actor Nikolaj Coster-Waldau whose name has risen in recent years as a result of tv’s Game of Thrones (2011-9). Coster-Waldau has an impossibly handsome presence but for some reason the film chooses to write him out of the show about halfway through and allow the lead to be inherited by the far less sympathetic character of Chastain’s step-aunt.

Andy Muschietti subsequently went on to direct the two-part remake of It (2017) and It: Chapter Two (2019).