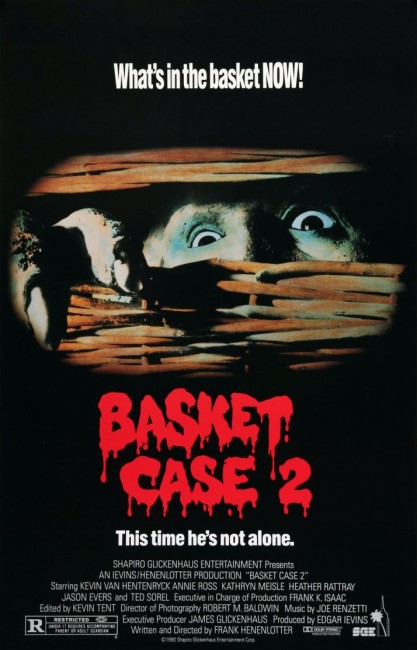 Duane Bradley and his deformed Siamese twin brother Belial escape hospital and are given refuge by Granny Ruth Smoeller who runs a secret haven for freaks on Staten Island. There Belial finds romance with Eve, a bodiless torso. Duane also finds romance with Granny Ruth’s daughter Susan but desires to leave. Their security is threatened by an intrusive tabloid journalist who is determined to obtain a story.

Low-budget director Frank Henenlotter made a unique debut with Basket Case (1982). Along with his even better follow-up feature, Brain Damage (1987), Frank Henenlotter for a time showed promise as a highly original low-budget talent. Alas, Henenlotter then disappeared as a director in the early 1990s, not making another film again until Bad Biology (2008), and now spends his time making documentaries on genre subjects with Herschell Gordon Lewis: The Godfather of Gore (2010) and That’s Sexploitation! (2013) and the non-genre likes of Chasing Banksy (2015) and Boiled Angels: The Trial of Mike Diana (2018).

Here Henenlotter has clearly opted to take the commercial route in making a Basket Case sequel. Certainly, the budget on Basket Case 2 is much more substantial than the price of two used shoestrings that Henenlotter had on the original. However, with someone like Frank Henenlotter at the helm, Basket Case 2 is not merely a repeat of the first film. Henenlotter in fact takes the story into new and original territory to make the film a comic variant on Freaks (1932).

Of course, Frank Henenlotter’s sympathies lie entirely with the freaks – the end credits, for example, insist on listing them as ‘unique individuals’. Henenlotter makes the observation, in a none too subtle way, that they are normal on the inside and the outside world is freakish. The point is hammered home with lines like: “In a House of Freaks you’d be the one out of place.” The female journalist receives a fate directly modelled on the ending of Freaks, whereupon she is told “Gee Marcy, you should see yourself – you’re the freak now.”

While lacking in a great deal of metaphoric finesse, Basket Case 2 is not without imagination. There are very Henenlotter-esque touches such as the sight of Belial undergoing analysis. Particularly notable is the vividly perverse climax, which features a love scene between two bodiless torsos; Kevin van Hentenryck going to consummate his love affair, only to find his love interest has been pregnant for six years with a creature that refuses to leave her womb; and he, as a result, becoming deranged, sewing Belial’s torso back onto himself as the end credits roll on peals of maniacal laughter.

Gabe Bartalos contributes a series of way out makeups – people with half-moon shaped faces, multiple mouths and the like – although, while these may have looked amazing on the design board, they are in practice clearly only facial appliances.

This was followed by a third sequel from Frank Henenlotter with Basket Case 3/Basket Case 3: The Progeny (1991).