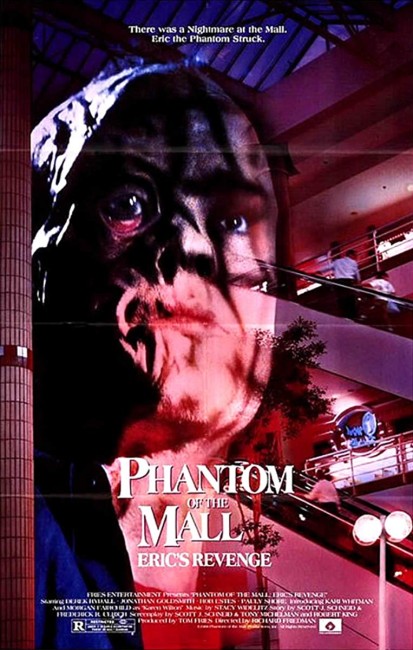 It is the opening of the Midwood Mall. Lurking in the ventilation shafts is a masked Phantom who emerges to kill people. Melody Austin gets a job as a sales assistant in the mall. The Phantom becomes obsessed with Melody, watching her through the security cameras. As she becomes aware of his presence, she realises that this is her former boyfriend Eric Matthews who she believed had been killed in a house fire started by a shady developer. As Eric takes her away to his lair, he plots the concluding movement in his revenge against those who hideously disfigured his face by blowing the mall up.

This leads to some amusing and often clever interpolations as we watch various aspects of the story translated into modern mall culture. Christine Daae goes from being an operatic understudy to a store salesgirl (in order to justify his obsession with her, we get an invented background where she and Eric were boyfriend/girlfriend before he was disfigured). In a nifty touch, The Phantom secretly spies on her by tapping into the mall’s security camera network. The Phantom is decked in more modern guise – a baseball cap and sweatshirt with a university logo, while he uses martial arts to defend himself. The famous unmasking scene comes with him not seated at an organ as Christine creeps up behind but rather amusingly with him pumping iron at a weight machine.

Alas, the casting of twenty year-old Derek Rydall in the title role woefully fails to give us a Phantom that has anything of the tortured soul of his classic counterparts, or for that matter the weepy romanticism of his modern (musical) incarnations. We do get the venture into the Phantom’s lair at the end, although this is somewhat cramped and unspectacular. Rather than the big set piece where he cuts the theatre’s chandelier on the audience below, he attempts to detonate a bomb.

The original story of The Phantom of the Opera never has the Phantom killing many people. Like the 1989 film, Phantom of the Mall: Eric’s Revenge plays out more as a slasher movie. The victims are all objectionable characters to be found around a mall – the security guard spying on the girls’ changing room, one of the staff who is a rapist, the boss’s overly entitled skateboard-riding son. There is some entertainment value to be had in the gorily absurd despatches:- a mall security guard (John Walter Davis) is rammed with a motorised cart, causing his eyeball to pop out, followed by his body being thrown through the ventilation grille to land on his boss (Jonathan Goldsmith)’s desk; a snake sent through the pipes to emerge and bite the rapist (Dante D’Andre) in the crotch as he sits on the toilet; the skateboarding teen Tom Fridley getting a rope around his neck and dragged up an escalator; a severed head left impaled on a hat rack.

Morgan Fairchild is one of the few recognisable names in the film – although the film does feature an appearance from the uber-annoying Pauly Shore back before he was a recognised name (although he doesn’t get killed). Fairchild at least gets an entertaining despatch where she is bodily thrown through a window and into the mall by The Phantom to be impaled on a spike.