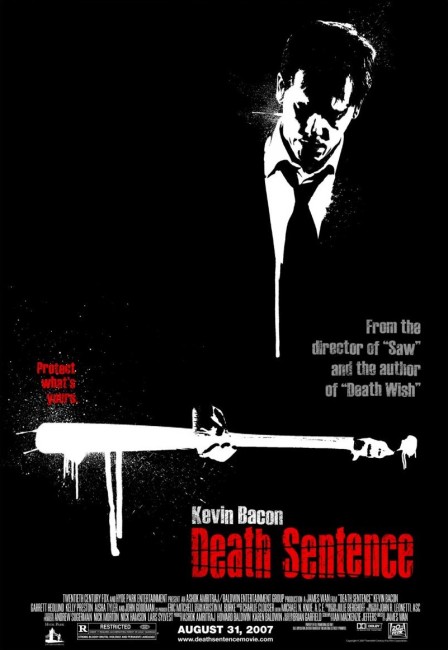 One evening, risk assessment executive Nicholas Hume is returning home from an ice hockey game where he has been watching his teenage son Brendan playing. As they stop at a gas station, Brendan goes inside while Nicholas waits out at the pumps. Two cars of gang members then pull up and conduct a robbery. In the midst of this, Brendan’s throat is slit. Nicholas tackles and unmasks one of the thugs. In a police identity parade, he is able to identify the thug as Joe Darley. When Nicholas then learns that Joe is only going to get three years maximum for the murder of his son, he stands up in court to say that he was mistaken. He then takes a hunting knife, tracks Joe down and stabs him. The rest of the gang, led by Joe’s older brother Billy, realize it was Nicholas and come hunting him. When Nicholas kills another gang member during their pursuit of him, they take the address from his dropped briefcase and promise to come after his family.

Death Sentence was the third film from James Wan. Wan is a young director in his late twenties who made an astonishing debut with the torture and sadism classic Saw (2004). Saw was such a runaway sleeper hit – made on only a $1.2 million budget – that people were queuing up to offer Wan money for his next film. This clearly came about in 2007 – not once but twice. First, Wan appeared with Dead Silence (2007), a variant on the evil ventriloquist’s doll theme. Wan’s second film of 2007 was Death Sentence.

Death Sentence is a variant on the vigilante fantasy. Indeed, 2007 seemed to herald the start of a revival of the vigilante film with The Brave One (2007) and Gran Torino (2008) also on cinema screens, as well as Already Dead (2007) and the British Outlaw (2007), Straightheads/Closure (2007) and Harry Brown (2009). The progenitor of the vigilante film is without any question the Charles Bronson film Death Wish (1974), which has a strong influence on Death Sentence. The connection is even more overt here in that the film here is based on the novel Death Sentence (1975) by Brian Garfield, which was a direct sequel to the original Death Wish (1972) novel, featuring the same hero Paul Benjamin (which was changed to Kersey in the film). Unlike the novel, which follows Benjamin as he has to deal with a copycat vigilante, the film has abandoned the entire plot of the book, even the names of the characters. As far as one is able to ascertain, the only common connection between the book and film is that both are set in Chicago and feature a vigilante. A few years later, Death Wish was given an official remake with the Bruce Willis-starring Death Wish (2018).

The early family scenes are banal, as though James Wan lacked a huge deal of interest in them and was wanting to cut to the (action) chase. The aftermath of Stuart Lafferty’s murder, for example, comes with cliche shots of an emotive songs playing on the soundtrack, which is surely a shortcut to illustrating grief rather than the more complex means of allowing the actors and direction to convey such.

However, from about the point that the gang start fighting back, James Wan puts his grip on the audience in a big way. There is a breathless sequence where the gang pursue Kevin Bacon, all shot with handheld camerawork, a sequence that races through main streets, back alleys, kitchens and finally into a carpark building as they shoot at him, the camera effortlessly snaking up and down between the multiple parking levels as they search, before Bacon fights with one of the gang inside a car as the handbrake is knocked off and the car slides towards the edge of the roof with them in it. The breathless intensity of the sequence leaves one completely exhausted.

Death Sentence is a film that is made to tap directly into the redneck emotions that underlie this vigilante genre. It is a raw, visceral and emotionally ragged ride. At about the point that the gang break into the house after Kevin Bacon – another intensive sequence – the film does the near unthinkable [PLOT SPOILERS] – it kills off hero Kevin Bacon, wife Kelly Preston and remaining son Jordan Garrett. You sit thinking “holy shit, the film’s only just after the one hour point – they can’t kill the hero and everyone in his life off.” There is a strong theme that underlies the film – one that is mirrored by both the hero and the gang coming after him – about the loyalty and bond between families and the unforeseen consequences that drastic actions like revenge killing can have on those nearest and dearest.

Unlike the tepid The Brave One, James Wan is not afraid of delivering the film on the primal level of almost pornographic ultra-violence that is half the appeal of these films. Equally, he sees no need to morally excuse or justify the protagonist’s actions. The climactic scenes are where Wan goes for broke. Here there is the undeniable influence of Taxi Driver (1976) – another classic in the vigilante genre – with scenes of Kevin Bacon buying a collection of guns, shaving his head and then kicking his way into drug houses. The film arrives at an immensely satisfying climax with Kevin Bacon bursting into gang headquarters, blowing away all and sundry where James Wan has enormous fun showing the bottom half off someone’s leg blasted off with a shotgun, numerous fingers being shot off and bullets impacting in heads and necks.

Amid the cast, Kevin Bacon does capably well in the central role. It is nice to see the lovely Kelly Preston back on screen. The almost completely unknown Garrett Hedlund makes a promising appearance as the darkly charismatic gang leader. The most surprising role is the cameo from John Goodman, where Goodman (a fine actor who has been absent from screens the last few years) has a field day, playing with a moral ambiguity that goes considerably against what one expects from him.