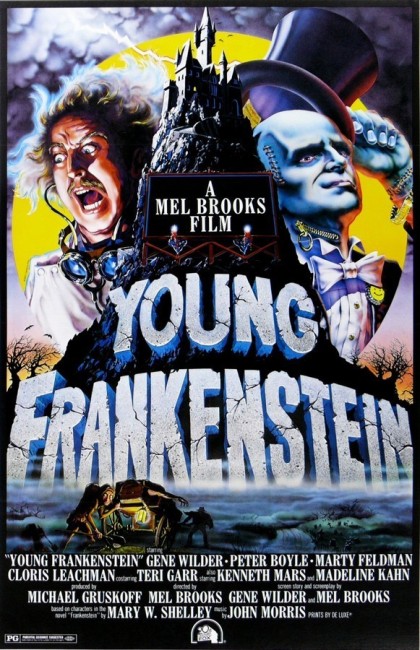 Medical lecturer Frederick Frankenstein goes to great lengths to divorce himself from his family name. He then learns that he has inherited his grandfather’s castle in Transylvania. Travelling there, he finds his grandfather’s laboratory and notebook. Inspired by reading this, he and the hunchback Igor steal the hulking body of a hanged man, implant a brain and set about bringing it to life.

Mel Brooks is a highly erratic talent. There was a time when people used to call Mel Brooks one of the great comedy directors and Young Frankenstein often attracts “one of the funniest comedies of all time” comments. On the other hand, Brooks is a talent who peaked in 1974 – when he made both Young Frankenstein and Blazing Saddles (1974) – and everything he has made since has only fallen in the shadow of these two hits.

All of Mel Brooks’ films are parodies of filmic genres – Blazing Saddles takes on the Western; Silent Movie (1976) is self-explanatory; High Anxiety (1977) eviscerates Hitchcock; The History of the World Part I (1981) the historical spectacle; Spaceballs (1987) George Lucas and the modern sf film; Robin Hood: Men in Tights (1993) the cinematic Robin Hood; and Dracula: Dead and Loving It (1995) the cinematic Dracula. Brooks’ work, particularly from the 1980s onwards, lacks the creative energy his earlier films did and emerges filled with silly sight and scatological gags. Indeed, during this time it can be observed that Brooks’ best films are those where he steps back and merely produces – the likes of David Lynch’s The Elephant Man (1980), Frances (1982) and David Cronenberg’s The Fly (1986).

The plot is essentially a rerun of the third Universal film Son of Frankenstein (1939) wherein Basil Rathbone’s heir returns to reclaim his father’s heritage. Brooks sends up scenes from the originals – Kenneth Mars does a witty parody of Lionel Atwill’s wooden-armed police inspector from Son of Frankenstein; an uncredited Gene Hackman mercilessly skewers O.P. Heggie’s blind hermit from Bride of Frankenstein (1935) – this time setting the monster’s finger on fire when he goes to light a cigar; and there is an amusing take on the scene where the monster encounters the little girl by the river bank in Frankenstein (1931).

Young Frankenstein was a huge success. Its humour struck a chord and was appreciated by a generation who had never seen the Universal originals. Although a more in-depth second viewing shows that outside of the parodies and scene recreations, Mel Brooks’s crasser jokes tend to rise to the fore – Gene Wilder comments “What big knockers” upon regarding the castle door, Teri Garr replies “Why, thank you, doctor.” Some jokes – horses whinnying every time Frau Blucher’s name is mentioned – tend to get overused to the point they are battered into submission. There is a certain vulgarity, nevertheless it is a film filled with inspired moments – the monster and creator get to stage a tuxedo-and-tophat version of Puttin’ on the Ritz and in the end the monster sits up in bed with Elizabeth, reading the Wall Street Journal.

Brooks has also assembled one of the best casts he has ever worked with. All shine at their comic glory. Gene Wilder is an intensely annoying actor – he tends to deliver everything at a wildly histrionic pitch shouted from the top of his lungs. This is probably one of the better roles that Wilder was ever given and he is at his best when delivering a parody of pained sincerity.

There are other fine comic performances from the likes of Marty Feldman, Madeline Kahn and Teri Garr. Best of all is Peter Boyle as the monster. Boyle creates an amazing range of expressions with his eyes alone – it is rather amusing to have a sympathetic monster who represents the only sane reaction amid the madcap goings-on about him. It is a shame that Peter Boyle never ever managed to find a role that he shone in again as he does here.

Following the great success that was enjoyed by the Broadway adaptation of Mel Brooks The Producers (2001), Young Frankenstein was revived as a Broadway musical in 2007, although only met with mixed success.