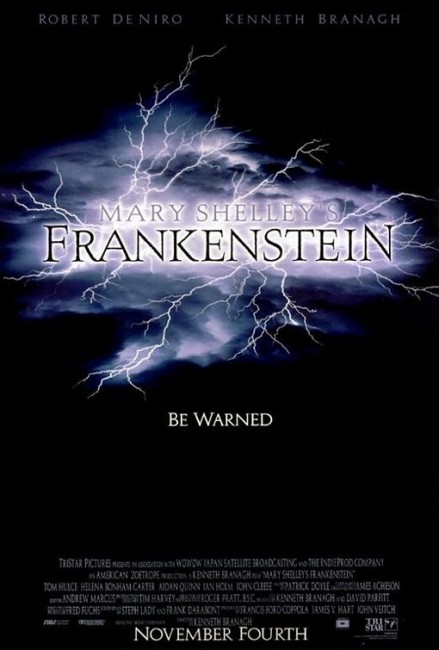 1794. A sailing ship exploring the North Pole is grounded on the icepack. There the crew encounter a madman who introduces himself as Victor Frankenstein and tells the captain an incredible story. The son of a wealthy Geneva doctor, he entered medical school where he became fascinated with the theories of Professor Waldman who claimed to be able to reactivate lifeforce by electrical stimulation of the Chinese acupuncture points. After Waldman’s death, Victor took his notebooks and successfully revived a body from the dead but ran away shocked at what he had done. The creature survived and learned to speak by listening in on a family living in the forest. It then returned to Frankenstein, killing his younger brother and tormenting Victor until he promised to create a mate for it.

In like vein, Mary Shelley’s Frankenstein has been designed as companion piece to Francis Ford Coppola’s visually sensational Bram Stoker’s Dracula (1992). This time Francis Ford Coppola only serves as producer rather than director, while Dracula‘s screenwriter James V. Hart returns as producer. Both versions are the highest-budgeted production of either story and lay some claim to being filmed ‘as the book was written’, evidenced by their somewhat pompous titular claim to authorial validation.

Despite a noble attempt, Mary Shelley’s Frankenstein fails to quite come off. At just over two hours, the film feels overlong. It is wordy and the pace drags in many scenes. Part of the problem is the story’s familiarity. The build-up with Frankenstein’s trip to Vienna, his meeting with Clerval, his defiance of the medical fraternity, his first hesitant experiments have all been done before – we know where they are heading and the film offers no new spins on the familiar.

In the latter half, the film becomes far more interesting. Here we get plot elements from the book that have not been tried in many previous versions – scenes like the Arctic opening and end; simply the fact that the creature talks and is intelligent and able to express its pain; the sequence of events concerning the killing of William and the creature’s framing of Justine; the creature’s compelling Frankenstein to create it a mate to ease its loneliness. This is one of the few adaptations of the book to get the relationship between the creator and creation right – emphasizing the creature’s loneliness, its rejection from society, its haunted quest for a soul, its desire for a mate, and Frankenstein’s craven running away from his creation and ensuingly being forced to take responsibility for it.

Some details have been changed – the events of the latter half of the book have been telescoped down, Clerval is not killed by the creature and Frankenstein does not go all the way to the Orkneys to create the monster’s mate. The biggest change occurs in the latter third where Frankenstein, unlike in the book, does end up creating a female creature. Here the film imports some of Bride of Frankenstein (1935) and in an intriguing move has Frankenstein reviving a murdered Elizabeth from the dead.

There are other subtler changes – at times the film seems to be trying to be a New Age Frankenstein with Frankenstein using acupuncture points to bring dead bodies back to life and arguing that traditional medicine should be balanced out against alchemists like Albert Magnus and Paracelsus. (Although some modern medicine does sneak in – Frankenstein is seen attempt CPR on the dead Waldman well before the technique was actually invented).

The film’s trailer edited glimpses of the film into a fabulously sensual, superbly scored Gothic montage. Sadly, director Kenneth Branagh’s actual visual style is unexciting. The creation scene, which takes place in a brass pressure cooker-come-bath, is lacking in any of the fabulous excitement of the laboratory sequences in either the Universal or Hammer Frankenstein’s. There are some interesting sets – like the medical lecture hall built round an improbably tight concentric spiral pit. The most striking set is the giant staircase inside the Frankenstein house, which sweeps starkly up around two walls – it suggests the stylized sets of the James Whale Frankenstein. There is one beautiful shot where Frankenstein carries Elizabeth’s dead body up the staircase, the long red train of her dress trailing behind her, otherwise Kenneth Branagh uses the set as though it were just part of the background and spends all his time absorbed in fidgety camera swoops in the foreground. Branagh did a sterling job on the Shakespeare adaptations that brought him to attention as a director – Henry V (1989), Much Ado About Nothing (1993) and Hamlet (1996) – however as Frankenstein demonstrates, he is all epic dynamism, but where the story seems hollow, his work seems stretched too large for the stage that contains it.

The influence of the Coppola Dracula does at times seem to be trying to force the Frankenstein story into being something it isn’t. Kenneth Branagh tries to conduct the film with the ostentatious, visually ravishing sensuality that fired Coppola’s Dracula up. Unfortunately, Frankenstein is not a story that readily lends itself to sensual undertows – it is after all about human bodies being cut up and a creature so scarred and hideous that he is repulsive to society – not ready material for erotic cinematography. Branagh naturally gets to bring the creature to life while bared to the waist and covered in sweat. The most bizarre scene is one that goes on for several minutes with a semi-stripped Branagh and a nude Robert De Niro struggling around on the floor in a mass of KY jelly, a scene that seems to be inserted for no purpose other than to allow the audience to contemplate the homoerotic possibilities it may offer – two naked men and a lot of KY jelly, what else is an audience supposed to interpret it as?

As an actor, Kenneth Branagh began life with the Royal Shakespeare Company. Branagh works best when he gives his himself larger-than-life roles such as the sort that his Shakespearean adaptations naturally lend themself to. In straight acting roles, Branagh is not as capable of a finer range of inner emotions, he always seems fired up with theatrical passion. Here he gives the role of Frankenstein a suitable intensity but little more than that.

One had horrifying thoughts when one heard of the casting of Robert De Niro as the creature – that the monster would wander through the film taunting its creator with De Niro’s characteristic lopsided smirk and twinkle of eyes. Thankfully, that is not the case, although some of De Niro’s scenes do seem to be painfully method acted. His scenes with Richard Briers’ blind hermit learning the word ‘friend’ do evince an authentic pain. The casting of comedy actor John Cleese in a Frankenstein film seemed a bizarre choice but Cleese – almost unrecognizable in long white hair and beard – subsumes his funny man persona to create an effective Waldman.