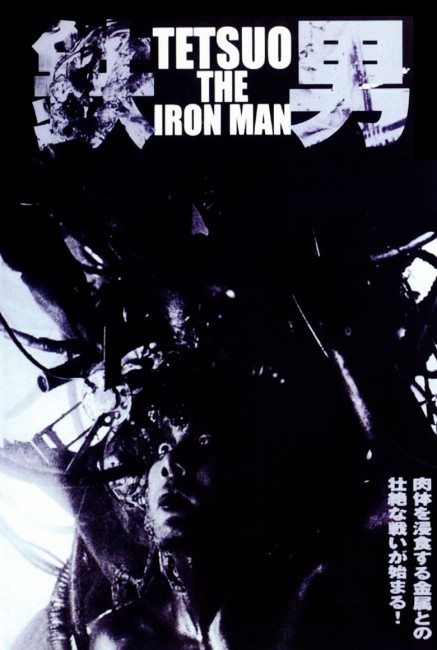 A fetishist who inserts pieces, even entire bars, of metal into his body is run down in the street by a young office worker. After touching a lump of metal in the subway, a woman goes insane and transforms into a bio-mechanical demon and pursues and later anally rapes the office worker with a giant pipe emerging from her crotch. The office worker starts to transform into a bio-mechanoid. He tears his girlfriend apart when his penis transforms into a high-speed drill bit during sex. As the salaryman becomes more and more machine, the fetishist returns to exact revenge.

This minusculely budgeted Japanese film is one of the most extraordinary pieces of underground filmmaking to have emerged in the 1980s. Precisely what Tetsuo – The Iron Man is is difficult to pigeonhole – it is neither wholly science-fiction, neither wholly horror, nor outright surrealism but somewhere between all three. If one is searching for some way to describe Tetsuo – The Iron Man, it might if anything be likened to an Eraserhead (1977) after David Lynch had gone away and done a crash reading of William Gibson. Cyberpunk on hallucinogens maybe.

From the first few minutes in, Tetsuo – The Iron Man hits you with a raw, full-on ferocity. The film’s poor production values, grainy soundtrack and crude handheld camerawork is immediately transformed in a stomach-churning scene where director Shinya Tsukamoto himself, playing the fetishist, cuts open his leg and inserts a threaded iron bar. The rest of the film makes no sense whatsoever on a narrative level, but exists as a series of surreal images of genuinely outlandish intensity.

In one scene set in a subway, a mousy bespectacled secretary touches a strange pulsating lump of machinery and is transformed into a crazed woman with a writhing mechanical hand who pursues the hero through the subway toilets. The subsequent scene defies belief – the beleaguered salaryman returns home only to have the woman from the subway, now transformed into a gleeful, jelled and punked-out demon figure, burst into his garage, developing a massive metre-plus long phallic pipe, which she lasciviously licks then anally violates him with.

The climactic scenes between the salaryman and the fetishist is an amazing progression of imagery – the fetishist walking through the streets warping everything metal in his path and attracting to himself all objects not nailed down; he mutating a cat and incarnating himself out of the salaryman’s dead girlfriend’s body; and the culminating battle with the two of them rushing through the streets on rocket-propelled heels in stop-frame action, battling with writhing coils of wires and hands that drop away to become flame-throwers; and their mutual metamorphosis into larger and larger piles of scrap metal eventually absorbing each into the other’s mass.

The final image is their fusion into a giant scrap metal mountain with the downbeaten salaryman at the bottom and the fetishist atop waving a gun as he sets out to turn the whole world into metal. This is genuine guerrilla filmmaking, an assault on convention and sensibility – even the musical score is deliberately an underground one. A masterpiece.

The underlying theme of much of Shinya Tsukamoto’s work is similar to that in the films of David Cronenberg – flesh has become a mutable battleground where the age-old Manichean debate has finally found its warring ground. In Tetsuo – The Iron Man, flesh represents the downbeaten self, which is engaged in a war with machinery. Tsukamoto sexually fetishizes machinery – pistons, oil, the gleam of chromium, jagged edges, tangled wires – and equates it with wildly repressed desires – it is constantly trying to burst from inside human skin, run rampant and absorb everything into its mass. What more potent an image can such a regimented society as Japan have produced than that of a white-collar worker engaged in a battle of wills to stop his flesh being taken over by machinery that insists on erupting from within?

Since Tetsuo – The Iron Man, director Shinya Tsukamoto has gone onto direct a number of other films, none of which have had the raw impact of Tetsuo. Tsukamoto made two better budgeted but lesser sequels Tetsuo II: Body Hammer (1992) and Tetsuo: The Bullet Man (2009). Tsukamoto’s other films are:- the demon-hunting film Hiruko the Goblin (1990); Tokyo Fist (1995), a film about boxing that repeats Tsukamoto’s unique flesh and machinery fetishism; Bullet Ballet (1998), which plays the flesh and machinery fetishism out on a more literalistic level where a man becomes obsessed with obtaining a gun; the twin drama Gemini (1999) where a doctor’s upstanding life is invaded by a malevolent doppelganger; A Snake of June (2002) where a woman gains erotic liberation from a blackmailer; Vital (2004) wherein an amnesiac man begins to re-examine his life; Haze (2005) about a man trapped in an allegorical maze; Nightmare Detective (2006) and Nightmare Detective 2 (2008) about a man who can enter into dreams; and Kotoko (2011) about a woman suffering hallucinations.