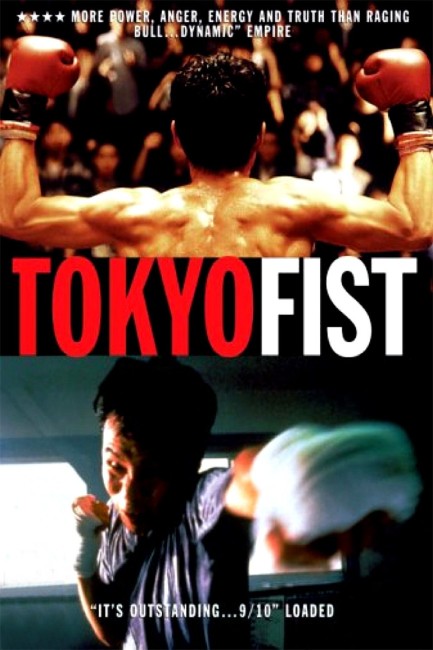 The salaryman Tsuda encounters an old school friend Kojima who has now become a professional boxer. Immediately after this, Kojima makes advances on Tsuda’s girlfriend Hizuru. She decides that she despises Tsuda and moves in with the brutish Kojima. She also becomes obsessed with body piercing and starts inserting larger and larger pieces of metal into her skin. At the same time, the scrawny Tsuda starts obsessively training as a boxer with the intent of becoming a killer and decimating Kojima.

Shinya Tsukamoto is one of the more interestingly original and frequently outré voices in contemporary Japanese cinema. Tsukamoto emerged (or should one say erupted) onto festival audiences with the extraordinary Tetsuo – The Iron Man (1989), a flabbergasting experience that hits you with a psychotically deranged blast of organic-mechanical imagery and sexual fetishism. Since then, Tsukamoto has maintained an eccentric body of cinematic work. Throughout his films runs the constant obsession with the repression of individual identity and its emergence through surreal and fetishistic means. Tsukamoto’s other films include the demon-hunting film Hiruko the Goblin (1990); Tetsuo II: Body Hammer (1992); Bullet Ballet (1998) where a man develops a fetishistic obsession with obtaining a gun; the twin drama Gemini (1999) where an upstanding doctor’s life is invaded by a malevolent doppelganger; A Snake of June (2002) where a woman gains erotic liberation via a blackmailer; Vital (2004) wherein an amnesiac man begins to re-examine his life; Haze (2005) about a man trapped in an allegorical maze; Nightmare Detective (2006) and Nightmare Detective 2 (2008) about a man who can enter dreams; Tetsuo: The Bullet Man (2009); and Kotoko (2011) about a woman suffering hallucinations.

Shinya Tsukamoto’s films are about the eruptions of the repressed exploding out from beneath the veneer of normalcy. The recurring theme in Tsukamoto’s films is about milquetoast salaryman becoming swallowed up (on a surreal/allegorical level) and their identity consumed by uncontrollable forces. In the opening scene of Tokyo Fist, Tsukamoto’s hero (which he also plays himself) is seen visually overwhelmed and drowned out by patterns of identical apartment blocks. A few moments later, we get a montage sequence of his indifferent responses to clients that shows us how numbed his life is. After the break-up with Kahori Fujii, Tsukamoto gives us an assortment of scenes of his hero standing blankly on escalators, trains, in the middle of the street, under bridges, by factories and on apartment balconies. The ordinary character numbed and blank, unable to voice his anguish and surrounded by a cold and empty city is the quintessential Shinya Tsukamoto protagonist.

In contrast to the dulled life of the film’s protagonist, boxing is seen as something that is vital and alive. (Fairly much the same analogies can be found in Fight Club (1999), which prescribes secret clubs where men can pummel each other’s heads to a pulp as remedy to a mindless consumer society where men have lost touch with something real). Much of Tokyo Fist is directed with an insanely frenzied feverishness. The film comes in crazed bursts of energy and explosions of physicality. Tsukamoto opens the film on a frenetically surreal montage of images – fifteen or more people in a boxing ring together fighting, heads being brutally pounded, a man covered in sweat frenetically punching while illuminated against a stroboscopic backlight. The sweaty muscularity of the boxing arena is eroticised – tours through the boxing clubs early on feature mysterious figures with shaven heads and bronzed physiques standing like frozen statues.

In many ways, Tokyo Fist is like a remake of Martin Scorsese’s Raging Bull (1980) as directed by David Cronenberg circa the period of Dead Ringers (1988), Crash (1996) and Spider (2002) where Cronenberg became obsessed with inner mental states – and made into a gore film. Tsukamoto loves the gore – where Martin Scorsese focused on Robert De Niro’s face being pounded and pummelled until it was swollen and blood was gushing, Tsukamoto blows this up to an absurd extreme and covers the screen in jets of arterial spray and shows his protagonists with their faces battered to bloody pulps and swollen up beyond all recognition. Not to mention the fact that he includes some uncomfortably unfaked looking scenes of Kahori Fujii inserting pieces of metal into her flesh.

In many respects, Tokyo Fist could be a J.G. Ballard film. There are a number of similarities between Tokyo Fist and J.G. Ballard works like Crash (1973), which inspired the aforementioned Cronenberg film, Concrete Island (1974) and High Rise (1975). Both Ballard and Tsukamoto feature protagonists that are attempting to work out issues of the psyche by blending with something non-animate – car crashes in Crash, rediscovering life on a traffic island in Concrete Island and by psychologically immersing oneself in being pummelled in a boxing ring in Tokyo Fist.

Like the protagonists in J.G. Ballard works (particularly some of his more surreal works), the characters in Tokyo Fist do not appear to come with logical or even visible motivations. Here they seem like naked screams of anguish because they lack any voice to be able vocalize what they feel, only the means to express themselves in primal howls or by punching things in a ring. To this extent, Kohji Tsukamoto as the antagonist Kojima gives a madcap performance, all physical glee like a deranged leprechaun or maybe a goblin figure from Japanese horror.

Tokyo Fist is not an easy film to get a handhold on. It feels less like a film than 90 minutes of screaming psychodrama. In very little of that time are we ever invited to participate in what is going on inside the character’s heads. The characters are opaque to us – we do not know why Kahori Fujii leaves Tsukamoto’s salaryman, why she becomes obsessed with body piercing and gets a tattoo and then equally abruptly has it removed again. In one scene, Kahori Fujii meets her ex Shinya Tsukamoto under a bridge whilst he is in the midst of his anguish – he silently kneels and begins beating his head against the concrete pillar on the side of the bridge, she stops him doing so and then starts pummelling him herself until his face is a completely bloody pulp. We are never given the slightest clue as to why this exchange occurs. Nor do we understand the ending that Tokyo Fist arrives at – the film leads up to expecting a showdown between Shinya Tsukamoto’s salaryman and Kohji Tsukamoto who stole his girlfriend away, but instead the film ends anticlimactically with Kohji Tsukamoto triumphant in the ring against another opponent.