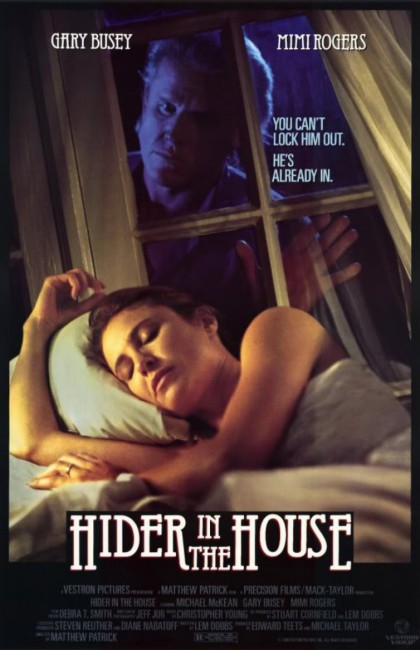 Tom Sykes is released from psychiatric confinement, having been placed there since he was a child for burning his family alive in their house. He tells his psychiatrist that he wants his own home. He comes across a new home being constructed and sneaks in and builds a walled-off hidey-hole in the attic. Not long after, husband and wife Phil and Julie Dreyer and their two children move into the home. Tom watches and listens in on them from his hiding place. He comes to regard them as his own family and even sneaks out to save the young daughter Holly from near drowning. When he overhears that Phil is having an affair, he leaves messages to send Julie to the hotel room and walk in on them. Upset, she kicks Phil out. Tom then saves the son Neill from a school bully and uses this as an opportunity to befriend Julie. He starts trying to move in on her while getting rid of those who threaten the family that he now sees as his.

Hider in the House did do the cinematic rounds when it came out but most people’s exposure to it was more likely as a video release, which is probably a far more suited destination for it. The one thing that screenwriter Lem Dobbs does is create a very original psycho film – the idea of the psycho who is obsessed with having an ideal family, not unlike the title character in The Stepfather (1987). Not only that – in an idea borrowed from the tv movie Bad Ronald (1974) – he also creates a cubbyhole in their house from which he secretly watches on and engages in their lives before he tries to manipulate and inveigle his way to become the man of the household. It is a fascinating idea, although unfortunately one that fails to get a terribly interesting treatment in the way it transpires on screen.

The film offers a surprisingly sympathetic psycho. Even the point-of-view the script takes is with him rather than the family – the film starts with him moving into the house and we follow him as he secretly spies on the family. You might compare this to another film like The Pact (2012) or Housebound (2014) where the fact that someone had been living inside the walls all along was the climactic revelation that a horror show had built up to. We get a very sympathetic portrait of the character – rushing out to save the youngest from a potential drowning and later teaching Kurt Christopher Kinder to stand up to bullies.

Of course, the role of the psycho is cast with Gary Busey, one of the genuine train wrecks of Hollywood. In the years ahead, Busey would make a regular career out of villainous and supporting heavy roles. Here he is still a relative unknown and the innocence of his performance comes undeniably overshadowed by the two decades of subsequent film work that Busey has become known for. the part doesn’t need any psycho theatrics, just the idea of Gary Busey trying to appear ordinary and being friendly to kids seem loaded with enough disturbing possibilities to create a frisson.

The main problem with Hider in the House is that director Matthew Patrick gives the film a very middle of the road handling. There is nothing in terms of suspense that keeps you on the edge of the seat. Things are well signposted – when Gary Busey takes the small bowl that Mimi Rogers made and spends an inordinately long time fondling it, you can guarantee that that will be the item she will discover in his lair and suddenly click as to what is going on; there is the predictable scene where Gary Busey befriends Kurt Christopher Kinder and gives him the moves to stand up to his bullies; Elizabeth Ruscio’s best friend has Victim stamped on her forehead from about the moment she is introduced. About the only aspect that does not fall to expectation is that creepy neighbour Bruce Glover is not killed and even aids the family at the end.

Indeed, what you suspect would have made Hider in the House work far better is if it hadn’t been made with the reasonable budget and name actors it has and instead been made as a much trashier, no-budget psycho film with no name actors and let itself go with all stops out rather than the perpetual restraint of Matthew Patrick’s handling. Instead, what we get is a safe and easy thriller. It is clearly also one made just after Fatal Attraction (1987) and undeniably influenced by that’s film’s huge success. It has the same conservative, family-oriented agenda – an end where the force of psychopathology is eliminated and the family status quo is restored, including the forgiveness of the husband’s sins in straying from his wife’s arms.