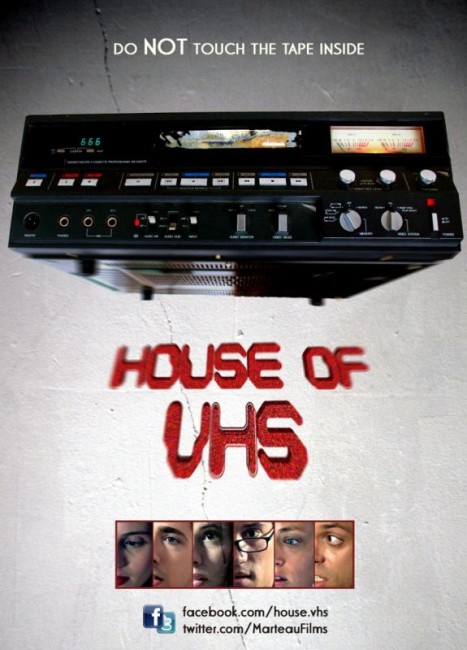 aka Ghosts In the Machine

After meeting at a hostel in Paris, six people, all from different countries, go on a road trip to an abandoned chateau in the French countryside. After settling in, the Australian Guy finds a bunch of old VHS tapes. Raving to the others about the pleasure of VHS, they sit down for a marathon of bad movie watching. When they wake in the morning, they discover that tapes left in the machine have blurred together into a weird mash-up of genres. After using a camcorder, they then discover that members of the group can be trapped inside the machine.

House of VHS was a directorial debut for French director Gautier Cazenave.

I must admit I was hooked by the way the film was described – a group of twentysomethings in a chateau play around with an old vhs recorder and find it causes films to blur together in a mash-up of genres before they are dragged inside the machine. This could have been an ingenious and witty mash-up/parody of various different film genres – I expected something like Waxwork II: Lost in Time (1992).

Alas, the film is far from the delivery of such an idea – most of the filmic mash-ups seem like no more than a series of clips from old movies that are in public domain. Included are the likes of The Phantom Planet (1961), The Brain That Wouldn’t Die (1962), Carnival of Souls (1962), Jesse James Meets Frankenstein’s Daughter (1966), Voyage to the Planet of Prehistoric Women (1968), Invasion of the Bee Girls (1973) and Scream Bloody Murder (1973), among others.

It is also a film in which not much happens. More than half of the show is taken up by the group fooling around and fighting amongst themselves before we even get to the horror element. The film does little with its premise. I did like the passionate speech Ewan Blumenstein gives in the middle of the film about the endurance of VHS as a medium over any of the competitors.

However, we are never given an adequate explanation for why the genre mash-ups are going on – tapes are put into the machine (which is notedly only a single slot player) and for some reason they later mash-up together, no real explanation of how this is happening. The actors spend a good quarter of the film just sitting watching these mash-ups of clips, which seem designed to highlight all the bad movie aspects – you feel like you are in the midst of an episode of Mystery Science Theater 3000 (1988-99, 2017-8), albeit without the smartass quips. There is a point where it feels like the videoclips are in danger of taking over the film.

The horror element only kicks in in the last quarter of the show and in an unsatisfying way. Some of the teens find a camcorder, filming Petur Sigurosson (the Swedish actor who is listed as The American Guy but has an American accent nobody from the US would ever recognise) and then hook the recorder up to the set and replay the tape whereupon Sigurosson vanishes and reappears inside the set. There is the fine moment where they try to get him back and stop the tape – only for him to vanish. Thereafter though the film falls into confusion. It is hard to tell what is going on in the flashback scenes that somehow lead to all of the others being devoured by the vhs player and a confusing end.