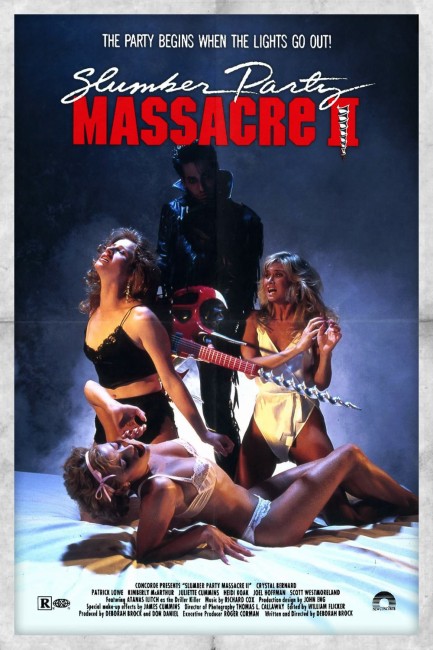 Courtney Bates is the now teenaged kid who witnessed the Slumber Party Massacre. She is troubled by dreams of a power drill wielding maniac. She and the girl band she plays in go away for the weekend to rehearse. Courtney invites Matt, the guy she is interested in along, while two other guys also turn up. While they are partying, Courtney’s nightmares increase to the point where she is having difficulty distinguishing reality. The maniac, wielding a combination electric guitar and power drill, then emerges from her dreams and begins attacking everybody.

The Slumber Party Massacre (1982) was another entry in the 1980s slasher movie cycle. It was regarded in a number of quarters (in my opinion wrongly so) as a feminist response to the slasher film due to the fact that it was a directed by a woman and written by another woman who was a political activist. It appears to have been a modest enough success that Concorde (the production company of Roger Corman at the time) spun off three sequels, beginning with this and followed by Slumber Party Massacre III (1990), as well as the later Slumber Party Massacre IV/Cheerleader Massacre (2003) and a remake of the original with Slumber Party Massacre (2021). In following with the quasi-feminist associations of the original, all three sequels are also directed by women. In this case, it was Deborah Brock who subsequently went onto direct Andy Colby’s Incredible Adventure (1988) and another sequel Rock’n’Roll High School Forever (1991) for Corman, although has since disappeared.

The Slumber Party Massacre was a routine slasher entry in all ways; by contrast, this sequel frequently enters into the realm of the absurd. The closest comparison might be to the ridiculous laughfest that was Silent Night, Deadly Night 2 (1987) in comparison to its predecessor Silent Night, Deadly Night (1984). For one, there is next to no connection to the first film beyond Crystal Bernard supposedly being the sister of one of the girls who was in the original. Some scenes from the original are seen in flashback to justify the connection. Moreover though, both are very different types of films – more on that in a moment.

The biggest problem with Slumber Party Massacre II is that it seems to take forever to get about the business of being a slasher film. Nothing at all seems to happen in the first half-hour, which is padded with scenes of Crystal Bernard having fantasies of Patrick Lowe running in slow-motion and without a shirt on, haunted by dreams and jumping at red herrings thinking she is seeing the power drill wielding killer and dead bodies everywhere. Even when it gets the girls isolated at the house, there is no clear manifestation of any threat, just scenes of the girls partying and Crystal Bernard’s hallucinations.

These hallucinations become entertaining in their increasing absurdity – in one scene, they are all sitting by the pool and Deborah Brock borrows the jump taken from the then-recent The Hitcher (1986) in which a French Fry turns out to be a severed finger but ups it by a factor of five to ludicrously have Crystal Bernard find that there is an entire human hand inside her burger. Although the two most ridiculous jumps are a scene where Crystal Bernard opens the refrigerator and is attacked by a frozen chicken and secondly where the side of Heidi Kozak’s face swells up in a zit the size of a football and splatters Crystal in yellow goo.

Eventually, only in the last twenty minutes of the film, the killer emerges and starts slaughtering the rest of the group. This makes Slumber Party Massacre II feel like a slasher film that takes an awfully long time to get to the business of delivering the expected goods. Possibly the most absurd aspect of an already ludicrous film is the unnamed killer himself. Exactly where the killer comes from is a complete mystery. He appears as a figure in Crystal Bernard’s dreams for most of the film and then at the end suddenly emerges out of these and begins attacking everybody. One suspects that what the film was trying to do was copy the idea of the dream killer from A Nightmare on Elm Street (1984) and sequels. This is something that makes Slumber Party Massacre II into a wildly different type of film than the entirely mundane slasher film the original was.

What is ridiculous about Alanas Hitch’s already over-the-top performance as the killer is how he is outfitted as a 1950s rock’n’roller wielding the absurd novelty of an electric guitar with a power drill on the end of the guitar’s headstock. The film reaches a nonsensical end where Crystal Bernard kills the Driller Killer, emergency services come but as Heidi Kozak is taken away she starts laughing just like the killer, then Crystal Bernard wakes up in bed and we realise it was all a dream before her boyfriend turns over but is revealed to be the killer, before this too is revealed as a hallucination being had by her in a rubber room just as a power drill starts coming up through the floor.

All of the characters get their surnames in homage to contemporary horror – a Courtney Bates, a Sally Burns after Marilyn Burns who played Sally Hardesty in The Texas Chain Saw Massacre (1974) and an Officer Voorhees and Officer Krueger after the killers in respectively the Friday the 13th and A Nightmare on Elm Street series. The killer is only listed on the credits as The Driller Killer presumably in homage to Abel Ferrara’s The Driller Killer (1979).