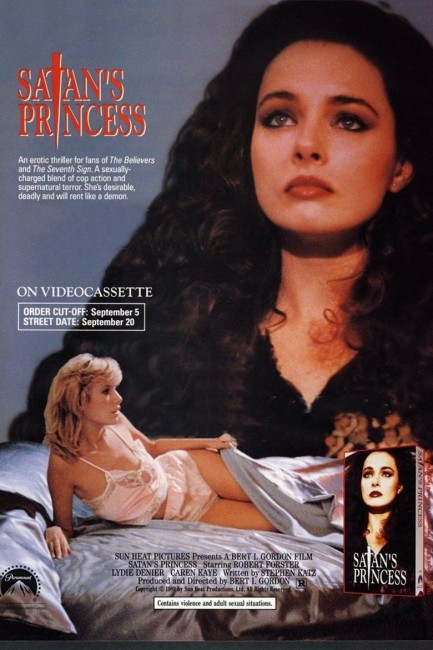 Retired police detective Lou Cherney is pressed by a man to search for his missing daughter. Lou finds that the missing girl has been taken as the lesbian lover of Canadian modelling agency head Nicole St James. As he starts investigating Nicole, Lou learns that she is involved with black magic. People who provide Lou with information turn up dead and then Nicole marshals occult forces in an effort to kill him.

Director/producer Bert I. Gordon was at his height during the 1950s making cheap ripoffs of the giant bug cycle with films like King Dinosaur (1955), The Cyclops (1957), The Amazing Colossal Man (1957), Beginning of the End (1957), Attack of the Puppet People (1958), Earth vs the Spider (1958) and so on. Bert I. Gordon has been around since then but his output after the 1970s has been erratic. Most of Gordon’s films since the 1970s have been cheap occult films – Necromancy (1972), The Coming/Burned at the Stake (1981) and this – although there has been the occasional throwback to his alma mater of the cheesy B-budget science-fiction film with the likes of The Food of the Gods (1976) and Empire of the Ants (1977), as well as a couple of sex films. Malediction/Satan’s Princess was Bert I. Gordon’s last film until Secrets of a Psychopath (2015) twenty-five years later, made at the age of 93.

Malediction is another of Bert I. Gordon’s occult thrillers. Although at times, Malediction seems more of a crime thriller than the horror film it has been sold as – the basic premise and plot structure has a surprising number of similarities to the Canadian occult film The Pyx (1973). The dialogue certainly seems to have been copied directly from the snub-nosed writing of a 1950s crime thriller. For about three-quarters of its running time and with very little rewriting, the film could pass as a crime thriller about a detective investigating the disappearance of a missing girl – there is no indication given during this time that the occult she is mixed up in is real.

In the last quarter, the supernatural elements enter and Malediction becomes the promised horror film – and is about the same time that the film takes a major dive into complete absurdity. The ending is utterly laughable. The scenes where Lydie Denier is revealed as a demon whereupon Robert Forster promptly takes her on with a blowtorch are laughable. However, this is not as hysterical as the denouement wherein the demon decides to make its getaway in Robert Forster’s car – the sheer banality of a demon making its getaway in something as ordinary as a car is beyond description. Having somehow aniticpated that the demon will take his car over one of its own, Forster has conveniently managed to wire the car with high explosives and destroys the demon by detonating them.

Robert Forster, clearly in a career lull before his comeback with Jackie Brown (1997), does a decent job playing a hard-nosed, rule-bending cop, but Lydie Denier gives an appalling performance that comes through a thick French accent.