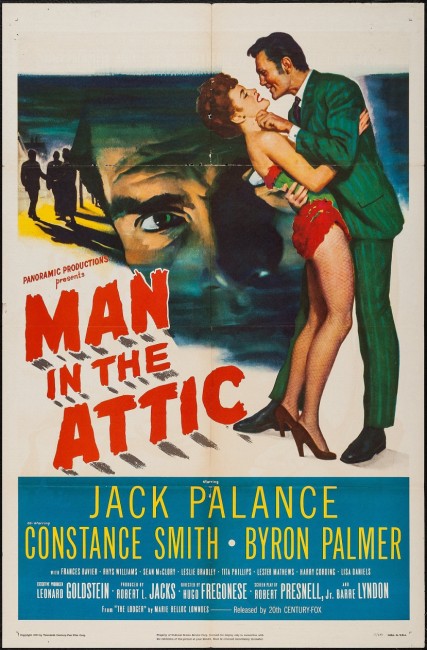 London in the midst of the Jack the Ripper murders. Mr Slade comes to rent rooms from William and Helen Harley. Slade is a pathologist and is engaged in mysterious experiments in the middle of the night. Increasing evidence makes the Harleys suspect that Slade might be the Ripper. The Ripper targets young dancehall girls and they become concerned when Slade becomes friendly with their niece Lilly, a dancer.

Man in the Attic was the third film adaptation of Marie Belloc Lowndes’ novel The Lodger (1912). The first film adaptation was Alfred Hitchcock’s silent The Lodger: A Story of the London Fog (1927). This was remade as The Lodger (1932), a sound version of the Hitchcock film, and The Lodger (1944), featuring Laird Cregar as the sinister title figure. Man in the Attic is a direct remake of the 1944 Lodger – it retains the identifying of the killer as Jack the Ripper, whereas both Marie Belloc Lowndes and Hitchcock simply named the character The Avenger. This version is also co-written by Barré Lyndon, who wrote the 1944 Lodger. There was a further modernized remake with The Lodger (2009) starring Alfred Molina and with Simon Baker as the lodger.

Barré Lyndon certainly takes the opportunity to refine and polish his script. The Slade character is given more believable psychological motivation – he now hates showgirls because he sees his mother, who was a showgirl, as having dragged his father down, rather than the improbable motivation of hating them because one ruined his brother that we had in the 1944 version. The relationship with Lilly/Kitty has been refined – now she is romantically interested in Slade and not in the inspector, which sets up more sympathetic resonances. Although, as in The Lodger, Barré Lyndon has failed to do his research regarding the Jack the Ripper case and still maintains the fiction that the victims were dancers, not prostitutes.

The part of Mr Slade is played by a young (34 year-old) Jack Palance who is almost unrecognisable in one of his first screen roles. Palance is free of the breathy, asthmatic overacting of the performances he gave in later life and with gaunt, bony face he has effectively harsh and sinister presence in the film. This version is better budgeted than the 1944 version and directed with a basic, although not standout, competence. However, it also lacks the entertainingly overwrought melodramaticism of the 1944 version and as such is no more than an ordinary psycho-thriller.

The other Jack the Ripper films include:- those that conduct supposedly straight tellings of the details of the case such as Jack the Ripper (1959), the Spanish Jack the Ripper of London (1971) with Paul Naschy, Jess Franco’s Jack the Ripper (1976) with Klaus Kinski, Jack the Ripper (tv mini-series, 1988) starring Michael Caine, The Ripper (1997), the Alan Moore graphic novel adaptation From Hell (2001) with Johnny Depp, the German Jack the Ripper (2016) and Ripper Untold (2021). There are a number of other works that feature The Ripper as a central character like Room to Let (1950), although most of these vary widely from the known details. More prevalent have been speculative treatments, including the likes of:- having the contemporary but fictional figure of Sherlock Holmes solve the mystery in A Study in Terror (1965) and Murder By Decree (1979); the Ripper being an alien spirit that possesses Scotty in Star Trek‘s Wolf in the Fold (1966) and with similar stories occurring in episodes of Kolchak: The Night Stalker (1974-5) and The Outer Limits (1995-2002); the Ripper being Dr Jekyll in both Dr Jekyll and Sister Hyde (1971) and Edge of Sanity (1989); Jack the Ripper’s daughter featuring in Hands of the Ripper (1971); H.G. Wells and the Ripper travelling through time to the present day in Time After Time (1979) and its tv series remake Time After Time (2017), as well as a time-travelling Ripper appearing in episodes of tv series like Fantasy Island (1977-84), Goodnight Sweetheart (1993-9) and Timecop (1997-8); The Ripper having travelled out West in the Knife in the Darkness (1968) episode of the Western tv series Cimarron Strip (1967-8) and the film From Hell to the Wild West (2017);The Ripper being resurrected or copycated in the present day in The Ripper (1985), Bridge Across Time/Terror at London Bridge (1985), Jack’s Back (1988), Ripper: Letter from Hell (2001), Bad Karma (2002), The Legend of Bloody Jack (2007), The Lodger (2009) and Whitechapel (tv mini-series, 2009); a parody segment of Amazon Women on the Moon (1987) that speculates that the Ripper was in fact the Loch Ness Monster; the Babylon 5 episode Comes the Inquisitor (1995) that reveals the Ripper was taken up by aliens and redeemed; transposed to Gotham City in the animated Batman: Gotham By Gaslight (2018); even turning up as a character in the French animated film Jack and the Cuckoo-Clock Heart (2013). Also of interest is the tv series Ripper Street (2012-6), a detective series set in London in the immediate aftermath of the Ripper killings.