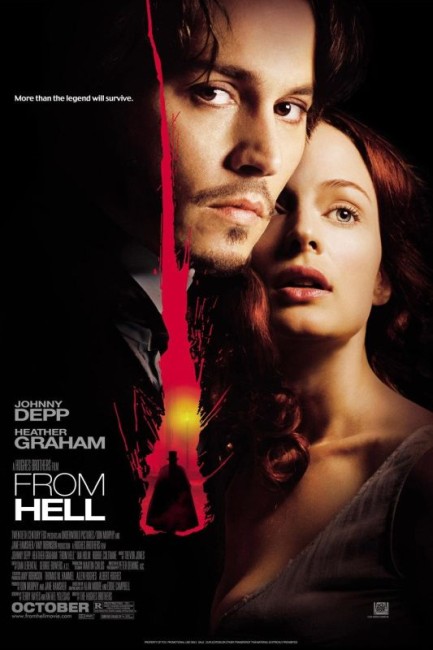 In 1888, Frederick Abberline, a Scotland Yard inspector who claims to be able to solve cases by visions he receives while under the influence of opium, is placed in charge of the Jack the Ripper case involving the murders of a series of prostitutes in Whitechapel. Abberline’s investigation takes him on a contorted trail of a conspiracy to execute the prostitutes that originates from within the highest ranks of government. At the same time, the course of the investigation also draws Abberline close to one of the prostitutes Mary Kelly who is earmarked as a victim for the things that she knows.

From Hell is a modern version of the Jack the Ripper case and was adapted from Alan Moore’s popular graphic novel. The Jack the Ripper legend has fuelled much cinematic myth from works like Alfred Hitchcock’s The Lodger: A Story of the London Fog (1927), four times remade as The Lodger (1932), The Lodger (1944), Man in the Attic (1953) and The Lodger (2009), Jack the Ripper (1959), Jack the Ripper (1976), the centenary tv mini-series Jack the Ripper (1988), the German Jack the Ripper (2016) and Ripper Untold (2021). And then there are more way out versions such as A Study in Terror (1965) and Murder By Decree (1979) where Sherlock Holmes solves the case; Time After Time (1979) where sf writer H.G. Wells pursues the Ripper through time to present-day San Francisco; various re-enactments in the present day such as Jack’s Back (1988), Ripper: Letter from Hell (2001) and Whitechapel (2009); the Star Trek episode Wolf in the Fold (1967) where Scotty is possessed by the spirit of The Ripper; and the Babylon 5 episode Comes the Inquisitor (1995) where the Ripper has been snatched by aliens and makes a return appearance as a redeemed inquisitor. Very few of these bear much resemblance to the case – only Murder By Decree, the 1988 mini-series and Whitechapel name any of the canonical suspects or even have characters based on the known victims.

From Hell comes from the twin brothers Albert and Allen Hughes. The Hughes Brothers grew up in Harlem, coming from a mixed Black-White racial background. Their previous films were the gangsta film Menace II Society (1993), the heist thriller Dead Presidents (1995), the fascinating documentary American Pimp (1999) and subsequent to this, the post-holocaust film The Book of Eli (2010), while Albert solo directed the prehistoric drama Alpha (2018). While a Harlem hood upbringing makes for a decidedly unusual background for directing an historical film about murders in Victorian England, one should not judge filmmakers for their background. After all, the Hughes Brothers’ made some positive noises about the detail of forensic authenticity they went to in regard to portraying the murders.

Alas with From Hell, the Hughes Brothers’ fail to leave their background behind and it tends to get in the way of historic plausibility. In interviews, the Hughes Brothers’ said they viewed Whitechapel as just another version of Harlem. While both are ghetto neighbourhoods, approaching Whitechapel as just another Harlem lends to some jarring anachronisms. Thus the hookers are now harassed by the Victorian equivalent of pimps and in a libellous move Inspector Abberline is made into the Victorian equivalent of a crack addict – we are first introduced to a stoned Abberline in an opium den and the Hughes Brothers’ seem fascinated with and show in closeup throughout the Victorian equivalent of freebasing laudanum (although they are inaccurate in saying that the use of laudanum was not widespread – even Queen Victoria was a user).

From Hell was heavily anticipated prior to release and it proved a reasonable hit. What is disappointing about From Hell is that it is clearly a Hollywood blockbuster first and a documentation of the Jack the Ripper case second. The Hughes Brothers use the historic facts of the Jack the Ripper case as only a loose canvas and seem willing to rewrite these whenever it suits them. The most notable thing is that the facts have been bent out of shape to accommodate young Hollywood leads. For instance, Johnny Depp only seems around 30 on screen whereas the real Inspector Abberline was 45 at the time of the Jack the Ripper case. Moreover, nobody seems to have done any biographical research on the real Inspector Abberline as they outfit him with a working class accent whereas Abberline was middle-class. Not to mention the fact that the film kills his wife off and invents a death scene for him, whereas in fact Abberline died in 1929 at the age of 86, some 40 years after the film has him doing so. The hookers are also cast as being in their 20s, whereas in reality all except Mary Kelly were in their 40s. Most irritating is the film’s inventing a romantic relationship between Inspector Abberline and Mary Kelly and an absurd ending where the wrong person is killed so that she can happily survive and walk off into the sunset with him.

What is even more infuriating is From Hell‘s reliance on one of the hokier Ripper theories – that the killings were organized by a Freemason conspiracy in order to protect the country from finding out about Prince Albert Victor’s marriage to a prostitute in a Catholic ceremony. This is a theory that was put forward in a 1973 BBC documentary and then elaborated by Stephen Knight in his book Jack the Ripper: The Final Solution (1976). This is an ingenious theory, no denying, but one that has little plausibility outside of conspiracy theory and one that has been criticized by Ripperologists for its basis more in hearsay and unfounded speculation than in any hard supporting evidence. The idea of Prince Albert Victor marrying a Whitechapel prostitute is akin to say Prince Charles having an illicit affair with a $5 crack whore. One piece of ‘proof’ that Stephen Knight bases his argument on is a piece of graffiti found several blocks from the Catherine Eddowes murder – “The Juwes are not men that will not be blamed for nothing,” which Stephen Knight inventively suggests was not, as always assumed, a misspelling of ‘Jews’ but reference to three mythical Freemason assassins. What Knight fails to take into account is the likelihood of his theory – firstly, there is no proof the graffiti even came from the Ripper’s hand. Secondly, did anybody think that the word of half-a-dozen gin-soaked whores would be taken seriously enough to unseat an empire? Nor do the killings seem like assassinations – if the women were being assassinated someone might slit their throats but the women were extensively butchered and sexually mutilated, clearly indicating that the killer was not so much carrying out their duty as they were enjoying what they were doing. Lastly, is it likely considering the secrecy with which the Freemasons usually carry out their business that one of the assassins, fleeing the scene in an area that was being heavily patrolled by the police, would stop to write a cryptic, not to mention grammatically incoherent, piece of graffiti advertising their presence? It should also be pointed out that the Freemason conspiracy and Annie Crook story did not emerge until 1973, not at the time of the Ripper murders, and that Inspector Abberline himself was insistent up until his death that Jack the Ripper was the Polish barber Severin Klosowski/George Chapman, whose name is not even mentioned in the film. The fact that the only Jack the Ripper films to air any of the theories argued in Ripperology – Murder By Decree and this – resort to this complicated and improbable theory surely says something about the public fascination with conspiracy theories.

For all that From Hell was heralded as a shocking new glimpse into the Ripper case, it offers nothing new. Its theorizing only consists of a shallow stumble through one of the more credulous theories out there. Indeed, it looks like an investigation into the Jack the Ripper killings conducted as a pastiche of the modern serial killer film, with the Hughes Brothers’ bringing to bear the stylistic arsenal of tricks that fell upon the genre following Se7en (1995) and tv’s Millennium (1996-9). Victorian London exists more as a fantasy of Gaslight London than any historical place – it comes with landmarks framed against orange and red clouded skies, cameos from Joseph ‘The Elephant Man’ Merrick, gargoyles and crows lurking over the landscape with ominous symbolism, and rather laughably an elevated steam train railway running through Whitechapel.

Inspector Abberline is turned into a mystical clairvoyant whose understanding of the case comes less from any detective work or deduction than by opium addled visions. Abberline has hunches that the killer is ‘educated’, that the graffiti is significant, that the killer has a medical background but rarely does the film take us through any deductive reasoning to show how he reaches such conclusions. Moreover, the Hughes Brothers’ take seriously mystical nonsense about there being pentacle patterns to the killings and of the significance of quasi-religious place names like ‘Whitechapel’ and ‘Mitre Square’, which only does their attempt to seriously examine the case an injustice.

The result – considering the budget and the top name cast (which includes some of the finest names in the British industry including Ian Holm, Ian Richardson, Robbie Coltrane, Ian McNeice and the underrated Susan Lynch who is due a major breakthrough part any day now) – is a disappointing waste of what could have been a great opportunity. The definitive Jack the Ripper film has yet to be made.

The original From Hell graphic novels were published by Alan Moore in ten volumes between 1991 and 1996 and hold a much more complex story that has largely been ditched by the film. Alan Moore’s work has been popular on screen in recent years with adaptations of The League of Extraordinary Gentlemen (2003), Constantine (2005) (based on Hellblazer), V for Vendetta (2006), Watchmen (2009), the Mogo Doesn’t Socialize and Tygers episodes of Green Lantern: Emerald Knights (2011), Batman: The Killing Joke (2016) and the tv series Watchmen (2019). It should be pointed out that Alan Moore has disowned all of these adaptations to the point that he refuses to accept any screen credit.

(Winner for Biggest Disappointment at this site’s Best of 2001 Awards).