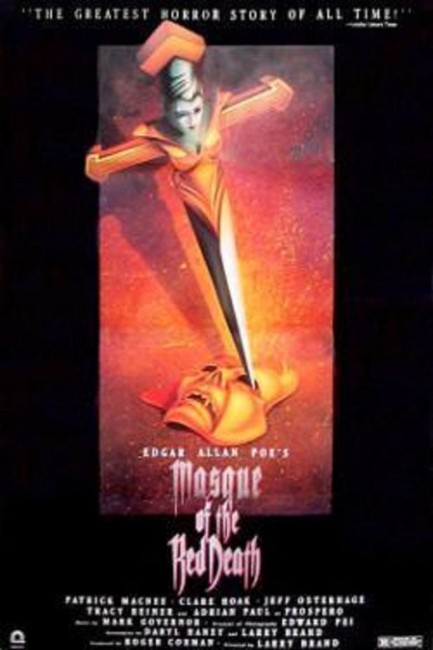 Prince Prospero fears the Red Death that ravages the land. He invites a party of nobles to his castle and walls them inside so they can revel away from the plague’s influence. Along with them they take a group of village girls for their pleasure. Amongst these, Prospero finds himself wanting the beautiful Julietta. She says that if he respects her he must wait instead of taking her. As Prospero meditates on the dominion he holds, the Red Death arrives in person to teach a lesson.

Masque of Red Death was one of a spate of Edgar Allan Poe adaptations that underwent a mini-revival around 1989-90 (and promptly disappeared no doubt due to the failure of a single worthwhile film to emerge from the trend). This fad also included The House of Usher (1989), the Roger Corman produced The Haunting of Morella (1990), Luigi Cozzi’s The Black Cat (1990), George Romero and Dario Argento’s Poe anthology Two Evil Eyes (1990), Fred Olen Ray’s The Haunting Fear (1991) and Stuart Gordon’s Pit and the Pendulum (1991), as well as another version of Masque of the Red Death (1990) from Alan Birkinshaw.

This version of The Masque of Red Death (1842) is a drab and dreary affair. What makes it even more sad is that it is produced by Roger Corman who directed and produced the previous version The Masque of the Red Death (1964), which is a splendidly gloomy study in cruelty and sadism that is one of the finest of all screen Poe adaptations. Certainly, this Masque copies much of its plot from the 1964 Masque – in having Prince Prospero take a girl from the village, develop feelings for her and the subplot in which she is envied by Prospero’s sister.

What this version lacks is just about everything else that made the 1964 Masque of Red Death work. Vincent Price’s Prospero was a study in the cruelty of power wielded for its own sake; by contrast, this film’s Prospero, played by Adrian Paul, who had yet to develop the smouldering screen sexuality he would as star of tv’s Highlander (1992-7), is pouty and wooden. He wields occasional moments of cruelty but Paul’s performance is more aloof and bugged-out, while the script drags the character through a series of pathological meditations on the fear of dying.

The production is drab. Nothing ever much happens in the film. The masque is a shabby affair and the sets lack the sumptuousness of the decor in the 1964 version. Everybody, especially Adrian Paul and Jeff Osterhage, wears unconvincing wigs. The film is even, despite twenty-five years of loosening of morals, a thoroughly tame affair when it comes to portraying any of the supposed depravities and tortures going on. What is perhaps saddest is that Roger Corman, after having directed the great original, could fall so widely from the mark in attempting to repeat things a second time around.