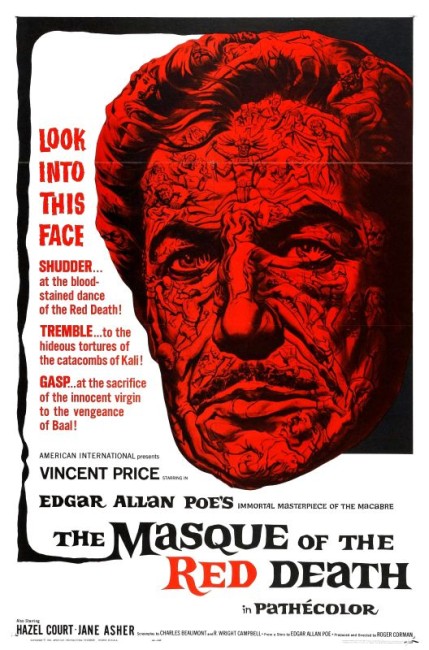 The cruel and sadistic Prince Prospero burns the village of Cartania to the ground when he finds that one villager has contracted the Red Death. The innocent Francesca begs Prospero to save the lives of her father and the man she loves, so Prospero asks her to choose which one he will kill and which he shall spare. Prospero then decides to take all of them to his castle. There he, a practicing Satanist, is determined to corrupt Francesca’s innocence. However, the Red Death has promised the villagers their freedom and makes a surprise appearance during a costumed masque held by Prospero.

The Masque of the Red Death was one of the seven-and-a-half Edgar Allan Poe adaptations made by producer-director Roger Corman between 1960 and 1964. (The half is The Haunted Palace (1963), which only uses the title of Poe’s poem and in fact adapts an H.P. Lovecraft story). In his Edgar Allan Poe series, Roger Corman was clearly inspired by the Gothic revival that had been stimulated by Hammer Films in England beginning in 1957. The Edgar Allan Poe adaptations, all but one of which starred Vincent Price, brought Roger Corman critical attention as a director and took him away from being a director of the no-budget (albeit zesty) hackwork he had churned out for James H. Nicholson and Samuel Z. Arkoff at American International Pictures in the late 1950s. The Masque of the Red Death was the sixth and second to last of Roger Corman’s Poe adaptations and is generally the most critically acclaimed of them all.

As with most of Roger Corman’s Edgar Allan Poe adaptations, Corman and his writers – in this case acclaimed fantasy author Charles Beaumont, who wrote 7 Faces of Dr Lao (1964) and science-fiction author R. Wright Campbell – have taken a fragment that is the Edgar Allan Poe story and padded it out into a feature-length script. The Masque of the Red Death (1842) is a three-page short story, which is essentially a set-up for a sombre twist ending where the Red Death attends Prospero’s masque in person. Thus Charles Beaumont and R. Wright Campbell have to invent a backstory to make Prospero come to life. (They also throw in the Edgar Allan Poe story Hop-Frog (1849) to pad things out).

They make the script into an amazing study in cruelty and sadism. In the opening scene, Jane Asher begs for the lives of her father (Nigel Green) and lover (David Weston) to be told by Vincent Price that she must choose which of the two will be allowed to live; later Price constructs a game where the two men must alternately gash themselves with daggers, not knowing which of the daggers is poisoned. A husband and wife come begging Prospero’s asylum from the Red Death, the man offering his wife to Vincent Price to which Price coldly replies “I’ve already had that pleasure” and then shoots the man with a crossbow bolt and throws the woman a sword “Spare yourself madam.”

In this version, Prospero and Prospero’s sister, played by an alarmingly jealous Hazel Court, are also Satanists. This makes The Masque of the Red Death the first Hollywood film, apart from fitful early attempts such as The Black Cat (1934) and The Seventh Victim (1943), to actually mention Satanism. It is fairly tame in comparison to the depictions of Satanism that emerged after Rosemary’s Baby (1968) and The Exorcist (1973) – not much more than a drug-trip sequence with a few cackling masked figures, although there is a good shock sequence where Hazel Court brands herself as Satan’s bride with an inverted crucifix.

The Masque of the Red Death is the most sumptuous of all Roger Corman’s Edgar Allan Poe adaptations with some expansive castle interior sets, most notably a series of interlocked rooms with each in a single colour scheme. (This was the point that Roger Corman moved production base of the Poe films to the UK and was able to take much greater advantage of the studios there and make his budget go further). The film is also luxuriously photographed by a young Nicolas Roeg, who would only a few years later embark on his own directorial career with the likes of Don’t Look Now (1973), The Man Who Fell to Earth (1976) and The Witches (1990).