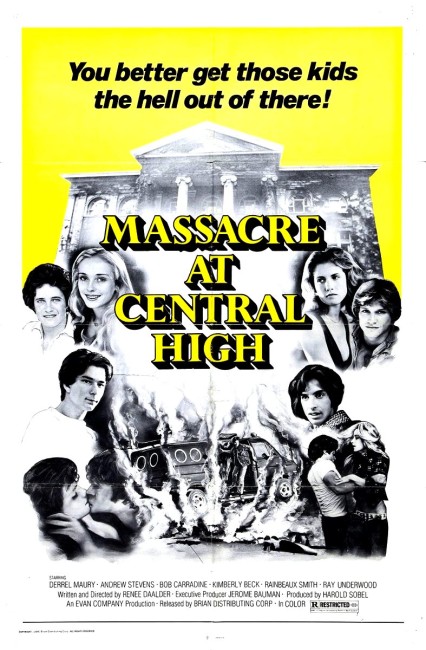 David moves into a new neighbourhood and registers at the local high school. His old friend Mark is also a pupil and introduces David to the three bullies that rule the school. David declines their invitation to join the group. However, when he finds the three of them in the process of raping a girl, he forcibly intervenes to stop them. They take revenge by kicking out the jack holding up the car that David is repairing, breaking his leg. Soon after, David arranges a series of accidents in which all three of them are killed. The rest of the school rejoices in their freedom. But when, in their newfound independence, they begin to exert the same authority as the ousted bullies, David goes into action again.

Massacre at Central High was mounted as cheap exploitation film. It is however an exploitation film that at least rises to some interesting levels of political metaphor. This was something that gained it a small reputation and a surprise listing in Danny Peary’s Cult Movies (1983).

What is surprising about Massacre at Central High over and above most other slasher/revenge films is the sharp level of political allegory. The allegory is the same as in George Orwell’s Animal Farm (1945) – see the film version Animal Farm (1954) for details – that of the liberated regime that goes full circle to become the new oppressors.

That said, the politics are expressed far too crudely to make Massacre at Central High anything beyond a 1970s sub-Death Wish (1974) item of passing peculiarity. (One of these peculiarities is that there are no adults ever seen in the film). The rest of the film is squarely in exploitation territory set around various set-piece killings and topless girls. It is crudely made technically and there is some bad acting – most notably lead bully Steve Bond.

Director Renee Daalder then vanished from cinema screens, bar occasional work as a visual effects artist, before returning a decade later with the very obscure post-holocaust film Population One (1986) and then a further decade later with Hysteria (1996), set in an insane asylum, and the bizarrely awful post-holocaust plant mutation film Habitat (1996), followed by a couple of documentaries before his death in 2019.