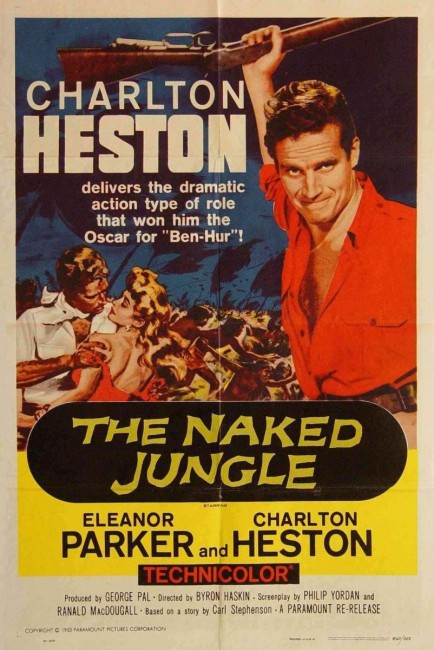 Joanna Selby travels deep inside the South American jungle to meet for the first time Carl Leningen, a man she has married by mail order. Leningen is the owner of a vast plantation that covers 200,000 acres. Once there, Joanna is shocked at the savagery of life among the Indians that work on the plantation. However, Leningen rejects Joanna when he finds that she has been married before, not wanting to take ‘another man’s pickings’. They are then forced together in the face of an army of marabunta ants that enters the estate, devouring everything in their path.

In the 1950s, producer George Pal came to considerable prominence with his various science fiction films – most notably Destination Moon (1950), When Worlds Collide (1951), The War of the Worlds (1953) and The Time Machine (1960), which enjoyed considerable success. The other non– or borderline genre films that Pal made during this era, such as Houdini (1953) and The Naked Jungle, are usually neglected in the shadow of his science-fiction films. Certainly, The Naked Jungle never looks like a George Pal production – it lacks the Technicolor stolidity, the focus on special effects at the expense of human interest, Pal’s often heavy-handed Catholic underpinnings and it has, of all surprises, a literate story.

The Naked Jungle is adapted from Leiningen vs the Ants (1938), a classic short story that was made famous through a well-known radio adaptation in 1948. George Pal hands the scripting chores over to Phillip Yordan, who became celebrated in the next decade with the scripts for Studs Lonigan (1960) and various historical epics – El Cid (1961), King of Kings (1961) and The Fall of the Roman Empire (1964). Alas, Phillip Yordan seemed to have less success whenever he ventured into science-fiction, having made ham-fisted botch-ups of both Pal’s Conquest of Space (1955) and the later adaptation of The Day of the Triffids (1962).

Carl Stephenson’s original short story is a classic straightforward adventure that tells of the encroachment of the ants across a man’s plantation – in fact, the character of Joanna does not exist in the story. In the film by contrast, the ants do not arrive on the scene until two-thirds of the way through and the bulk of this version is taken up by the relationship between Charlton Heston and Eleanor Parker. This is something that is dealt with with an unusual degree of strength and some fine, literate writing. Charlton Heston for once keeps the trademark lantern jaw clenched towards some cruel and tortured but ultimately humane emotings, while Eleanor Parker plays opposite him with an appropriate intelligence.

The images of the jungle presented are as alien a world as anything in any of George Pal’s more straightforward science-fiction pictures – the sense that Eleanor Parker has passed well beyond the limits of civilisation. “Stay at the house [for safety],” Charlton Heston tells her at one point, “civilisation ends there.” The sense of being in an alien world is no better presented than the image of the piano that Charlton Heston has had shipped out, telling her that he would like to hear it played before the termites devour it. Phillip Yordan swings some strong and effective metaphors – the sense of a man symbolically pitted against the ferocity of nature and fighting an aggressive war for supremacy (the ants are symbolically turned back at the very door of his house), a battle that Heston only wins by overcoming his pride and hubris.

The production values are excellent. The Technicolor photography is ravishingly beautiful. Some of the effects shots like those of the fires springing up beyond the gates, or the mattes of the ravaged jungle and bared land are excellent. The director was frequent Pal collaborator Byron Haskin, who had previously made Pal’s The War of the Worlds. Byron Haskin directs with humour and a crisp dramatic edge, none more so than the excellent survivalist trek at the end. The film culminates in a massive climactic battle with the ants and some fabulous scenes of destruction. A great film.

Byron Haskin worked with George Pal on several other occasions including The War of the Worlds, Conquest of Space and The Power. Haskin also directed a number of other genre films including Tarzan’s Peril (1951), From the Earth to the Moon (1958), Captain Sindbad (1963) and Robinson Crusoe on Mars (1964), as well as episodes of the classic science-fiction anthology series The Outer Limits (1963-5).