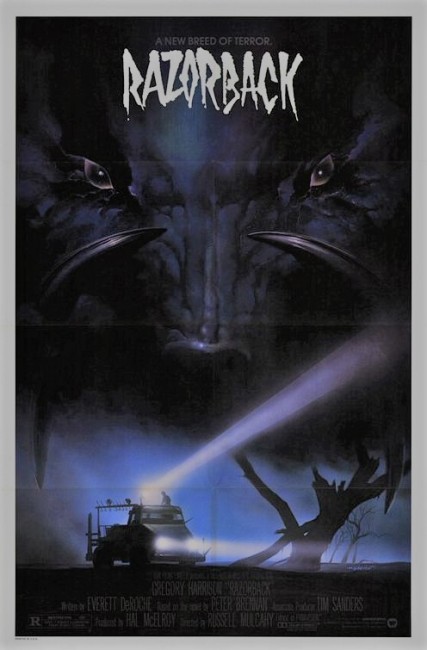 New York tv journalist Beth Winters travels to the town of Granulla in the Australian Outback to conduct an investigation into the kangaroo slaughter industry, which has become so widespread that the kangaroo is nearly extinct. When she sneaks into investigate the Pet Pak slaughterhouse with a camera, she is seen by the two psychopathic owners, brothers Dicko and Benny Baker, who pursue her and drive her car off the road. They go to rape her but flee with the appearance of a giant razorback boar, which kills Beth. After Beth is reported missing, her husband Carl comes to Australia in search of answers. He is joined by a graduate scientist researching the boars and a farmer accused of killing his grandchild who is trying to prove that it was devoured by the razorback. Despite his efforts being thwarted by the Baker brothers, Carl sets out to hunt down and kill the razorback.

In a capsule description, Razorback is Jaws (1975) with tusks. There is a slim veneer of political awareness concerning the kangaroo slaughter industry but that fools nobody as to Razorback‘s real intent. And when it is being, plain and simple, an out-and-out monster movie, Razorback arrives as one of the best films to try to sink its tusks into the Jaws cash register.

Razorback was the feature-length debut of Australian director Russell Mulcahy. Before making his film debut here, Russell Mulcahy had established himself as one of the most stylish of the MTV generation of directors with his groundbreaking videos for quintessential 1980s groups like Duran Duran – indeed, Mulcahy directed the very first ever MTV clip with The Buggles’ Who Killed the Radio Star? (1981). Mulcahy would go on from the modest international success of Razorback to become a regular genre directors through the next two decades. (See below for Russell Mulcahy’s other films).

Returning to his native Australia fresh from his successes in music video, Russell Mulcahy united with Mad Max 2 (1981) cameraman Dean Semler to make Razorback. Razorback is a film that belongs to the two of them. Mulcahy transforms the desolate outback locations into an eerie shadow-land of surreal imagery. This is never more apparent than the razorback attack that takes place during the prologue, where the scene comes with children’s swings blowing in the breeze, with scarecrows and wire fences outlined against vermilion sunsets and the bloated shadow of a weathervane covering a whole house as it turns in the light of an approaching storm.

Australian cinema always seems to have had a quasi-mystical relationship with the Outback and this is none more evident than here. Mulcahy and Dean Semler transform Gregory Harrison’s trek across the desert in the middle of the film into something set in an alien world – one of burnt landscapes that change from oranges and ochres to blues and purples, and comes filled with forests of ghostly trees eerily floating out of filigreed tendrils of mist, even one tree with a wrecked car inexplicably caught in its branches.

Not to give the impression that Russell Mulcahy is merely a director of pretty images. The razorback attacks have an aggressive, vibrant visual energy and the climactic confrontation in the slaughterhouse is a genuine seat-hanger. The razorback itself looks incredibly mean, although even Mulcahy’s quick cutting fails to disguise the fact that it does not move much. Some amusement might be found by Australian audiences who are bound to notice the prologue’s seemingly straight-faced cobbling of the infamous Lindy Chamberlain baby-snatched-by-a-dingo murder trial – the same story that was filmed with Meryl Streep as Evil Angels/A Cry in the Dark (1992).

Gregory Harrison is imported for American marquee name value but is unmemorable. There is always a certain broadness of playing in Russell Mulcahy’s films, with the film here being captured in a large part by David Argue and Chris Haywood as the two psychopathic slaughtermen whose disturbed behaviour is chillingly conveyed.

The merits of Razorback are discussed at length in the documentary Not Quite Hollywood: The Wild, Untold Story of Ozploitation! (2008).

Russell Mulcahy went onto become a major genre director. His big breakthrough success was the fantasy film Highlander (1986), which launched a long-running franchise. Subsequent to that, Mulcahy made the awful Highlander II: The Quickening (1991), the revenge drama Ricochet (1991), the mystical radio superhero adaptation The Shadow (1994), the revived mummy film Talos the Mummy/Tale of the Mummy (1998), the serial killer thriller Resurrection (1999), the tv mini-series remake of On the Beach (2000), the tv mini-series of Jules Verne’s Mysterious Island (2005), the tv mini-series The Curse of King Tut’s Tomb (2006), Resident Evil: Extinction (2007) and The Scorpion King: Rise of a Warrior (2008). Mulcahy also wrote/produced the killer shark film Bait (2012).

Screenwriter Everett de Roche has written a number of other Australian genre films including the excellent Nature’s Revenge film Long Weekend (1978), Patrick (1978) about a psychic coma patient, the stalker psycho-thriller Snapshot/The Day After Halloween (1979), Harlequin (1980) about an enigmatic magician, the psycho-thriller Roadgames (1981), the killer chimp film Link (1986), the Aboriginal children’s fantasy Frog Dreaming/The Quest (1986), the psycho-thriller Heart of Midnight (1988), the ghost story Visitors (2003), the Backwoods Brutality film Storm Warning (2007), the remake of Long Weekend (2008) and Nine Miles Down (2009) about a mineshaft to Hell.