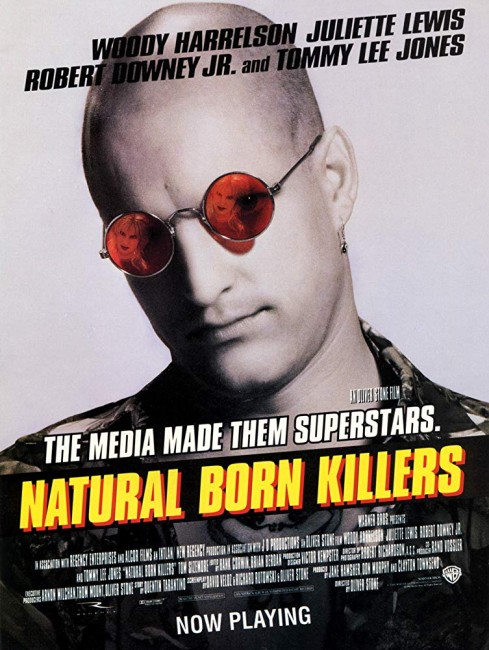 Lovers Mickey and Mallory Knox travel across the country on a blood-soaked killing spree. Their murder spree becomes a media sensation when it is glorified by the tv show ‘American Maniacs’ and they attain a cult following.

Oliver Stone may be one of the either-love-them-or-hate-them directors. I tend to fall into the former. For all the things that one has to forgive Oliver Stone for – a bombastic, tub-beating need to hit an audience over the head with a message – there is much that many mainstream reviewers tend to dismiss far too easily. For one, Oliver Stone should be celebrated for being one of the few American directors out there with an articulate political voice who is prepared to place complex issues on film without resorting to easy feelgood sentiments.

Oliver Stone is one of the 1960s baby boomers who invariably yearns for a much more innocent era – that of the Great American Dream of Camelot. For Oliver Stone, America’s innocence was irrevocably punctured by the shooting of JFK and the Vietnam War (which Stone served in). Stone’s films fixatedly return to these events and echo with an apocalyptic sense of the poisoning and corruption of American society ever since. These dual fascinations – with the crashing of the post-War American dream and the sick society – obsessively play out in his work.

When not revisiting the 1960s and its aftermath with an angry political voice, Stone’s films erupt with explosions of sociological psychosis – Talk Radio (1989) could be called a psycho film without a psycho in which radio talkshow host Eric Bogosian willingly stirs up of the sick, the paranoid and the redneck elements of society, culminating in his own shooting; in The Doors (1991), Stone sees Jim Morrison’s infatuation with a life of excess and altered states of consciousness as a death wish that ultimately brought him down; and U Turn (1997) is a heavy-handed noir in which a small town bursts at the brims with suppressed psychosis. Natural Born Killers came out at the height of the O.J. Simpson trial. In the film, Stone sees our culture’s obsession with media sensationalism and the raising of serial killers and mass murderers to the objects of perverse curiosity as yet another symptom of social pathology.

Oliver Stone’s films of the latter half of the 1990s tend to be weighted down by heavy-handed stylism. However, Natural Born Killers is one of the more outrightly enjoyable of Stone’s films. The film’s political messaging is relatively easy to ignore and the film is worth watching for the sheer exhilaration and exuberance of Stone’s direction. Stone shoots the entire film like a feature-length MTV clip. The camera is never maintained on a horizontal level once throughout and the film seems to randomly flip back and forth between colour and black-and-white, wildly different film stocks, video-shot footage, negatives and animation, even briefly turning itself into a parody of a sitcom. Stone will play with just about any effect for the sake of it – words are randomly projected across characters chests, while during the cross country drive fireworks and road footage very obviously play on a projected screen behind the car.

The film immediately hits in from Stone’s showoff opening scene in a bordertown cafe where Woody Harrelson and Juliette Lewis beat up and kill the hick locals. Here Stone dazzles with such flourishes as having the camera follow speeding bullets and thrown knives and looking down a gun barrel as it dallies back and forth playing eenie-meenie-minie-mo as to which of the two survivors they will shoot. The film does get overly long in the middle where Stone sidetracks off into a pointless excursion into the same Indian mysticism that unbalanced The Doors, but that is the only fault in the film’s visual kinesis.

Woody Harrelson relishes the opportunity to trash the image he built up from five years playing the lunkheaded, gold-hearted barkeep Woody Boyd on Cheers (1982-93). Pointedly, Harrelson’s drawled “Shit, I’m just a natural born killer,” comes with the same lazy Southern drawl that each one-liner he delivered behind the bar on the small-screen did. Juliette Lewis – who was for a time one of the most promising actresses of the 1990s – is wonderful, playing with a pinched mouth meanness – sort of like a younger Sandra Bernhard – that can vary between girlish enticement and cynicism in an instant. Although, Robert Downey Jr’s part as the hyped-up Australian tabloid tv host is too broad and Tommy Lee Jones, in a bizarrely effeminate 1950s coiffe and sideburns, badly overplays, bawling out his lines every time he appears on screen.

Natural Born Killers attracted a great deal of controversy – being banned in England – and was called everything from sick to boring to brilliant by the public and reviewers. Most notorious was John Grisham’s ridiculous call for filmmakers to be held legally accountable for inspiring real-life murders after a duo went on a killing spree in Texas after supposedly watching Natural Born Killers numerous times.

Most reviewers took a deadeningly literal interpretation in seeing Natural Born Killers as a statement about the media sensationalism of violence. That is not quite what Oliver Stone is on about – Natural Born Killers is more a fling with the fin du siecle death wish madness of the 90s postmodern road movie – Wild at Heart (1990), Thelma and Louise (1991) and Kalifornia (1993) (which was also about a serial killer on the lam and starred Juliette Lewis). Stone’s failing is to give into heavy-handed preachiness about media sensationalism, particularly at the end when Mickey and Mallory lecture Robert Downey Jr’s tv host about how sick he is before blowing him away, with Stone making his point by cutting away to tv footage of the Tonya Harding, Menendez Brothers and O.J. Simpson trials.

Natural Born Killers was based on an early script by Quentin Tarantino. In interviews, Tarantino was unhappy with the heavy-handed way that Oliver Stone treated the material. Tarantino more than likely drew inspiration from the true life mass murder spree conducted by Charles Starkweather and his girlfriend Caril Fugate in the 1950s. A more historically accurate account of the Starkweather-Fugate murder spree can be found in Badlands (1973), Stark Raving Mad (1983), Murder in the Heartland (tv movie, 1993) and Starkweather (2004).

Oliver Stone has made a number of other ventures into genre material. He debuted as director with a duo of horror films – the bizarre deathdream Seizure/Queen of Evil (1974) and The Hand (1981) with Michael Caine being stalked by his severed hand. Stone also co-wrote the screenplay for Conan the Barbarian (1982), all before becoming an A-list director. Following his success, he has acted as producer on a number of other directors work including:– Kathryn Bigelow’s psycho-thriller Blue Steel (1990), the superb Cyberpunk tv mini-series Wild Palms (1993) and Freeway (1996), Matthew Bright’s deconstructed version of Little Red Riding Hood.