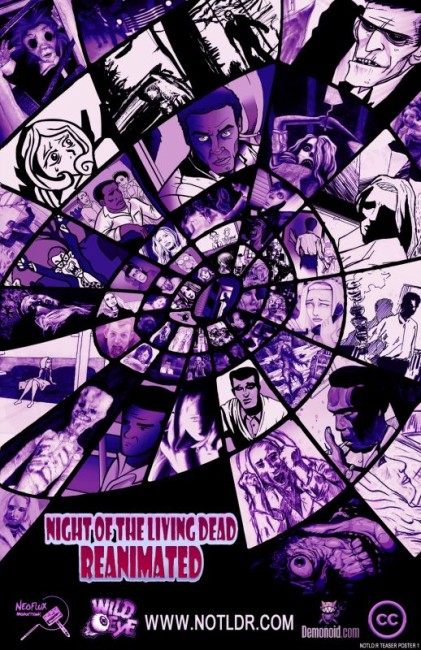 One of the most unique oddities among these Romero homages was Night of the Living Dead Reanimated. Digital animator Mike Schneider realised that the original was in public domain and thus free for use and had the idea of ‘renaimating’ it. He sent out requests to artists he knew and placed ads on artist websites, Craigslist and claimedly even dating sites !!!, asking for people to animate segments of the film. Artists were given free rein to interpret the film. Their clips and artwork were then edited together and added to the audio soundtrack of Night of the Living Dead. Mike Schneider, who takes the credit of ‘organizer’ and ‘curator’ rather than director, oversaw which sections needed material – in cases where there were multiple submissions, these were voted on in polls at several zombie fan forums.

The first few minutes of Night of the Living Dead Reanimated are a bewildering experience as one keeps adjusting to the wildly diverse range of styles and formats. These abruptly switch between crude felt pen animated sketches (the very opening shot), exquisitely shaded hand-drawn animation, simple computer animation that looks like the 3d environment of a computer game, crude animatics with moving mouths, static drawings and comic-book panels in a variety of styles, even stop-motion animation with paper/cardboard figures or a puppet zombie that attacks the car as Barbara shelters inside. This is a film that requires anyone watching it to have seen and be familiar with the original – surely to anybody who has never seen Night of the Living Dead before, being introduced to it this fashion would be an utterly bewildering experience.

Some of the artwork and interpretations are extraordinary – scenes in stylised shadow silhouettes or grey on geometrically patterned black and white; the zombies outside as abstract triangle shapes animated by overlaid hand-drawn squiggles; Plasticine and Claymation; animated stick figures; the characters all in flat 2-D animation along the lines of tv’s South Park (1997– ); Ben and Harry becoming cartoon animals in the style of tv’s The Ren and Stimpy Show (1991-8); animated talking thumbs; the parts of the interviewees on the tv being conducted by sock puppets or else the zombies played by fluffy toys. We even get a stop-motion animated Lego version of Ben in action at one point. In another shot, the action becomes pixilated like an early low-resolution videogame, while a side panel relays the dialogue and action as though it were directions in a computer game.

There is an ingenious scene that uses real footage from the original but plays around with it, having a bug moving about the screen, hammering boards over the windows in the background, producing a keyring and cocktails as people describe doing so and polishing Harry’s bald head. In one of the more eccentric replacements, the scene where the zombies break into the house is depicted with animated Barbie dolls and Karen’s resurrection from the dead by a Barbie doll with blacked-out eyes.

As with a great many of the zombie films that have come out during the 2000s revival, some of the artists here see the need to pay homage or create sly in-jokes – during the cemetery scenes, one shot reveals some of the names on the gravestones as George Romero, Bill Hinzman and Judith O’Dea, all figures associated with the original film; a picture on the wall is the poster from Jaws (1975); the tv set is said to be a Twonky after the Arch Oboler film The Twonky (1953), a comedy about a tv set come to life; while the text that runs along the bottom of the tv newscast makes reference to Fiddler’s Green, the fictional location for Land of the Dead.