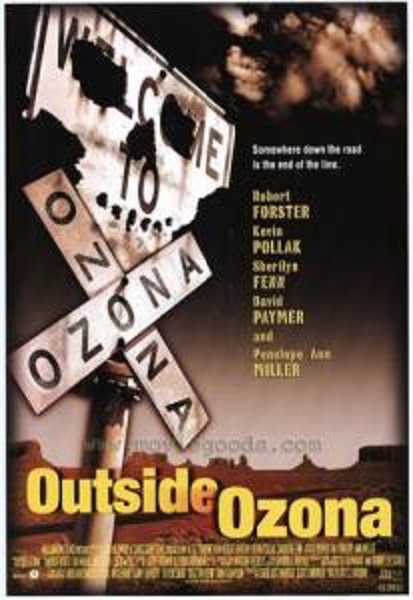 A serial killer has claimed his latest victim, leaving the body in a car outside the town of Ozona, Texas. The FBI visit Radio KWOK, the station that was playing in the car while the killer was driving, in an effort to find the killer’s patterns. During an all-night session at Radio KWOK, DJ Dix Mayal decides to defy his bosses by playing what he wants on air, as well as taking live callers. However, the killer starts to call in. At the same time, various people are driving towards Ozona. Truck driver Odell Parks gives Navajo girl Reba Twosalt a ride back to her pickup after she runs out of gas. As they drive, Odell finds himself attracted to Reba. The circus clown Wit Roy punches out his boss after he finds that he slept with Wit’s girlfriend Erlene. Wit quits and starts out driving with Erlene but they are almost completely penniless. Marcy Duggan and her sister Bonnie drive to their father’s funeral. Throughout the journey, the conservative Marcy argues with Bonnie that her husband should try to do better in life. Bonnie then decides to pick up a hitchhiker. Out there the killer is also lurking.

Outside Ozona is a psycho-thriller from director J.S. Cardone, a modest and prolific writer-director who has never gained the wider profile he deserves. Cardone made his directorial debut with the slasher film The Slayer (1982) and followed that with the rock film Thunder Alley (1985). Cardone has since made a regular variety of films, usually psycho-thrillers and almost all set in Texas.

J.S. Cardone’s other genre films have included the dream horrors/alternate dimension film Shadowzone (1990); the thriller A Climate for Killing (1991); Shadowhunter (1993) about an FBI agent hunting an Indian medicine man; the road movie thriller Black Day, Blue Night (1995); the vampire film The Forsaken (2001), which is probably Cardone’s most well known film; the murder mystery True Blue (2001); Mummy an’ the Armadillo (2004), a psycho-thriller set in a roadside cafe; 8MM2 (2005); and the zombie film Wicked Little Things (2006). Elsewhere, Cardone has also written the scripts for the killer android film Crash and Burn (1990), the thriller Exit in Red (1996), the sf film Alien Hunter (2003), Renny Harlin’s The Covenant (2006) and the remakes of Prom Night (2008) and The Stepfather (2009), and has produced several Sniper sequels as well as Vampires: The Turning (2005).

Outside Ozona is more of a character ensemble drama than it is a psycho-thriller. There are a number of similarities to Switchback (1997), which came out around the same time and also featured multiple character storylines in a psycho-thriller set in a drive across the state of Texas. J.S. Cardone’s strengths here are his characters. He gets good performances from all of his cast. Indeed, he seems to deliberately cast a number of actors in unusual roles that defy their previous body of work – most notably Sherilyn Fenn, a few years ago typecast as a slinky teen seductress, here playing a conservative upper-class housewife who spends the journey bickering with her less ambition-driven sister, and Penelope Ann Miller who plays a stripper. Not to mention Kevin Pollak playing a disgruntled clown. All do well and Cardone does a fine job in opening up each of the characters. There is also a soulful score.

Though Outside Ozona is a psycho-thriller, Cardone never concentrates on suspense or unexpected surprises – David Paymer’s psycho is obvious from the outset and Cardone keeps popping him up at appropriate intervals throughout, which adds a certain charge. There is an amusing scene where down-on-his-luck clown Kevin Pollak attempts to rob a convenience store, only for girlfriend Penelope Ann Miller to walk in on him and it to turn into a domestic – alas, Cardone lacks an adept hand for black comedy and the situation is never as dark as it could have been.

Nevertheless, Outside Ozona is a modest and reasonable effort that works with quiet effectiveness. If nothing else, it is a good deal better than the previous attempts to pit psychos against radio talkback hosts that we had in the likes of Don’t Answer the Phone! (1980), Open House (1987) and Dead Air (1994).