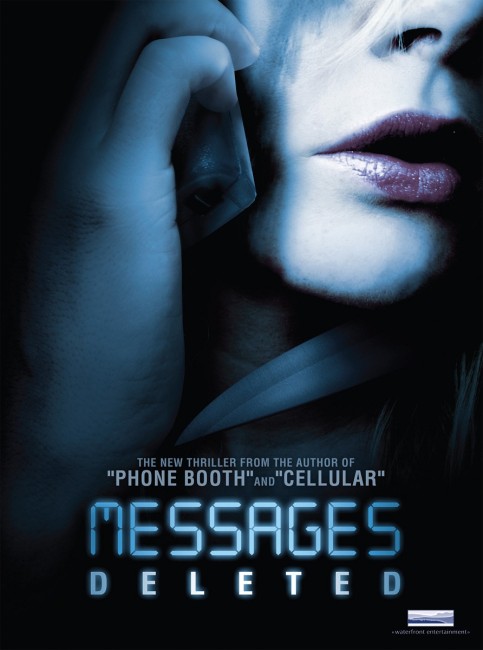 Joel Brandt teaches a screenwriting class, although has had little success as a writer himself, having only managed to sell one unproduced screenplay. He now receives a message on his answerphone from someone saying they are about to be killed. Not long after, Joel is in the street when a body falls in front of him. As the police arrive, he finds that the fallen body is the same person who called him. Joel receives more answerphone calls from people who turn up dead soon after. With the messages deleted, the police have difficulty believing this and think that Joel might be the killer. The killer leads Joel on a taunting chase that seems to relate back to the screenplay he sold. Joel realises that the killer believes he stole the idea from their screenplay and is determined to frame him for the murders.

Messages Deleted comes with a script from Larry Cohen. Cohen was a director who enjoyed great success in the 1970s/80s with a series of low-budget films that included It’s Alive (1974) and sequels, God Told Me To (1976), Q – The Winged Serpent (1982) and The Stuff (1985), among other works. (See below for a list of Larry Cohen’s other films). A cult following eventually accrued around Cohen. In later years, Cohen retired from directing and worked as a screenwriter, most notedly with the success of Phone Booth (2002). Messages Deleted would be the last Cohen script produced before his death in 2019.

Larry Cohen delivers an appealing meta script – Matthew Lillard is a screenwriting lecturer who finds that he is in the midst of a real-life murder mystery as a killer targets him, only to find out that real-life doesn’t always conform to the cliches of thriller scriptwriting. You suspect that Larry Cohen drafted the script around the time of Scream (1996) and sequels with their plots about teens discovering they are being stalked by a killer who is patterning their attacks according to the cliches of slasher films.

Cohen’s script is wonderfully playful. We get scenes with Matthew Lillard deconstructing the anonymous phone calls he is receiving and trying to make sense out of the killer’s motivation, or with him laughing about how cliche a police station looks as a hooker is escorted past and another cop sits eating donuts. In other scenes, he is protesting to the police that he has rights only to be abruptly awakened to the reality about what rights he really does have, or where they use his movie expectations of what a lie detector test is against him. It’s a wonderfully playful script that delights in its twists and turns,

The disappointment of the film is its third act. Here Cohen falls into the same contrived thriller plotting that he seems to spend the early parts of the film puncturing. The killer comes with improbable motivation and, as only a single individual, seems to have superhuman guile, luck and ability in being able to organise the murders and leave all of the evidence to point at Matthew Lillard.

I was hoping that the film would end in a battle of the wits between Lillard and the aggrieved writer/killer akin to the joyously ingenious twists and games of outsmarting one another that we had in Deathtrap (1982), which similarly pitted established author against novice writer in a battle over a stolen script, Unfortunately, the showdown between Matthew Lillard and the killer runs far more by the book. By this point, the meta-fictional play and puncturing of cliches seems to have run itself out.