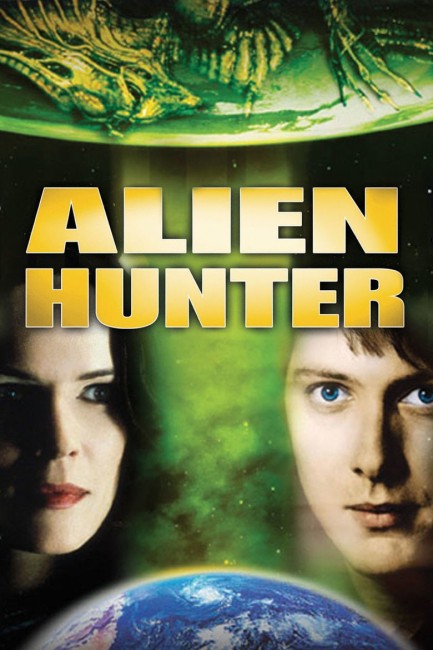 Julian Rome, a lecturer in linguistics at Berkeley and a former cryptologist with SETI, is shown evidence of a non-random burst of interstellar communication that originates from a mysterious artifact that had been unearthed at a scientific research base in Antarctica. Rome immediately flies down to the base where a team of scientists are conducting advanced research into genetically modified corn crops. One of the scientists is Kate Brecher, who Rome once had an affair when she was a student, which led to his being disgraced. The artifact is thawed out, revealing a pod of alien origin. Just as the scientists cut the pod open, Rome deciphers the communication as being a warning not to open it. Those near the scene immediately collapse, infected with a deadly pathogen. The alien inside revives and flees through the complex. Rome encounters the alien as it attempts to communicate with his mind, just before the others arrive and shoot it. They are then informed that the government has despatched a Russian submarine to fire a nuclear warhead on the base within three hours to prevent the spread of the pathogen. Tests show that the rest of them are not infected and debate rages whether they should escape to freedom in a plane before the warhead hits.

Alien Hunter comes from Nu Image, a production company that usually specialises in low-budget action films. A number of these have strayed over into genre territory with the likes of Cyborg Cop (1993) and sequels, the Project Shadowchaser series, Forest Warrior (1996), Judge and Jury (1996) and Octopus (2000) among others.

On the basis of J.S. Cardone’s name on the credits, one had better than average hopes for Alien Hunter. Certainly, Nu Image have managed to bring on board an impressive cast line-up, including James Spader essentially doing a repeat on his alien interpreter role from Stargate (1994), John Lynch and minor roles from Keir Dullea – who of course encountered mysterious alien artifacts himself in 2001: A Space Odyssey (1968) – and British actor Roy Dotrice. All of which seems to suggest that Nu Image were aiming a little higher than their usual direct-to-dvd films with Alien Hunter.

I admit to being a sucker for works about people trying to piece together communications from aliens – see The Arrival (1996), Contact (1997) and Sphere (1998). Alien Hunter starts well with the journey to the Antarctic base and the team of scientists puzzling over the pod. However, the film starts to fall flat when James Spader decodes the alien communication hidden between mathematical sequences on a radio wavelength and these suddenly emerge into perfect English saying ‘Do not open.” All the build-up to that point flops in a damp squib. And unfortunately, so does the rest of the film. Interviewed on the dvd extras, J.S. Cardone states that when he wrote the script he kept wanting to throw a twist on the audience every few minutes so they did not know where the film was going. Yeah, maybe, but it also ends up a schizophrenic film.

You also get the impression that J.S. Cardone was sitting back and thinking “what film can we borrow from/homage next?” First, we start out with a mysterious alien artifact uncovered in the ice at an Antarctic base – shades of The Thing from Another World (1951), which the film even quotes at one point with a black-and-white video image of men in a circle around a shape under the ice, one of the iconic scenes from The Thing. Next the film becomes about the mysterious object sending out communication bursts a la Contact and Sphere; for awhile, it becomes about a sinister black alien creature lurking in the corridors (with the power naturally being off) along the lines of Alien (1979); before Cardone throws in a contagion outbreak and a countdown to a nuclear blast and we finally arrive at an ending where the surviving cast are carried off to the stars in a mysterious alien ship a la Close Encounters of the Third Kind (1977) (where at least the shimmering jellyfish-like ship of lights is an impressively original creation). Cardone gets carried away with his homages to the point he even throws in references to Raiders of the Lost Ark (1981) during the introduction of James Spader at the university.

The problem with J.S. Cardone’s approach here is that he is so busy hopping genres that Alien Hunter never settles down into telling a satisfying story. Moreover, he leaves a great many loose ends – the prologue conducts yet another retelling of the Roswell Incident but this is unconnected to anything else in the film, while there is no explanation of what the UFO that appears at the end is. You also wonder why some things happen – like what an apparently benevolent alien is doing in hibernation in a pod buried in the Antarctic and why the pod is filled with a deadly pathogen and broadcasting messages about not opening it. The ending comes as something banally transcendental – however, it feels unearned, being there more to wrap a plot up that it ever conveys anything wondrous.

Nu Image shot Alien Hunter on the cheap in Bulgaria, which certainly does a more than reasonable job of standing in for an Antarctic base. James Spader, seemingly cast on the back of Stargate, does okay in the role – caught in the transitional period where he spent most of the 1990s playing uptight yuppies or slimy boardroom assholes and his triumphant emergence shortly after in the defining role of Alan Shore on tv’s Boston Legal (2004-8). Despite an impressive cast line-up, nobody else delivers any performance of note.