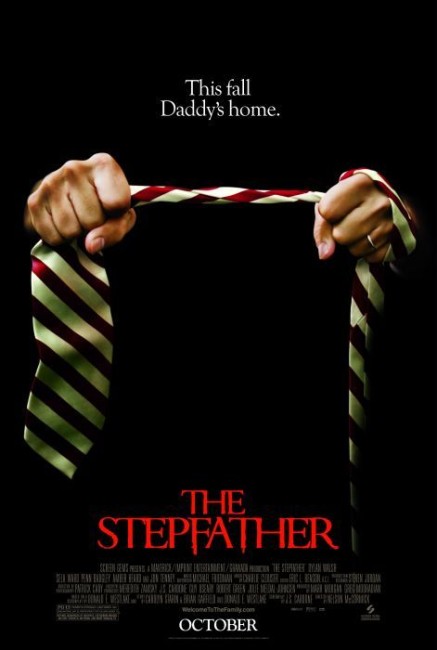 In Salt Lake City, Grady Edwards slaughters the family he has married into and vanishes. Police can find no trace of him. He then emerges in Portland under the name David Harris. He meets divorcee Susan Harding and her two younger children in a supermarket and befriends them. Six months later, Susan’s older son teenage Michael returns home from military school to find that Susan and David are engaged. David makes all effort to bond with Michael but Michael finds suspicious contradictions in the things that David says – such as mixing up the name of his daughter that he says died. When the old lady across the street mentions she thinks David is similar to Grady’s wanted picture on ‘America’s Most Wanted’, David kills her. He also kills Susan’s ex Jay when he becomes suspicious and Jackie, his employer at the real estate company, when she becomes insistent about wanting David’s details and id for tax records. Michael becomes increasingly more determined to find evidence of something suspicious about David. This causes David to decide that this family is not working out and that they too need to be eliminated.

The Stepfather (1987) starring Terry O’Quinn was one of the classic psycho-thrillers of the 1980s. It dug into the conservative values of other psycho-thrillers like Fatal Attraction (1987) in particular – where they featured some malevolent force come to split apart the family unit, The Stepfather showed the family unit itself as a toxic illusion and the antagonist of the show being a disturbed individual who was trying to adopt a bizarrely outmoded 1950s view of a perfect nuclear family and slaughtering them when they failed to meet up to his ideal. The Stepfather was a modest and acclaimed success and there were subsequent attempts to spin it out as a horror franchise with the theatrically released Stepfather II (1989), also featuring Terry O’Quinn, and the shabby cable-made movie Stepfather III (1992) where O’Quinn was replaced by Robert Wightman and the difference ingeniously explained away as plastic surgery.

There was also the interesting casting choice of Dylan Walsh as Terry O’Quinn’s replacement in the title role. I have admired Walsh in the tv series Nip/Tuck (2003-10) where he plays the role of an earnest nice guy and family man, something that is almost at 180 degrees remove from the flinty cleverness of Terry O’Quinn in the original. The idea of the kind of bland sincerity that Dylan Walsh plays there given a nasty undertow seemed to make for perfect casting. On the other hand, The Stepfather hovered in a distribution limbo for the better part of a year since mid-2008, which never bodes well for a film.

Nelson McCormick clearly sees himself as some specialist amid the 00s horror remake fad first with Prom Night and then The Stepfather but the disappointing news that someone needs to inform him is that he has little affinity for the genre and that his directorial moves are hackneyed and formulaic. McCormick’s generation of jumps and tension here is so frustratingly predictable – stale shots like cats jumping out into the screen, people creeping through the house as others unexpectedly pop out – that one wants to throw things at the screen. This is a film where one can predict everything that is going to happen from the outset. By contrast, the original never concerned itself with any of these cookie-cutter suspense devices. The original was also an acting tour-de-force that made the name of the then-unknown Terry O’Quinn but Dylan Walsh is no adequate replacement. While Terry O’Quinn’s mercurial changes were frightening, Dylan Walsh’s are all by the numbers.

J.S. Cardone’s script has rung up a number of changes on the original. There are a number of updatings – things are brought into the era of cellular phones, while instead of being hunted by an obsessed detective, the stepfather’s likeness now appears on America’s Most Wanted (1998– ). J.S. Cardone also brings out one issue that was a logic bugbear about the original – how does the stepfather manage to keep setting up all of these identities around the country without IRS numbers, driver’s licenses, photo ID and so on, and makes this into one of the hinges of tension in the story.

On the other hand, Cardone’s script is missing in any of the dark satire on Family Values that the original held, while all of the stepfather’s blackly funny lines have gone out the window. Where the original was relatively sparing in its body count, Cardone and McCormick have pumped up a number of supporting characters – the addition of the paranoid old lady across the street, Sela Ward’s ex/the children’s father and Paige Turco as Dylan Walsh’s employer – so as to create more opportunity to bump people off throughout.

To little purpose, the role of the teenager who becomes dissatisfied with the stepfather is now played by a guy instead of a girl. This gives the film an interestingly different central thrust where the relationship between the two turns into Dylan Walsh making bland homilies about male bonding. Turning the teenager into a guy also eliminates the creepy overtones of the stepfather trying to control his stepdaughter’s sexuality the original had, giving little frisson, for instance, to the scene where Dylan Walsh freaks out when he sees Penn Badgley kissing Amber Heard.

Moreover, Nelson McCormick has made the disastrous mistake of trying to pitch The Stepfather to the teen horror demographic. This means that the opening scene that pulls back and shows Dylan Walsh having slaughtered an entire family now comes without any blood (he presumably having poisoned them all off!) because the film has a PG-13 rating. This also means that the film is now preening to the teen audience with shots of Penn Badgley’s buffed body in swimming trunks and Amber Heard parading about in a bikini.

In placing the focus on good looking young leads, this means the troubled background that had Penn Badgley sent to military school is mentioned in all of two lines – a troubled teen with authority issues dealing with the stepfather could have been a strong source of dramatic tension but a film like this is unable make its teen hero too anti-heroic or anti-authoritarian. Unfortunately, selling The Stepfather as a teen film also means that all the undertones of dark satire of the original and its black inversion of the notion of Family Values goes completely over the head of its teen audience. Now all that we have is just another psycho film of no distinction.