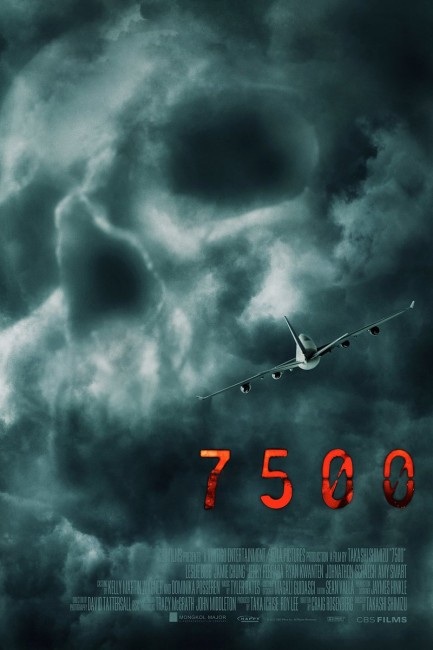 Vista Pacific Flight 7500 departs from Los Angeles bound for Tokyo. Soon into the flight, one of the passengers has a seizure and bloodily expires despite the efforts of paramedic Brad Martin to save him. Soon after, the plane undergoes a freak cabin depressurisation but the captain manages to pull them out of it. Afterwards, the passengers find that all is not right on board – the body of the dead man has disappeared, while something is moving through the plane killing passengers.

7500 was Shimizu’s third English-language film, his first original effort outside of the Grudge series. It was produced by Asian-American Roy Lee and his Vertigo Entertainment production company, which has specialised in buying up Asian films for remakes and was principally behind the spate English-language remakes of Japanese horror films that we had in the latter half of the 2000s, which included The Grudge.

With 7500, Takashi Shimizu takes on the airplane horror genre. This is something that has ‘taken off’ in recent years from non-genre thrillers like Red Eye (2005), Flightplan (2006) and Non-Stop (2014) to horror oriented ones like Tail Sting (2002), Snakes on a Plane (2006), Flight of the Living Dead: Outbreak on a Plane (2007), Quarantine 2: Terminal (2011) and Lost in the Pacific (2016). The film also has clips from Nightmare at 20,000 Feet (1963), the classic The Twilight Zone episode with William Shatner seeing a gremlin on a plane wing, screening at one point. Although what we have here, at least during its initial scenes, suggests that it is coming closest to the The Last Fright episode of the Thai anthology Phobia (2008) with a lone flight attendant terrorised by a corpse aboard the plane.

On the basis of Takashi Shimizu’s commendable work elsewhere, I came expecting that he would do amazing things with the airplane horror genre. The film certainly has an intriguing build-up and you keep watching just to find out what is going on. On the other hand, you keep waiting for Shimizu to do something astounding directorially or to introduce something of the uncanny dread he did in the Grudge films – only he never does. 7500 gets in some mild eeriness but there is nothing of note that would not have been brought to the show by a run of the mill director.

The great irritation about the deathdream twist, aside from the fact that it has become overused in recent years to the point it is well and truly time to put it out to pasture, is that all of the films require a massive amount of misdirection to convince us to look one way and become absorbed in things that are happening before pulling out the rug. 7500 gives us lots of cryptic mystery about the dead passenger having possibly been killed by a Japanese death doll, the mysterious disappearances possibly due to some type of creature on board snatching passengers, maybe the first dead passenger not being dead after all, before the twist frustratingly renders all of this build-up meaningless. What makes this even more frustrating is that once what is happened is explained, the film goes out with a final jump with something lurking in a garbage can that contradicts this explanation.