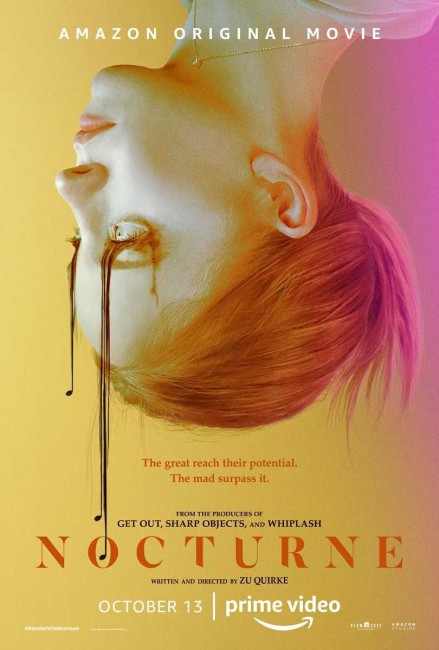 Seventeen year-old Juliet Lowe and her twin sister Vivian are both studying to be pianists at Lindbergh High School, a specialty school that teaches the arts. Vivian is seen as a prodigy and has been selected to go on to Julliard. Juliet lives in her shadow, seen as skilled but without enough to ever be more than an accompanist. Pupil Moira Wilson commits suicide on school grounds. As her locker is cleaned out, Juliet finds a dropped notebook that contains occult sketches. With Moira’s death, the delivering of the end of year performance piece is up for grabs, something that is seen as offering great opportunity to the one who plays it. Juliet enters to win the spot but at the last minute changes her performance piece to the same one as Vivian, which causes a rift between the two sisters. At the same time, Juliet sees that the sketches in Moira’s book are predicting events and giving her the power to take the top prize.

Nocturne was one of a series of four tv movies released by Blumhouse (see below for their other films) on Amazon Prime under the label ‘Welcome to Blumhouse’. The films were released two at a time, two weeks apart. The other films consist of the non-genre The Lie (2018) and Black Box (2020) released two weeks earlier, and Evil Eye (2020) and Nocturne released seven days later. Nocturne was a directorial debut for British director Zu Quirke who had previously made three short films throughout the latter half of the 2010s.

The plot of the two girls who have a rivalry at a music school is similar to the splendidly twisted The Perfection (2018), which I reviewed a couple of years ago. Both are different in a number of ways – The Perfection was very much a psychological work, while Nocturne dabbles in occult themes. Common to both is the central idea of two girls who have a rivalry against the backdrop of a highly competitive classical music school and the desire to one up the other. Around the same time as this, there was also The Sonata (2018) about a woman who finds an occult symphony.

The film comes with a great central performance from Sydney Sweeney. She has a pale, oddly blank innocence – someone describes her as a “rabbit caught in headlights” at one point and that seems a perfectly apt description. It’s a fragile performance bursting with eagerness that quite holds the show in its hand. Madison Iseman is used to playing similar characters but instead takes the role of the other sister and plays against type with quite a bitchiness. The two are said to be twins but look very different.

Zu Quirke delivers a strong and original story where she has a great tap on the characters and their driving obsessions. The film is a work of The Ambiguously Fantastic where much of the show plays out as though it is a work of horror where Sydney Sweeney finds a series of occult drawings that seem to predict things that are about to happen. On other hand, when you expect this to play in genre familiar ways – especially given that this is a production from Blumhouse who specialise in horror – the film shows that everything might only be in Sydney Sweeney’s imagination, while reaching an ending that shows two possible alternate interpretations of events.