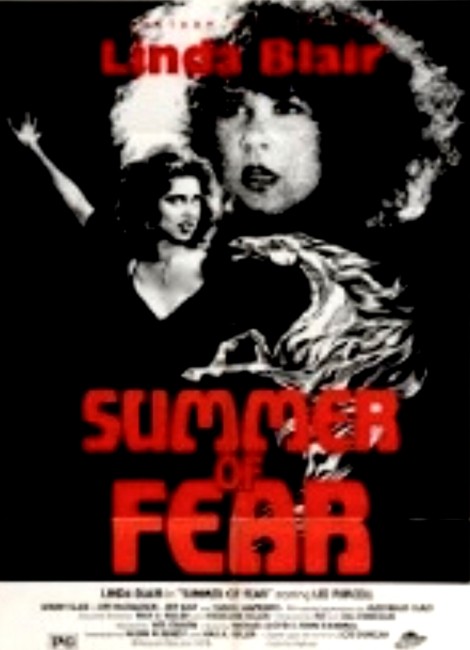 aka Stranger in Our House

Julia Trent comes to stay with her cousins the Bryant family in California following the death of her parents in a car crash. The teenage Rachel happily makes room so that Julia can share her bedroom. Rachel then comes down with a mystery case of overnight hives that prevent her from attending a dance. She sends Julia to the dance with her boyfriend Mike Gallagher in her place – only for Mike to abandon Rachel and take up with Julia. Everyone around Rachel from her parents, brother and best friend seems enchanted with Julia – all except for Rachel’s horse Sundance who rears when near Julia. Rachel finds a wax figure with Sundance’s hair among Julia’s things and soon after Sundance goes crazy and has to be put down. Rachel then comes to the conclusion that Julia is a witch and is casting spells that are seducing everyone around her.

This was the third film made by Wes Craven. It was originally a tv movie made under the title Stranger in the House but was theatrically released in Europe and some parts of the world as Summer of Fear under which name it appears to be more well known. Why it was deemed interesting enough for a theatrical release is a mystery. It is hardly likely to have been the Wes Craven name as he had only made two previous films at that point with The Last House on the Left (1972) and The Hills Have Eyes (1977), which gained him a name on the drive-in/exploitation circuit but hardly the cult figure he became a few years later with A Nightmare on Elm Street (1984). (See below for Wes Craven’s other films).

This is not a film with a huge amount of believability. The setting is the same average American nuclear household that we have in A Nightmare on Elm Street, although one where the next-door neighbour conveniently just happens to be an anthropologist specialising in witchcraft. Lee Purcell’s witch immediately starts to seduce Linda Blair’s rather dopey looking father and boyfriend – somehow one would think that witches have better things to do with their time than indulge in such trivial pursuits. There are a surprising number of similarities to the subsequent The Kiss (1988), which had fairly much the same plot about a teenager’s fears of an evil aunt who moves into the house and seduces the affections of her family away from her.

The whole film rather absurdly seems to act as a paranoid fantasy of a teenage girl’s fears of the alienation of the familiar where the ‘stranger in the house’ proceeds to steal the affections of Linda Blair’s father and brother; causes Linda to get an overnight outbreak of hives and stay home from a dance whereupon Lee Purcell steals her boyfriend – Lee Purcell even manages to wear Linda Blair’s homemade dress better than she does; casts a spell the upshot of which is that Linda’s beloved horse has to be put down; seduces Linda’s best friend (a young then unknown Fran Drescher) away from her; and even forces Linda to move out of her own bedroom. Linda Blair came to fame in The Exorcist (1973) and then floated around for a few years in teen roles. She is an underrated actress but here though seems too baby-faced to have much conviction when she gets upset.

As such, Summer of Fear/Stranger in My House adds up to a film that is too slight to take seriously (and probably even less if you were seeing in the theatres). If the middle is tediously familiar then the ending with Lee Purcell in demonic form blasting doors open is just plain silly. These scenes feature the prize absurdity of Lee Purcell wearing demonic contact lenses while cackling maniacally and trying to kill people by ramming them off the road behind the wheel of a car.