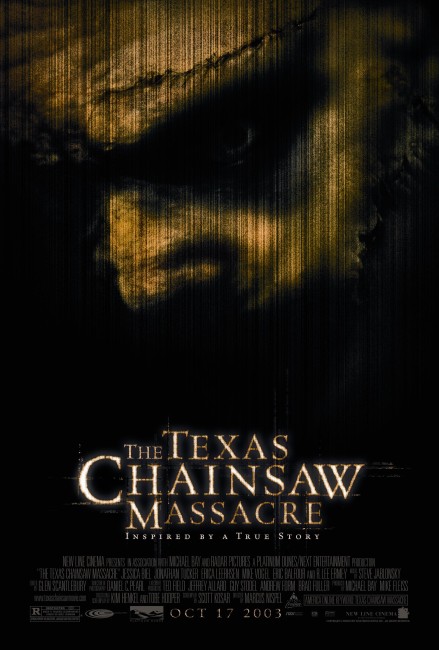 Five friends are travelling through Texas on their way back from a trip to Mexico. They stop to give a ride to a girl they find wandering dazed on the road, only for her to pull a gun and blow her brains out. Not knowing what to do with the body, they drive to the nearest town to report the incident to the sheriff and are directed to an old mill. While straying to the nearby farmhouse to make a phone call, one of the group is brutally attacked by a man wearing a mask of human skin. When the others come looking for him, the masked man pursues them wielding a chainsaw. The rest of the group are brutalized by the sinister sheriff. Erin is forced to run for her life, pursued by the leather-masked chainsaw-wielding man.

Needless to say, the idea of a big-budget remake of The Texas Chain Saw Massacre was not greeted with a great deal of enthusiasm by fans either. The name of Michael Bay was announced as director at one point (and he has a co-producer role on the finished film). The prospect of a Michael Bay-directed Texas Chainsaw Massacre caused expectations to sink. [This author has no reservation about naming Michael Bay as one of the worst directors in the world – all his films, which include the likes of The Rock (1996), Armageddon (1998), Pearl Harbor (2001), The Island (2005) and Transformers (2007) are loud, noisy action bombast, conducted without the slightest concept of subtlety]. However, in one of the most astute creative decisions he ever made, Bay turned the direction of The Texas Chainsaw Massacre over to then unknown music video director Marcus Nispel.

It is a very different Texas Chainsaw Massacre that we now have. As both Elvis and the Rolling Stones found out, one generation’s outrage turns into the next generation’s conservative establishment. The Texas Chain Saw Massacre 74 was an independent tax-shelter financed production that shocked audiences with its rawness and brutality; thirty years later and it has become just another recognizable title that is being excavated because of its brand name familiarity. There seems a crucial misunderstanding here in the way the film has been revived. The effectiveness of the original Texas Chain Saw Massacre was its brutal in-the-face assault upon an audience and its shocking eschewal of horror convention; the prospect of a studio-financed remake where its rawness comes filtered through reasonably budgeted polish, with familiar actors playing the parts and MPAA censorship approval seemed dismal.

I sat down to watch Texas Chainsaw Massacre 2003 with critical knives poised to hack into its wholly unnecessary presence. What I least expected was that it was halfway watchable and by no means bad. In fact, it surprises one to hear themself say it, but Texas Chainsaw Massacre 2003 is a model of how all remakes should be conducted. Scott Kosar’s screenplay treads the same path as the original but throws in enough variations on expectation that one ends up being caught offguard. Kosar evens out and strengthens many elements from the original – we learn why Leatherface is driven to hide his face behind a mask (in one remarkable image, we even see him sewing the mask together using an antique treadle sewing machine); Kosar dispenses with the flimsy reason of visiting the family home that has the group crossing the Texas backwaters – here they are returning from Mexico with two pounds of weed.

The remake also maintains the fiction that the original has been was based on a true story – the poster bears the legend “Inspired by a True Story” while the end credits inform us “this motion picture was inspired by actual events”, whereas in fact the true life story of Ed Gein that inspired the original film is so slim in terms of connection that the film might be better off crediting Norman Bates as a source of inspiration.

Scott Kosar does change the nature of the cannibal family and gives us a number of other characters around the edge of the film – Terrence Evans as a flinty paraplegic in a wheelchair; Marietta Marich as an unsettling general store proprietor who may or may not be selling human meat; David Dorfman as a feral wild child; an extremely overweight mother (Kathy Lamkin) who lives in a trailer in the woods and looks like she has just stepped out of What’s Eating Gilbert Grape? (1993); and the intriguingly named Heather Kafka as Lamkin’s frail, neurasthenic, clearly in-bred daughter. The most noticeable change is the replacement of Jim Siedow’s Cook with a very sinister sheriff played by R. Lee Ermey.

If Texas Chain Saw Massacre 74 offered a vision of Texas where the backroads of the state seemed to be lurking with psychopathic hicks, then Texas Chainsaw Massacre 2003 blows that up to a hyper-realized extent – after watching the film, you might not be mistaken in believing that the entire state of Texas was inhabited by in-breds, trailer park trash, grotesquely overweight people and that all law enforcement there was corrupt and evil. In the latter regard, R. Lee Ermey’s sheriff has been ludicrously made up to the point that he looks almost Cro-Magnon and Ermey given his head and allowed to give an astonishingly over-the-top performance – his character is allowed to dominate the film so much that he even overshadows Leatherface. Robert Burns’ memorable charnel house set dressings from the original have also been disappointingly cleaned up.

The characters of the victims have also been changed from the original – eliminated entirely has been the character of Paul Partain’s crippled brother Franklin. As the lead victim, Jessica Biel gives a strong and intelligent performance – much better than Marilyn Burns in the original, even if Biel does not do much more in the film than run around screaming. Certainly, Erin is far less of a victim than Marilyn Burns’s Sally Hardesty was in the original. This is particularly noticeable when it comes to the climax, which Marcus Nispel and Scott Kosar fumble somewhat, allowing Jessica Biel to make a much more traditionally upbeat getaway. This is much weaker in comparison to the original, which had a traumatized Marilyn Burns getting away by the skin of her teeth with a passing truck driver while Leatherface stood on the side of the highway mutely waving a chainsaw in frustration. Making Erin/Sally into a much more empowered heroine fails to leave audiences going out so traumatized and waters down the effectiveness of the nightmare.

The most unique twist on the original that the remake offers is the opening where Edwin Neal’s hitcher has been replaced by Lauren German’s shell-shocked escapee. The sex change gives the film a unique frisson of the unexpected – one that much more neatly ties the hitcher to the events to come – she is someone who has escaped and their venture into the house of horrors is simply their attempting to report the crime to the sheriff. Marcus Nispel puts a jolting twist on the hitcher scene – where in the original Edwin Neal simply went crazy in the back of the van, set a fire and stabbed Paul Partain, Nispel has Lauren German’s hitcher pull a gun (which she improbably seems to have hidden somewhere in her mini-skirt), put it in her mouth and pull the trigger. It is a scene that immediately jolts anyone familiar with the original out of expectation. Nispel ends the scene by staging a wonderfully showoffy shot that pulls back through the bullet hole in her head and then the shattered glass hole in the window behind her as the van departs down the road. It immediately announces that Marcus Nispel is making a film worth sitting up and paying attention to.

In an era where horror has become taken over by the watered-down concept of the teen horror film – Urban Legend (1998), Final Destination (2000), Valentine (2001) et al – The Texas Chainsaw Massacre is noteworthy as one film that gets down and delivers the gory goods. You can almost guarantee that The Texas Chainsaw Massacre was pitched to its studio as a teen horror film and cast with moderately known up-and-coming young faces – Jessica Biel from Seventh Heaven (1996-2007), Eric Balfour, Jonathan Tucker, Erica Leerhsen. One irksome aspect of this new version is that the teenagers are simply modern teenagers – the girls dress in modern hipster jeans, which belies the supposed 1973 setting that the film claims. In fact, there is very little in the film that ever gives the impression it is taking place in 1973, not 2003.

It is unlikely that this Texas Chainsaw Massacre is ever going to send grown audiences screaming from the theatre white-faced and ashen or even be banned in a host of countries internationally. This Texas Chainsaw Massacre is a film that noticeably lacks the rough edges, the LSD-trip-without-the-acid quality of the original and toes the MPAA line the whole way. Perhaps financing of the film has dictated that it be cast with recognizable up-and-coming young faces, although Marcus Nispel does throw a few jolts on expectation here in that it is not the most recognizable faces that end up surviving. This Texas Chainsaw Massacre is certainly far more unstintingly gory than the original, where Tobe Hooper never showed any blood at all. Here we get to see legs and arms cut off with chainsaws and Nispel has extended the scene where one character gets impaled on a meathook, he now having them attempting to drag themselves free. The scene where Leatherface suddenly appears from behind a door and bangs one character over the head with a sledgehammer still holds an unexpected jolt. Nispel also borrows from The Texas Chainsaw Massacre 2 the image of Leatherface sewing on the heroine’s boyfriend’s face. The background of the sets is always offering up an array of perpetually grisly imagery – racks of severed fingers, jars of eyeballs.

Director Marcus Nispel subsequently went onto make a modernized tv mini-series remake of Frankenstein (2004); Pathfinder (2007), a brutal and bloody historical film about the meeting between Vikings and American Indians; the remake of Friday the 13th (2009); the big screen revival of Conan the Barbarian (2011); and Backmask/The Asylum/Exeter (2015).

Michael Bay’s Platinum Dunes production company went onto produce a substantial number of other horror remakes, including the abovementioned The Amityville Horror, The Hitcher, Friday the 13th and A Nightmare on Elm Street, as well as Teenage Mutant Ninja Turtles (2014). Platinum Dunes have also branched out into original genre films like Horsemen (2009), The Unborn (2009), The Purge (2013), Ouija (2014), Project Almanac (2015), A Quiet Place (2018) and the tv series The Last Ship (2014-8).