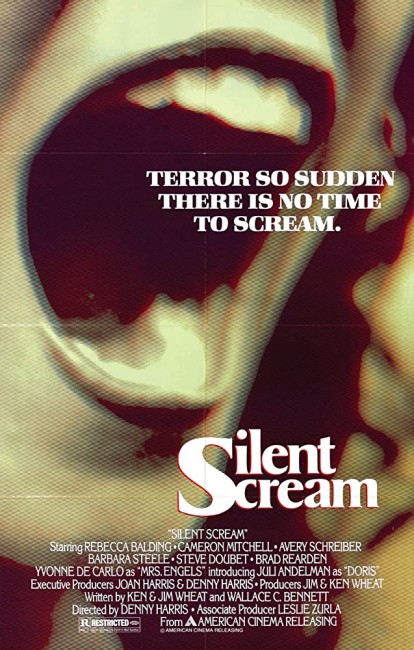 Scotty Parker enrols at university late and as a result is unable to find a place in a dormitory. Eventually she finds a room in a large, old seaside mansion boarding house run by teenager Mason Engels and his reclusive mother. Someone then starts killing the other students at the house. Scotty starts to uncover the Engels’ family’s twisted background and meets the crazed sister Virginia whom they keep locked away in the cellar.

The Silent Scream was made just when the slasher film cycle was kicking into gear with the twin success of Halloween (1978) and Friday the 13th (1980). The Silent Scream seems to be a horror film that is caught between two cycles – on one hand, it is a combination of the leftovers from the Old Dark House genre with its family secrets in the cellar of a big old mansion (and a little of the What Ever Happened to Baby Jane? (1962) sub-genre of aging actresses going around the bend) and of the modern slasher film, setting up a group of faceless teen victims to be dispatched.

As it goes, The Silent Scream has moments of effectiveness and several flashes of style that stand it above the thorough dross that constitutes the bulk of the slasher cycle. There is one subtly effective shot on a beach after one victim is attacked where the camera lingers and it takes a moment before one realizes that the sandcastle in the foreground has a bloody hand emerging from it; or the scene where Rebecca Balding is being gagged on one side of a wall while boyfriend Steve Doubet searches for her on the other side and she struggles to try and pull a cord and knock a record player over to alert him.

Barbara Steele, the wide-eyed actress who became a cult figure as a result of the Italian Gothic cycle of the 1960s beginnings with Black Sunday (1960), makes a welcome return to the genre for the first time in several years and proves on fine form. There are appearances from other genre regulars like Cameron Mitchell and Yvonne de Carlo. While not pretending that The Silent Scream is a great film, it is made with a reasonable degree of competence.