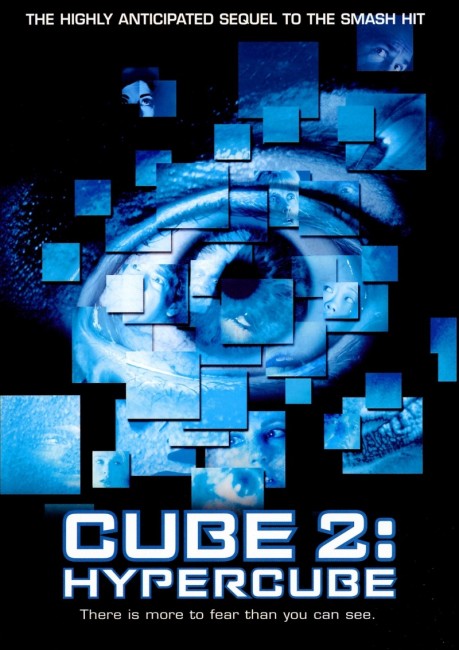 A group of diverse people – psychologist Kate Beaumont, private investigator Sam Grady, the blind Sasha, computer game designer Max Reisling, engineer Jerry Whitehall, the aging Mrs Pailey, the lawyer Julia and military colonel Thomas Maguire – find themselves inside a labyrinth. Every room is a cube that has a door on each of its faces that opens into another identical room. As they puzzle over what they are doing there and try to find a way out, they realize that they are trapped inside a tesseract – a cube that has been built in four dimensions. Due to the hyper-dimensionality of the cube, they find rooms where gravity works in different ways, where time operates at different speeds and even encounter themselves in alternate timelines or at different points in time. However, the cube is also unstable and starting to collapse in on itself.

The low-budget Canadian science-fiction film Cube (1997) was a big international arthouse hit. This was the first of two sequels. This time all the essential creative personnel behind the original are absent. The director’s chair has been handed over to Andrzej Sekula. Sekula had only directed one other film before this, the B movie Voodoo Dawn/Fait Accompli (2000), and is best known in the industry as a cinematographer, having lensed most of Quentin Tarantino’s films, including Reservoir Dogs (1992), Pulp Fiction (1994) and Four Rooms (1995), as well as other high-profile films like Hackers (1995) and American Psycho (2000).

CubeCube2: Hypercube is certainly a film that does what all sequels should – it expands out on the ideas of its predecessor. In this case, it does so literally. As one might notice, the title is Cube2 as opposed to Cube 2. This has multiple meanings that go beyond the clever play on the two becoming a ‘to the power of two’. It is also a play on geometric names – in mathematical terms a ‘cube squared’ is a tesseract, a cube that has been extended multi-dimensionally.

The original film was a beautiful puzzle-box of a story in which various individuals find themselves in a labyrinth where they must combine their mutual talents to find the underlying mathematical rationale that will allow them to exit to freedom. There was also a wonderful economy to the first film in that it only took place on a single set – only one cube was ever built for the film, which was then lit in different ways to represent different rooms.

While not varying from the one room redressed concept, Cube2: Hypercube places a few spins on that idea. The hyper-dimensionality allows the scriptwriters to play around with some fascinating ideas. Gravity operates at a different angle in some rooms; time operates at a different pace in other rooms so that observers see other people alternately sped up or slowed down; while elsewhere doors opens up into alternate realities and points in time so that they are constantly meeting different versions of themselves.

In one fascinating scene, the dithering Barbara Gordon opens a door, only to see herself there. As she reaches out to grasp her own hand, Geraint Wyn Davies appears from behind to stab her, yelling out “Don’t trust the old cunt – she lies about everything,” before he is wiped out by a wall of crystalline shapes. It is a compulsively fascinating moment that suddenly stops the film in stunned silence.

In another scene, Kari Matchett stabs Geraint Wyn Davies in the eye, only to then turn around and encounter him on the other side of the room a moment later, he having aged some fifteen years and come seeking revenge for the stabbing. The sequel also adds an element of menace that was not present in the original – the blind girl giving ominous warnings throughout that something bad is about to happen and with the sense that some thing or force is hunting them through the labyrinth.

On the other hand, Cube2: Hypercube is somewhat more gimmicky and certainly less conceptually neat than the first Cube was. There are a number of fascinatingly weird happenings and these are eventually given an explanation – alas, not one that comes with the beautiful sense of a puzzle falling into place that we saw in the first film. The disparity can clearly be seen in comparing the story structure of the two – the first film has the logic of a detective story unfolding, whereas Cube2 is merely a flight through a collapsing labyrinth. In the first film, the characters were chosen to come together for a particular purpose; this film certainly gives us a similar cross-section of different characters but there is no sense of their being chosen with a purpose, while most of them are disappointingly killed off fairly soon into the show anyway.

The last third of the film feels hurried in terms of wrapping up explanations. While Cube deliberately left explanations and origins of the cube unsaid, Cube2: Hypercube attempts to give us explanations. Alas, they do not quite fit. While they serve perfectly well for this particular set of characters, they fail to work as explanations for the first Cube. (Although, they do amusingly buy into the very same belief in military conspiracies that the original made satirical jibes at).

For a time, Cube2 seems to be a sequel that explores new ideas and concepts, but eventually it only emerges as a sequel that goes three-quarters of the distance, before ending on a clichéd downer of a conspiracy wrap-up, while letting much of the conceptual pleasure of the first film go amiss.

Also disappointing is that Cube2: Hypercube turns out to be yet another Canadian-made film that pretends that it is set in the USA, as many Canadian films do in order to sell themselves internationally. Cube was such a success that this surely has no need to pretend that it is an American film in order to sell itself.

Cube Zero (2004) was a further sequel, directed by this film’s writer/producer Ernie Barbarash.