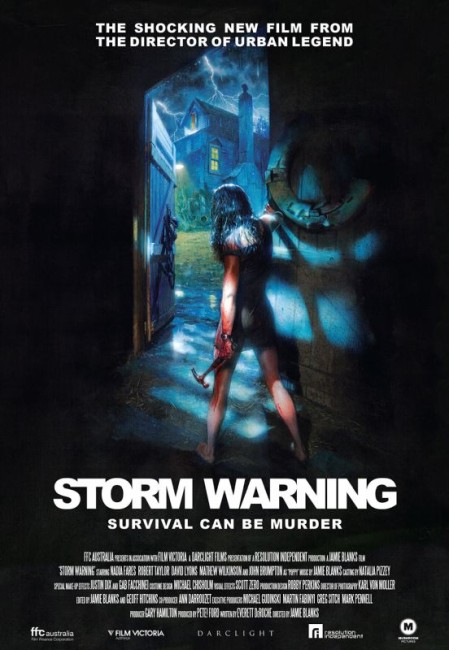 Barrister Rob Brower and his French wife Pia drive to the coast and hire a small boat to go sailing for the day. However, as night falls, they become lost. Landing on shore, they seek refuge as it begins to rain and come to a dilapidated farmhouse. Nobody is home and as they search, Rob realises that the owners are marijuana growers. The owners return – Poppy and his two sons, the psychotic Jimmy and the backwards Brett. Rob and Pia find the family’s uncouth ways disconcerting. Their clothes are stolen while they are showering and the sons then proceed to taunt, threaten and humiliate them. As the family’s intentions gravitate towards raping Pia, they try to escape but are made prisoners.

One of the biggest hits among these was the Australian Wolf Creek (2005), which attained a high international profile. Storm Warning is another Australian-made Backwoods Brutality effort. It comes from Jamie Blanks who had had some success on the international stage as director of slasher films like Urban Legend (1998) and Valentine (2001), as well as the subsequent remake of Long Weekend (2008) . Everett DeRoche is a veteran genre screenwriter who has written a number of classic Australian horror films including both the original Long Weekend (1978) and Blanks’s remake, Patrick (1978), Harlequin (1980), Roadgames (1981), Razorback (1984), Visitors (2003) and Nine Miles Down (2009).

Storm Warning is a Backwoods Brutality film by the numbers. There is nothing here that has not been covered by any other film in the cycle – the city slickers that stray into a backwoods locale, the degenerate hick family that live there (indeed, the two sons remind strongly of the psychotic brothers that turned up in the Everett DeRoche written Razorback), the family’s filthy junk-littered house, the constant humiliation and sexual degradation of the city folks, culminating in them being imprisoned and hunted before being forced to fight back with their bare hands.

Like the hicks in Straw Dogs and Death Weekend/The House By the Lake (1976), the backwoods family seem to have outright contempt for the more sophisticated ways of the city slickers. They delight in calling Robert Taylor “Volvo,” making Nadia Fares act as cook, show her ass and then slaughter a wallaby. When it gets to the inevitable point of fighting back, things take a turn for the brutal and extremely bloody – Mathew Wilkinson strung up in a maze of fishing lines and then battered to death with a hammer; the father (John Brumpton) having a broken bottle impaled on his dick when he tries to have his way with Nadia Fares and being forced to tear it off with a pair of pliers; and David Lyons despatched by being shoved into the fan of a swamp boat.

There has been nothing standout about any of Jamie Blanks’ films to date. The disappointment about Storm Warning is that Jamie Blanks only serves up serial brutality, there is no sense that the film is attempting to dig any deeper than this. Films like The Last House on the Left and The Texas Chain Saw Massacre were emotionally raw; here there is only the sense that the brutalities are part of a series of novelty gore effects being put on like gleeful shock exhibits.

One major plus about Storm Warning is some stunning outdoor location photography during the early scenes with Robert Taylor and Nadia Fares at sea – they in a tiny boat on an ocean of grey surrounded by sky and sea above, the storm clouds gathering, they drifting down the canals and through the reeds to land. Jamie Blanks also composes the film’s score, which lurks over the early scenes with wonderful threat.