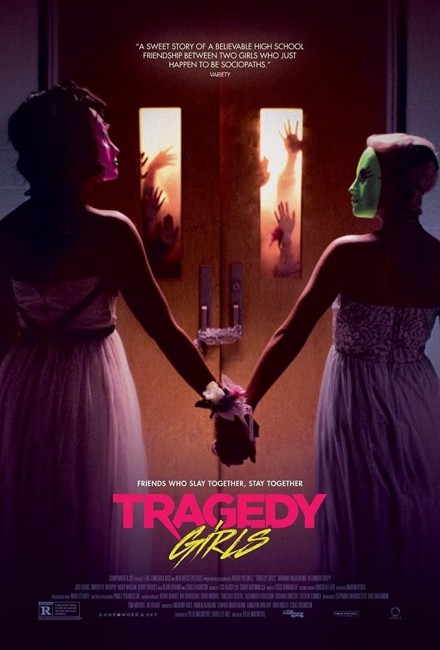 Sadie Cunningham and McKayla Cooper are best friends and students at Rosedale High. They run a true crime blog called Tragedy Girls and are fascinated by a killer stalking the area. Sadie goes making out with boys in cars as a lure and they are thus able to capture the masked serial killer, Lowell Lehman. They then imprison Lowell and demand to learn his methods. They are disappointed to find that their posts are dwindling in reach and the sheriff will not accept evidence of the killer’s crimes. When McKayla’s ex Toby Mitchell gets more tweets than them, they decide that he must be eliminated. However, when the sheriff dismisses his death as an accident, Sadie and McKayla are driven to further murders, determined to manufacture evidence for there being a killer.

Tragedy Girls was the second film from Tyler MacIntyre who had previously made the horror film Patchwork (2015). Both films centre around teen girls and come in a Horror Comedy vein.

In conception, Tragedy Girls feels like a teen comedy crossed over with a slasher film – maybe a remake of Happy Birthday to Me (1981) by way of Mean Girls (2004). Or perhaps even more appropriately a film like Heathers (1988) having been given just that one twist further it needed to fully go over into being a horror film. The body count and business of the slasher film is amusingly contrasted with the visual snappiness of the modern teen film. The scenes of Brianna Hildebrand and Alexandra Shipp hacking up bodies sit alongside the bippy visuals of a high school tv show – very physical scene transitions, text messages in colourful font popping up onto the screen, interspersed social media snippets, lots of primary colours in the design scheme.

The script feels like a standard teen comedy written with a dark underbite – the girls are seeking to boost the popularity of their blog and begin eliminating others who steal their limelight or get more tweets than they do. One of the ongoing gags for much of the film is that they are trying to create evidence of a serial killer (while having the real masked maniac tied up in a barn) but all of their efforts are dismissed by authorities and passed off as road accidents and the like.

There is a constant wit and snappy cleverness in the reversals of direction to the script. The script comes with a witty genre savvy, including Jack Quaid as a horror fan who is constantly voicing appreciation for films like Martyrs (2008) or mentions the works of Dario Argento to a confused Alexandra Shipp – “Dario Arpeggio?”. A scene where Savannah Jayde is killed in a freak workshop accident is dismissed as “That’s some real Final Destination shit.” Added to this are the undeniably amusing scenes with the two girls trying to eliminate Craig Robinson (who also produces the film), who seems about two sizes bigger than they are, and for things to go disastrously wrong.

The film has a reasonable cast line-up of recognisable faces. Alexandra Shipp, previously Storm in X-Men: Apocalypse (2016), was a relatively new face to me. Brianna Hildeband previously did a rather funny turn as Negasonic Teenage Warhead in Deadpool (2016) and sequel. Here she seems a little miscast. Reading up on Hildebrand, she identifies as being into both girls and guys but the look she opts for is of shaven or close cropped hair, which has for rightly or wrongly, been pegged as gender-neutral look. The role she gets making out with boys is one that seems to have been written for a more classically girly girl type but casting a gender neutral girl throws the part off somewhat. Also the film is shot in a way that does not show Hildebrand’s 5’3” height off to its advantage – on screen, she looks more like 5’1” and so physically slender that when she goes into action fighting much bigger guys, you wonder why they just don’t pick up and toss her aside.