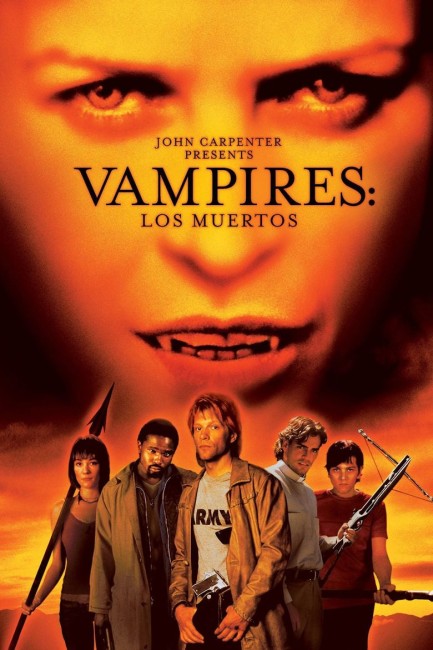 The vampire hunter Derek Bliss receives an assignment from a mysterious client to unite a team of vampire hunters in northern Mexico. However, as he travels to find members for his team, Bliss finds that someone has gotten there ahead of him and is slaughtering all his potential recruits. He eventually assembles a ragtag team consisting of a young Mexican kid Sancho; Zoey, a girl who has been infected with the vampire bite but has found a mysterious supply of drugs that contain it; Father Rodrigo, the only survivor of a Catholic mission whose members have all been slaughtered by vampires; and Ray Collins, a streetwise mercenary from Memphis. Together the team travel to the Mexican village where the vampire Uma is attempting to find a means of being able to walk in daylight again.

John Carpenter’s Vampires (1998) was a modest hit, if one that is regarded unevenly by fans. Vampires: Los Muertos is a sequel. Vampires: Los Muertos is produced by Carpenter’s Storm King production company where Carpenter has turned directing-writing chores over to Tommy Lee Wallace, his former editor and production designer on films such as Halloween (1978) and The Fog (1980). Tommy Lee Wallace became a director on the Carpenter-produced Halloween III: Season of the Witch (1982) and within the horror genre made one other previous vampire film sequel Fright Night Part 2 (1989), as well as directed the Stephen King tv mini-series It (1990).

Vampires was a slick and effective vampire film. Alas, the same cannot be said for Vampires: Los Muertos. On both Halloween III and Fright Night Part 2, Tommy Lee Wallace demonstrated a reasonable degree of style, even though he was working in the throwaway genre of the sequel. However, by the time of Vampires: Los Muertos one wonders where all that style has gone.

There are scenes that might have worked had Vampires: Los Muertos been accorded a better budget – there is an intriguing opening where Jon Bon Jovi pulls up a man threatening a hooker with a gun, she thanks him, only for him to then turn and shoot her with a staked gun revealing that what we thought was a rape was a female vampire attacking a victim. If this had been directed with a little more style, it would have made a great punchy opening; as it is it only seems B-budgeted and cheap. Wallace does direct a stylish slow-motion sequence where the vampires slaughter everybody in a cafe in the time it takes Jon Bon Jovi to throw a tissue in the waste can in the men’s room, but it collapses into abject pretensions in the surroundings. Even the effects work from the normally top-drawer Hollywood makeup studio K.N.B. EFX Group looks tatty and cheap.

Nothing in Vampires: Los Muertos works. Tommy Lee Wallace’s script is roughly slung together and filled with loose ends. There are gaping holes – the film leaves one asking questions such as where the vampiric antidote that Natasha Wagner’s character uses comes from, something that appears out of nowhere without explanation. Much of the film involves Jon Bon Jovi assembling a team of vampire hunters for a mysterious client but even after the client’s identity is revealed there is not the slightest clue given as to why they hired him in the first place or why the client is going around killing off all the potential recruits before he can get there. Other plot elements – the quest for the anti-crucifix that can allow the vampire to walk in daylight again, the vampire hunter using the aid of a girl who is half-vampire – have been blatantly lifted from the first film. Even the Mexican setting seems to have been borrowed in a direct nod to From Dusk Till Dawn (1996) and sequels.

The hero of the piece is played by Jon Bon Jovi, the former lead singer of the 1980s big hair rock group Bon Jovi. Since the demise of the group, Bon Jovi has been carving a modest acting career for himself with parts in films such as U-571 (2000) and Cry Wolf (2005) and a recurring role in tv’s Ally McBeal (1997-2002). One is dubious about the leonine Bon Jovi’s acting abilities – he seems more handsome pretty boy than actor – but here at least projects an inner calm and purpose that is modestly effective.

Vampires: The Turning (2005) was a further sequel.