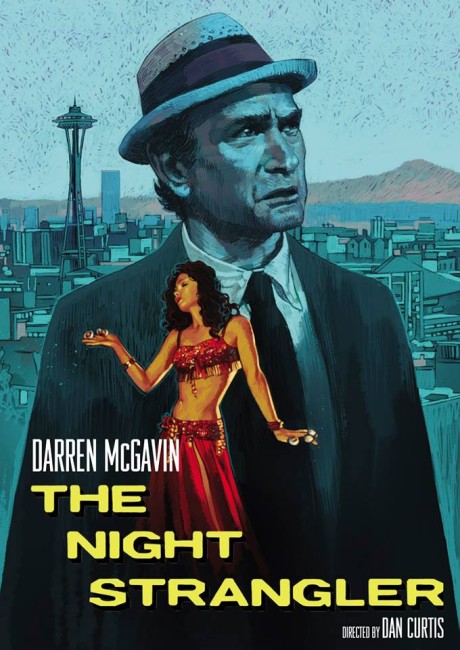 Tony Vincenzo is now working as an editor on The Daily Chronicle in Seattle. He comes across a down-and-out Carl Kolchak in a bar, still talking about his encounter with a vampire, and makes the decision to hire him. Kolchak’s first assignment is covering the strangling of a belly dancer. Kolchak begins to suspect something more after he comes across a second similar murder. The coroner reports that a small amount of blood has been taken from each girl and dead flesh has been found around both victims’ necks. Digging into the records, Kolchak discovers that a spate of identical stranglings has happened every twenty-one years all the way back to 1868. Every twenty-one years, the killer seems to reappear to kill six women over a period of sixteen days and always with the same trademark of blood taken and dead flesh left around the neck. Kolchak is faced with the fantastical possibility of a killer who is 144 years old. Vincenzo and the authorities ridicule this idea. Kolchak investigates on his own, venturing down into the underworld beneath Seattle in search of a mysterious doctor who has discovered a serum of youth.

For at least its first half, The Night Strangler starts in as a virtual repeat of The Night Stalker – Darren McGavin’s Kolchak investigates the murders of a series of girls (there is even the same opening scene with a girl on the streets being grabbed by a lurker in the shadows), comes up with anomalies that the police dismiss, fights to get the story out when city hall and the authorities want it quashed, argues with his editor who accuses him of wild rumour-mongering. The Night Strangler, and in particular the subsequent tv series, does stretch credibility somewhat by keeping having Darren McGavin, an unemployed (and from the looks of it unemployable) journalist, managing to uncover some type of supernatural and/or fantastical happening on a weekly basis when most people in the regular course of events do not even encounter a single one in their lifetime.

The Night Stalker is the most famous of the two films but almost all fans agree that The Night Strangler is the superior of the two. It works far better as a story and, during the venture into the Seattle Underground, far better in terms of atmosphere. One always felt that the great failing of The Night Stalker was that Barry Atwater’s vampire was essentially faceless – he was never given any dialogue and did nothing except snarl. This is remedied here.

The nemesis of the immortal doctor is played by Richard Anderson, who was shortly after to become famous as Oscar Goldman on tv’s The Six Million Dollar Man (1973-8) and The Bionic Woman (1976-8), who gives a decent performance, while Richard Matheson writes a fine soliloquy explaining the doctor’s existence and purpose. These scenes fall down slightly when the film feels the need to throw in a cliched climax where the formula is destroyed and all of Richard Anderson’s age catches up with him and he crumbles to dust.

The most fascinating thing about The Night Strangler has been the decision to incorporate Seattle’s real-life Underground as a location. This is a genuine site where, following a huge fire in 1889, the city council ordered the building of another entire street level (the present-day one) over the top of the old buildings rather than raze them. Many of these old buildings still exist and have been restored as tourist attractions where guides give lurid exploits of what used to happen. We briefly get to visit some of the Seattle Underground but mostly the film has created its own fictional soundstage version of it.

The world created is a small masterpiece of production design – one that seems a petrified three-dimensional snapshot of another era. Production designer Trevor Williams has seemingly used an entire soundstage and created a replication of a 19th Century street with three-tiered buildings that are seen stretching up into the scaffolding of the city above; endless stairs, even old-fashioned elevators travelling to the upper levels of the present-day world; steam continually billowing up from beneath the cobbled pavement; drawing rooms of lush scarlet drapes covered in cobwebs; corpses sitting at tables but where the food is recent and candles are lit. It is a stunning world of the imagination that the film creates here.

By now, Darren McGavin has the hard-headed cockiness of the role down pat – he and Simon Oakland have a ball playing off one another. McGavin is truly in his element and confirms the role of Kolchak as his own. The film features some amusing cameos, including John Carradine as a peppery newspaper owner; Margaret Hamilton, alias the Wicked Witch of the West in The Wizard of Oz (1939), as a haughty academic; and Al Lewis, Grandpa Lewis of tv’s The Munsters (1964-6), as a derelict living in the Underground.