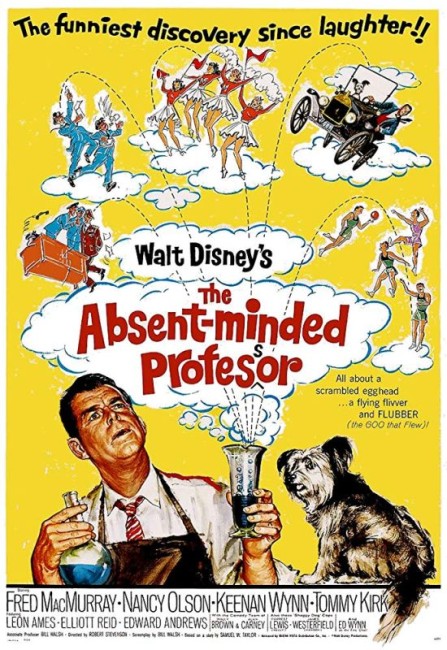 Medfield College chemistry professor Ned Brainard is so absent-minded he even forgets to turn up for his own wedding. After a laboratory explosion, Ned finds that he has accidentally created a rubbery substance that defies gravity. Nicknaming it ‘flubber’ – for flying rubber – he sets out to use it to win back his fiancee Betsy whose attentions have been caught by a pompous rival. He also attempts to help the despondent and unsuccessful Medfield basketball team win and stop the ruthless Alonzo Hawk from foreclosing on the college.

This Disney film is an inspired delight. It was a huge success and became the template for the formula for a string of Disney comedies through the 1960s and 70s. Fred MacMurray, Keenan Wynn and in particular Tommy Kirk became regular players in these subsequent films. However, none of these ever fully rediscovered the delights that The Absent-Minded Professor has.

The Absent-Minded Professor has immense charm. It even has a wonderfully absurd visual poetry in its scenes of a Model T performing aerobic loops in mid-air and (literally) driving off into the sunset at the end. The scenes with a basketball team madly leaping over the heads of their opponents or the attempts to stop an uncontrollably bouncing Keenan Wynn have a genuinely madcap inventivity about them. There are many of the typical inanities of Disney live-action comedy – slapstick car chases, buffoonish authority figures – but in this, the film that set that formula, it is welded into a charming and effortless whole. The effects work is excellent – the only effects that do not work are the plainly cartoon-animated bouncing balls of flubber.

Even the script is reasonably believable, the technical explanation for flubber having a surface plausibility that at least seems more conceivable than the usual gobbledygook inserted in lieu in science-fiction films. (Unfortunately, it is done in by one glaring error – that flubber would fail through the Second Law of Thermodynamics, that increased action creates a gradual loss, as opposed to increase, of energy as the film claims).

The Absent-Minded Professor became the template for a series of Disney madcap (as opposed to mad) scientist films through the 1960s. (Indeed, you could argue that The Absent-Minded Professor was the film that rescued the scientist’s reputation and transformed him into a lovable eccentric rather than the madman defying the laws of nature as he was constantly being portrayed in the 1930s and 40s). Other Disney imitators include the Merlin Jones films – The Misadventures of Merlin Jones (1963) and The Monkey’s Uncle (1965) – and the Dexter Reilly films – The Computer Wore Tennis Shoes (1969), Now You See Him, Now You Don’t (1972) and The Strongest Man in the World (1975). Medfield College became a regular venue in Disney’s live-action comedies and Keenan Wynn played Alonzo Hawk again in Son of Flubber (1963) and Herbie Rides Again (1974).

Disney made a disappointing sequel – Son of Flubber (1963), which also featured all the principals here. There have been two mediocre remakes – the tv movie The Absent-Minded Professor (1994), starring Harry Andrews in the title role, and the cinematically released Flubber (1997) with Robin Williams.