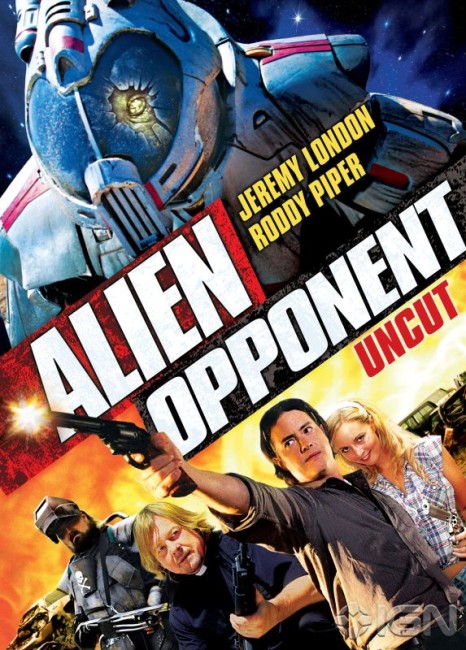 Tom Mazurski, the tycoon who owns much of a small hick town, finds his daughter Meghan having sex with the thick-witted handyman Braden James out the back of his junkyard workshop. As Tom tries to pull them apart, his wife Rita bashes the back of his head in with a hammer. She and Meghan then debate what to do with the body so they can claim his money for themselves. Just then an alien ship comes down in the junkyard and the inhabitant puts up a forcefield around the workshop. Rita decides to use this as an opportunity to cover up Tom’s death and goes on tv to advertise that they are setting up an open hunt on the alien with a $100,000 reward for whoever retrieves Tom’s body. This brings all and sundry seeking to win the prize money. Locked inside the junkyard gates, they must not only deal with the heavily armoured alien and the death-traps it has set but also the vicious in-fighting as the hunters seek to eliminate the competition amongst their own numbers.

Alien Opponent was the second film from Colin Theys, an American genre director on the rise through the low-budget ranks. Theys had previously made Banshee (2008) and went onto Remains (2011), Dead Souls (2012), Dark Haul (2014), Deep in the Darkness (2014), The Murder Pact (2015) and Stalker’s Prey (2017). Connecticut-based Synthetic Cinema International is clearly a rising low-budget production company and Colin Theys and other principals on the credits have been behind a number of other genre films with the likes of Predator Island (2005), Blood Descendants (2007), Werewolf: The Devil’s Hound (2007), Sasquatch Assault (2009), Remains: Road to Reno (2011), Chilling Visions: 5 Senses of Fear (2013) and Animal (2014).

Alien Opponent has been built out around a fairly simple premise – a bunch of stupid and/or greedy hick characters are imprisoned in a junkyard with reward money announced for whoever retrieves the body at the same time as they are hunted and their numbers eliminated a lethal-looking alien creature. (In fact, it seems a surprise that there is not some kind of reality tv show or at least videogame that has been built out around such a premise). It is sort of Predator (1987) by way of Tucker and Dale vs Evil (2010) if you like.

Alien Opponent never goes as far or as cleverly as Tucker and Dale did in making its hick characters endearing or even turns the cliches on their heads; it just wants to mock and have fun with their stupidity. This quickly becomes tiring because the film never seems to have any other gags in its arsenal – more than fifteen minutes of humour centred around stupid and hick characters start to become tedious. Not to mention that the film fails to find anything that is particularly funny to offer up in all of its running time. The alien and robot designs are very so-so and only look cheap. There is a fairly random sense to the film where the alien’s self-defence methods at various points involve a killer shark prowling through the junkyard and one of the hillbillies resurrected as a zombie.

The film’s biggest name is buzzsaw-voiced former wrestler Roddy Piper who had a minor acting career of sorts in films like Hell Comes to Frogtown (1987) and They Live (1988). Piper is cast as a priest – a role that he is about as far removed from in personality as it is possible to get. The only other recognisable name is Jeremy London who gives the impression that he only turned up to collect his paycheque and spent the whole of the film literally on the sidelines doing nothing. The only member of the cast who emerges as anything more than a one-note caricature is Adrienne LaValley playing an amusingly kickass character who has clearly been modelled on Lara Croft.