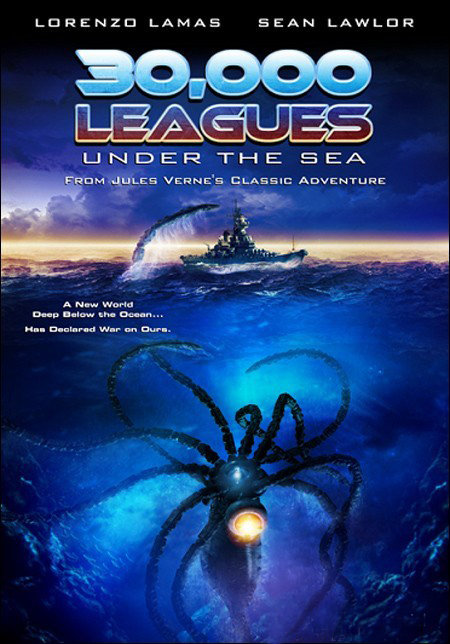 The nuclear submarine USS Scotia goes down in the Marianas Trench. Lieutenant Michael Arronax and his team are reassigned to go and rescue the Scotia in the submersible Aquanaut 3 using Arronax’s invention of The Oxygenator, which projects a large bubble of air. However, as they head down into the depths, the submersible is attacked by giant squid. They come around aboard another submarine and are introduced to its designer Captain Nemo. Nemo is a great inventor and has designed his submarine The Nautilus as a floating city of many technological marvels. He wants to employ The Oxygenator to explore the lost city he has discovered on the ocean floor, which may be Atlantis. When Arronax and the others try to depart, Nemo forcibly brings them back and subjects the crew to his mind-programming device. They then discover Nemo’s plan to annihilate the surface world using the nuclear warheads taken from the captured navy submarines and to relocate his people in the lost city.

The Asylum started their mockbuster trend in 2005 when the Steven Spielberg War of the Worlds (2005) was announced. They quickly realised that the original H.G. Wells novel was now in public domain and jumped in with their own enterprising mockbuster version War of the Worlds (2005). They then set off on a bunch of other adaptations of works that were in public domain, including King of the Lost World (2005) based on The Lost World (1912), Allan Quatermain and the Temple of Skulls (2008) based on King Solomon’s Mines (1885), The Land That Time Forgot (2009), Princess of Mars (2009), Troy: The Odyssey (2017) plus a number of mockbuster versions of public domain stories that were also released at the same time as big-budget adaptations were, including the likes of Journey to the Center of the Earth (2008), Sherlock Holmes (2009), 3 Musketeers (2011), Grimm’s Snow White (2012), Hansel & Gretel (2013), Jack the Giant Killer (2013), Hercules Reborn (2014), Sleeping Beauty (2014) and King Arthur and the Knights of the Round Table (2017).

Here Jules Verne has been updated (and gained an extra ten thousand leagues – given that the film’s setting of the Marianas Trench, the deepest part of the ocean, is only two leagues down, it is clear that the scriptwriter has done little research on naval distances). Gone from this version is Captain Nemo’s vendetta against all ships of war – unspoken is now the fact that in this film the heroes are made into members of the US Navy, which would in any accurate version surely make Captain Nemo into a terrorist.

Now Nemo has developed a much grander super-villain scheme to obliterate the entire surface world with purloined nuclear missiles and relocate underwater – shades of the James Bond film The Spy Who Loved Me (1977) – using Lorenzo Lamas’s invention of a device that creates an air bubble to make habitable a sunken city he has discovered (which is said to be all of Atlantis, Mu and Lemuria).

Professor Arronax is now a naval commander in a submersible, while his aide Conseil becomes a woman and Lorenzo Lamas’s ex – one of those ex’s where the two would reconcile if the two of them only realised how much they both still cared about one another. Nowadays, the invention of a submarine is old hat and so The Nautilus becomes a super-sub (a floating city, we are told) with a population of guests – even its own indoor disco we see at one point – who have been indoctrinated with Nemo’s use of a mind control device.

The film tries to create a sense of underwater adventure on a low-budget with people sitting in control rooms urgently spouting naval doubletalk but does little to convince. The underwater scenes consist of stock footage and some extremely cheap CGI, in particular the shots of a giant squid trying to drag the submersible down. (Indeed, it is quite possible that 30,000 Leagues Under the Sea managed to avoid any actual underwater or at sea shooting altogether). The film has a cheap canned score.

Director Gabriel Bologna is better known as an actor – he is the son of actor Joseph Bologna. He subsequently went on to direct the horror film The Black Waters of Echo’s Pond (2009), the horror comedy Boston Girls (2010) and the South African thriller African Gothic (2014).

Screenwriter Eric Forsberg was one of the more interesting talents working at The Asylum, directing the interesting Alien Abduction (2005), the unbelievably gory zombie film Night of the Dead “Leben Tod” (2006), Mega Piranha (2010) and Clown (2019), while he has also written the screenplays for The Asylum’s Snakes on a Train, War of the Worlds 2: The Next Wave (2008), Age of the Hobbits and Troy: The Odyssey (2017).