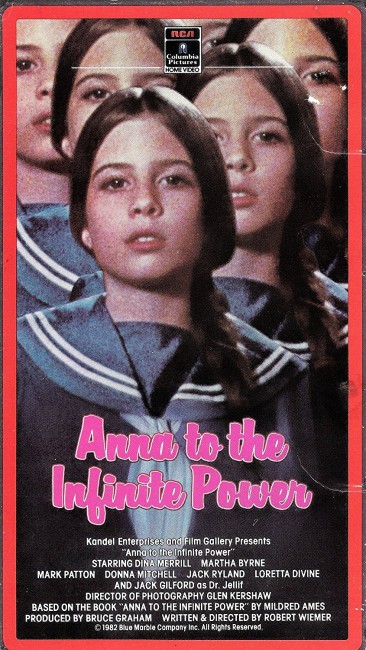 Twelve year-old Anna Hart is a child prodigy, a genius at maths and intending to become a physicist. She is also incredibly arrogant and a compulsive kleptomaniac. One day, she sees a girl on tv who is the spitting image of herself, also named Anna, being interviewed as the survivor of a plane crash. Gradually she comes to discover the truth about herself – that she is one of several clones made of the brilliant physicist Anna Zimmerman who nearly completed plans for a physical replicator before she died and has been cloned in the hopes of reproducing her research. At the genetic research institute that gave birth to her, Anna discovers that the experiment is being regarded as a failure and the institute now wants to dispose of the clones.

This is a children’s film that surprisingly confounds one’s expectations and develops a notedly intelligent story. It is sort of a more benevolent version of The Boys from Brazil (1978). Cloning is presented realistically – the scripters, for once, do not present the clones not as instantaneous copies. (A few incredulities creep in for the stickler – the fact that people are surprised about the problems of the clones individualising and developing their own personalities is somewhat hard to accept knowing what we do about developmental psychology).

Anna to the Infinite Power offers a particularly believable picture of a highly intelligent child. Here Martha Byrne giving a standout performance of fierce determination – particularly good is the psychological battle between she and Dina Merrill. The way in which the story eventually allows her to grow up and soften is touching. The result is a surprisingly intelligent fable about growing up that has been allegorically cast as a self-determination vs genetic predeterminism parable.

Another surprise is the twist revelation at the end – which contains a good performance from Jack Gilford who slides between a grandfatherly warmth and cold manipulation with disturbing regard. It is an ending that holds considerable fascination as much for the surprises it unveils as for the ambiguity it leaves a genre such as the children’s film, which traditionally relies on happy resolutions to end on.

Where the film falls down considerably is in its flat and dreary directorial style. It is largely a cerebral and story-driven film and the attempts to pump up excitement with grafted-on biplane chase sequences seem badly out of place.