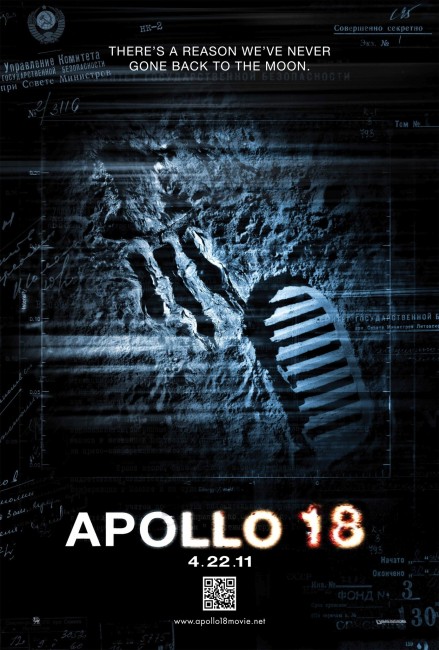 In 2011, a website unearths and airs film footage from the officially denied Apollo 18 mission. In 1972, the NASA Apollo missions to The Moon had been cancelled following Apollo 17. The footage shows how the three astronauts of the proposed Apollo 18 were called back up and a new top-secret mission launched under the aegis of the Department of Defense. They landed on the Moon and the two-man lander crew began to film everything as they explored and took samples. They discovered a Russian Moon capsule nearby but realised that something had happened to the cosmonauts. While outside, Nate Walker complained that something was inside his spacesuit. Afterwards, it was found that one of the rocks had dug into his side. They then found that the rock samples they had brought back were moving independently and were in fact insect-like creatures. Nate’s behaviour became increasingly unstable as the creature started to take over his system.

Apollo 18 is one such Found Footage effort from Spanish director Gonzalo Lopez-Gallego. Lopez-Gallego gained reasonable festival exposure a few years ago with his third work, the Backwoods Brutality film King of the Hill (2007) and Apollo 18 was his English-language debut. The film is produced by Timur Bakmembetov, the Russian director who made a big international splash a few years ago with Night Watch (2004) and its sequel Day Watch (2006) and has since gone onto English-language films such as Wanted (2008) and Abraham Lincoln, Vampire Hunter (2012), as well as producing a number of other projects including 9 (2009), The Darkest Hour (2011), Unfriended/Cybernatural (2014), Hardcore Henry (2015) and Unfriended: Dark Web (2018).

Apollo 18 is one of the more unique and cleverly conceived films in the Found Footage genre. While most of the other films mentioned above simply concern themselves with following people around with video cameras or replicating camcorder and security cam footage, Apollo 18 far more sophisticatedly goes to the extent of conducting an exacting copy of the Apollo Moon landings. The look and design of the capsules, Moon buggies and equipment, the raggedness of grainy tv and movie camera footage has been replicated in great detail. Even the Moon’s surface looks perfectly desolate and arid – and with scientific accuracy has a lowered horizon rather than looks like an ordinary rocky terrestrial landscape as most filmmakers have it.

In terms of approach, Apollo 18 falls somewhere between being a mix of Alien (1979), Apollo 13 (1995) and Paranormal Activity – from which it borrows the effect of watching creepy things happening in the corner of the frame of a static camera. The film is certainly more controlled than most modern horror films, spending much of its time during the first half dealing with the detailed replication of the mission launch and exploration of The Moon. It received some negative reviews and there were a few audience walkouts at the session I was at but this is largely because it is a film of slow build-up rather than one that goes for the quick and easy jump that contemporary audiences expect.

That said, when you go with what Gonzalo Lopez-Gallego is doing, the film produces a number of creepy moments with rocks and insect creatures scuttling away around the edge of periphery. The action has been cut in a way to make sure we only the briefest of glimpses of the creatures. The complaint about the film might be that Gonzalo Lopez-Gallego never pushes the material for something go-for-the-throat as Alien did. You exit feeling it should have ended with a punch to the gut – maybe akin to the final shot of [Rec] – and there is a sense of dissatisfaction in that the film never does.

Gonzalo Lopez-Gallego next went onto direct the horror film Open Grave (2013) and the non-genre The Hollow Point (2016).