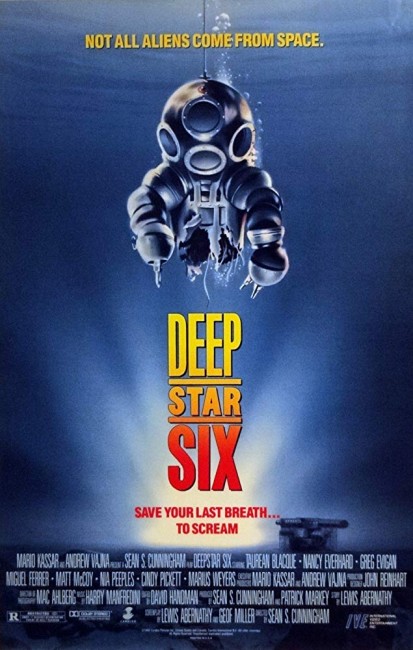 A US Naval Engineering team is constructing an underwater nuclear missile launch platform. During excavation of the ocean floor, they accidentally uncover a previously unknown form of life, which proceeds to attack the installation base. With the pressure lines broken, they are unable to depressurise the escape pods. And with only eight hours before the overheating reactor explodes, the survivors have to fight the creature off as it invades their submarine habitat.

With the announcement of James Cameron’s big-budget The Abyss (1989), dozens of penny-ante operators rushed to the fore with their own variations of Aliens Underwater, assuming that Cameron was attempting a submerged version of his previous hit Aliens (1986). Of course, when The Abyss premiered it turned out that it wasn’t an underwater monster movie type of film at all. 1989 still offered up an instant fad of underwater monster movies anyway, from the reasonably well budgeted Leviathan (1989) to cheapies like Roger Corman’s Lords of the Deep (1989) and the Spanish The Rift/Endless Descent (1990).

Of these, first off the mark was Sean S. Cunningham’s entertainingly cheesy Deepstar Six. It was probably copied from the even more parsimonious Destination Inner Space (1966). Cunningham had started the decade off with his massively successful B-budget hit Friday the 13th (1980), although he never followed that success up in any substantial way and remained making forgettable B-movies. (See below).

Certainly, Cunningham is not above stealing from himself to fuel his shocks here – like mounting Friday the 13th‘s just-when-you-thought-they’d-escaped climax over again. That is only half the generic cliches Cunningham poaches, the mild surprise being that a few of them work. Deepstar Six is not as bad as many made it out to be back when the film was released.

Sean S. Cunningham conducts the suspense and running around the underwater habitat with competent regard. There is a good deal of unintentional baloney that adds immeasurably to the basic entertainment value – like Miguel Ferrer (the film’s most enthusiastic over-actor amid the cast of mostly former tv stars and bit-players)’s death by an absurd case of the bends, or Marius Goring’s despatch by injection of explosive oxygen pellets. The monster is designed in such a way that it would have good deal of difficulty actually eating anything – in one of the more improbable moves, it appears to be capable of biting a two-ton pressure suit in half, yet is restrained by a mere bulkhead door.