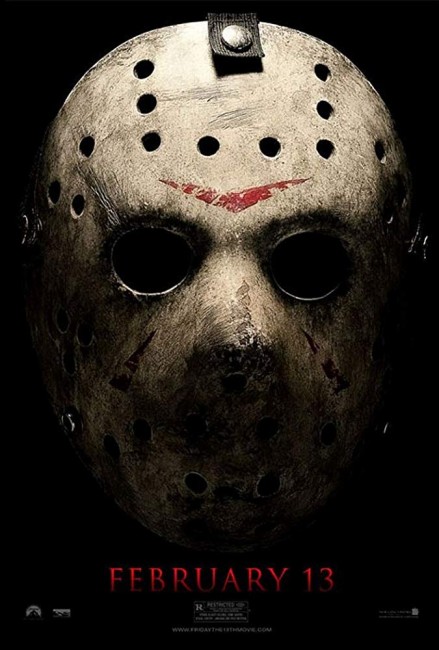 A group of young people go hiking near the old Camp Crystal Lake summer camp. They tell of the legend of Mrs Voorhees who slaughtered counsellors back in 1980, believing them responsible for the drowning of her deformed son Jason. However, Jason is very much alive and now attacks and slaughters the party. Six weeks later, a group of friends head to the holiday home of Trent’s parents near Crystal Lake. At the same time, Clay Miller is searching the area for his sister Whitney who was among the missing hikers. Jason now appears and begins slaughtering his way through the group.

Friday the 13th 2009 is made by Michael Bay’s Platinum Dunes production company. Platinum Dunes could be considered the prime instigators of the 00s horror remakes fad, they being behind other horror remakes such as The Texas Chainsaw Massacre, The Amityville Horror, The Hitcher, A Nightmare on Elm Street and Teenage Mutant Ninja Turtles (2014), as well as original genre films like Horsemen (2009), The Unborn (2009), The Purge (2013), Ouija (2014), Project Almanac (2015), A Quiet Place (2018) and the tv series The Last Ship (2014-8). To this extent, they have brought back Marcus Nispel, who made his directorial debut on The Texas Chainsaw remake, and went onto make a modernised tv remake of Frankenstein (2004), the non-genre Pathfinder (2007) and subsequently the remake of Conan the Barbarian (2011) and Backmask/The Asylum/Exeter (2015). (Sean S. Cunningham, director of the original Friday the 13th, is also present as an executive producer). Where Marcus Nispel and Platinum Dunes succeeded in reworking Texas Chainsaw in a way that inspired a glut of horror remakes that shows no sign of slowing down at the box-office, remarkably little of the same can be said for their Friday the 13th.

For all that it is a remake, there is little that Friday the13th 2009 does that is any different from the preceding eleven Friday the 13th films. It has a bigger budget and a cast who could be considered mildly well known if one is obsessed with keeping track of who are the hot names among the 00s teeny generation. And that is about it. Maybe also the look has much more gritty texture than the rest of the series, which are all shot with plain textbook camera set-ups. Perhaps the most noticeable difference is that, unlike Friday the 13th 1980, this version has Jason Voorhees stalking the cast. As Scream (1996) made a trivia question out of, Jason did not become the hulking masked killer until the first sequel Friday the 13th Part 2 (and did not adopt his trademark hockey mask until Friday the 13th Part III in 3D). The killer in the original was revealed to be Mrs Voorhees, although a misshapen boy figure did appear in Adrienne King’s nightmare at the end. (If anything, Friday the 13th 2009 could be more properly considered a remake of Friday the 13th Part 2 than of Friday the 13th 1980). Certainly, it does retain Mrs Voorhees in a brief prologue (where she is played by of all people Nana Visitor alias Major Kira of Star Trek: Deep Space Nine (1992-9) fame), but the bulk of the film features a hockey-masked Jason stalking people.

In many respects, Marcus Nispel gets down and gives us what we expect of a slasher film. There are a number of novelty killings – Ryan Hansen shot through the head with an arrow while at the wheel of the boat; Richard Burgi impaled by a spear that goes through a door and out the other side; various machetes and axes to the heads and bodies of victims; a couple of particularly novel despatches where Willa Ford is trying to hide under the pier only to be impaled through the slats by a machete and where America Olivo is burned alive inside a sleeping bag hung upside down from a tree. Perhaps influenced by the modern Torture Porn fad, Marcus Nispel seems to dwell on the brutality of these deaths more than the originals, which tended to be fairly cut and dried about such matters. Unlike the chaste modern slasher films that came out post-Scream, Marcus Nispel is not afraid to get his actresses topless. Indeed, the film features so many topless women with clearly plastic surgery enhanced chests that it is in danger of toppling over into self-parody.

The characters have no more depth than they did in any of the other Friday the 13th films – all but Jared Padalecki (and his sister) fail to even given the benefit of a surname (as is the case with the characters in almost every other Friday the 13th film). The only character who is in danger of anything more than this is Arlen Escarpeta, who mostly seems there so the film can keep throwing in lines challenging Black stereotypes in films. (If nothing else, this is a Friday the 13th that breaks up the ethnic diversity of the whitebread original).

The biggest disappointment about Friday the 13th 2009 is that it gives us no Final Girl (the term applied by film academic Carol J. Clover to describe the girl who always survives a slasher film and is usually painted as studious, nice, does not fool around or get naked and have sex like the other girls). Danielle Panabaker seems to be set up to inherit the role (being the only innocent seeming, nice girl who never gets undressed), yet she is killed off just before the climax, leaving the survivor roles to be inherited by Jared Padalecki (the first time in a Friday the 13th film that the Final Girl role has been inherited by a guy) and his sister Amanda Righetti who has spent almost the entire film chained up in Jason’s lair. It is confusing because it defies the pattern of every single other Friday the 13th and slasher film. One wonders whether Marcus Nispel and company were trying to be clever and subvert expectations but it is a move that throws off the sympathies built up throughout. The point that Marcus Nispel fumbles it altogether is the coda where Jason’s body is dumped in the lake, only to burst up through the pier to attack the survivors, which only seems a pallid attempt to produce the same jump in the seat that the dream ending of the original did.

One of the features of these modern remakes is that they often attempt to add a layer of depth to the originals, usually in terms of motivation/explanations as to why the monsters became who they are – see the remakes of Black Christmas, Halloween and especially The Texas Chainsaw Massacre: The Beginning (2006). Marcus Nispel tries to do this somewhat, recapping the Mrs Voorhees story and showing us Jason first putting on the hockey mask. We even visit Jason’s lair. The problem with doing this is Jason is a character that exists more by his lack of human features and impulses (other than to kill). To try and humanise him is to completely dismantle the character. Understandably, the film does not tinker too much with the basics. Although in giving Jason a lair filled with junk and human remains, as well as filling the local township with psychotic hicks and unfriendly, possibly mentally disturbed people, what we end up with is a film that resembles Marcus Nispel’s Texas Chainsaw Massacre remake more than it ever does a Friday the 13th film.

One of the disappointments about Friday the 13th 2009 is that Marcus Nispel does so little with it other than rehash the basics. Watching Friday the 13th 2009 after having seen Scream and sequels, which created an entire sub-genre out of spoofing and deconstructing the conventions of the slasher film, even later more ironically self-aware Friday the 13th entries such as Jason Goes to Hell and Jason X, it is hard to watch these being served up all over again and not seeming like hoary cliches – a problem that the Prom Night remake also suffered from. Marcus Nispel’s take on The Texas Chainsaw Massacre put the original through some interesting and unexpected twists but he fails to deliver the same here. Friday the 13th 2009 could have done so much more – it could have filled the characters with depth; it could have deconstructed or subverted the cliches; it could have drawn the basics out to a level of gruelling suspense. Only it does none of these things. It is just another Friday the 13th film by the numbers – but with a bigger budget.