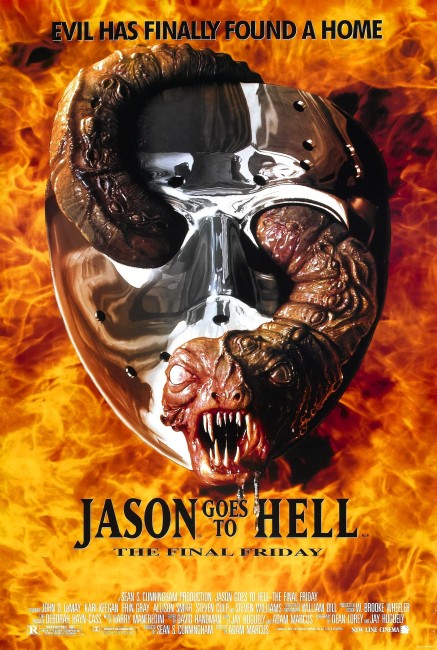 The FBI’s serial killer unit finally succeed in trapping Jason Voorhees and blasting him away in a hail of artillery fire. On a tabloid tv programme, bounty hunter Creighton Duke argues that Jason is not dead. On the autopsy table, the parasite that has kept Jason’s corpse animated emerges, takes over a coroner’s body and starts passing between other bodies, continuing its killing spree. Up at Crystal Lake, Steven Freeman realizes that Jason is trying to find one of the surviving Voorhees family members so that he can obtain a new body. As Steven races to protect his girlfriend Jessica, the last surviving Voorhees descendant, he ends up being blamed and hunted by the police for the spate of killings.

Paramount, who had made all the other sequels up to that point, sold their interest in the series back to original director Sean S. Cunningham. Cunningham then sold the series to New Line Cinema, the producers of the A Nightmare on Elm Street series, who successfully revived the series for another (to date) four entries, beginning with this. The New Line Cinema Friday the 13th films are much better than the Paramount-produced ones – they seem to be made by fans of the series, for one – and seem happier to play around with new ideas, get meta and turn expectations on their head.

Surprisingly enough, the ninth film is the best of the entire series. (Oddly enough, the only other halfway worthwhile entry in the series was also its other final chapter). It is also the most radical departure from the series’ limited formula, with the plot coming closer to The Hidden (1987) than anything resembling a traditional Friday the 13th film.

The film plays around with and parodies the series’ mythology – and rather cleverly too. The introduction of the parasite concept neatly manages to explain away Jason’s apparent invulnerability and ability to return from near-total death. The film plays with the series conventions – a cliche camera point-of-view voyeurism sequence at the beginning is wittily expanded out to prove a deliberate set-up by the FBI. The film sends itself up – “You’re going up to Crystal Lake for some premarital sex and a bit of slaughter?” jokes hero John D. LeMay at one point, while in the background up at the lake we see merchandising stalls selling hockey-mask shaped burgers.

In the 1980s, the Friday the 13th films were about teenagers being punished for having sex, but as society has changed and passed a tacit if grudging acceptance of teenage premarital sex with the safe sex message, so has the film’s message changed with Jason now amusingly slaughtering a couple of teenagers who fail to use a condom. Also in that, following The Silence of the Lambs (1991), the horror genre has changed its boogie man from a faceless slasher to a serial killer and a fascination with forensic psychology, Jason is now made into a serial killer hunted by the FBI.

As a film, Jason Goes to Hell: The Final Friday is well made – it is one of the few films in the Friday the 13th series that could be said to be directed with style and suspense rather than only being a catalogue of novelty deaths. It also the only Friday the 13th film in which a character can be seen crying over the slaughter of one of the victims. The plot does not bear too much in the way of close scrutiny – the bit about Jason only being able to be killed by a member of the Voorhees family is an irritably stock plot device. And the film has its share of silly scenes – like one where Jason slaughters a victim by shaving him to death!!!

True to the title’s promise, Jason is sent off to Hell at the climax, although one had little doubt that The Final Friday would have been final. If there was any doubt, New Line Cinema, who purchased the rights to the Friday the 13th franchise from Paramount, throw in an amusing coda where the steel-clawed hand of Freddy Krueger (New Line’s other horror franchise who had long been rumoured to face off against Jason in a film), pops out of the sand to snatch away the dropped hockey mask. New Line brought the two together a couple of films later with Freddy vs. Jason (2003).

Adam Marcus subsequently went onto direct the non-genre likes of Snow Days (1999), Conspiracy (2008) and Secret Santa (2018), while he has also returned to genre material with the script for Texas Chainsaw (2013).